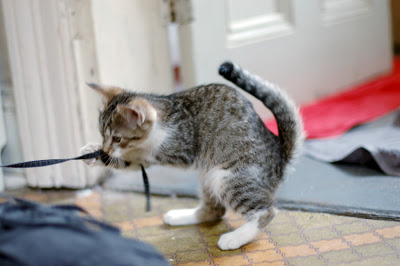 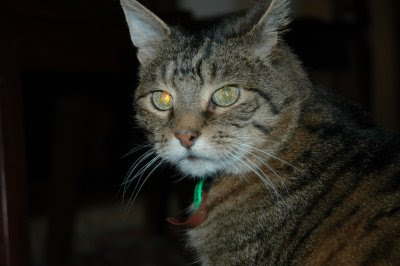 Winston pissed in the corner near the kitchen cupboards again this morning. He left a puddle deep enough for the apron ribbons to float into. The aprons ordinarily hang from the kitchen cupboard door.
Last time I washed them in similar circumstances, I told myself that I must not put them back there again or I must hang them in such a way as their ties do not reach the floor. But do you think I took my own advice?
I am ever the optimist, I hoped it would not happen again, and of course it has. So the aprons are back in the wash and another old towel has met its fate in the rubbish bin. It’s the easiest way to clean up the cat’s leakage.
I was going to say the great cat, but Winston is no longer a great cat. Winston has shrunk to half his size. I understand from our neighbors that he has kidney disease. They intend to keep him alive as long as possible. He is not their cat but they take responsibility for him. They provide a warm home for him on their veranda at night and they let him in by day. It’s okay for them, Joanna is retired and spends most of her time at home. She can keep an eye on Winston and take him outside whenever he makes ready to pee.
If ever Winston sneaks inside here by day as soon as someone sees him, we throw him out, but it’s not so easy at night while we sleep. On top of which, I lock the exit cat door to keep our cats in at might and once Winston has made his way inside he can’t get out even if he wants to, without human intervention.
Why don’t I lock the cat door entrance, too, you might ask? I would, except that when I close the exit door shortly before bedtime our most intrepid cat, Anoushka is usually not yet in. I refuse to run around the back yard and neighborhood looking for her and I know that she will come in of her own accord soon, so I leave the cat door open for her.
‘You should just leave Anoushka out for the night and shut the cat door both ways,’ my second daughter tells me. She is as sick of the puddles on the floor as I am. Her pink apron has already been soaked in Winston’s pee at least three times.

Winston is an orange red cat who once had a home somewhere in Beaconsfield Road nearby. He used to be fat. He traveled the neighborhood looking for food and was obviously quite successful. But then, one day it seemed, he had no home to go to. Our neighbour, Joanna, figured his owners must have left the area and abandoned him. She took Winston under her wing, scraggly cat that he is. She has a collection of Siamese cats who live permanently indoors. Now that Winston is ill and prone to peeing wherever and whenever he sees fit, he has become a burden.

‘I wish he were dead,’ I said to my daughter. I hauled the aprons into the washing machine and covered them in liquid soap. ‘He’s not fit to be alive.’
I’d be happy for Winston to live on as long as he’s not in pain, and as long as the neighbors want to take responsibility for him, but I do not want to have to deal with his pee anymore.

These days two of our daughters have been clamoring for a dog.
‘We need a dog,’ they say. Ella’s home for a few years yet, but Millie’s likely to leave soon. Rosie who always wanted a dog when she was little, such that we once gave her a gigantic toy dog for her birthday, complete with engraved dog tag, Towser, seems unfussed at the moment. She too plans to leave home soon.

I am adamant, no dog. My husband might relent. I suspect he’d love a dog. He grew up on a farm, but we cannot have a dog at the moment. Where’s the room?

We need a water tank, more than we need a dog. Where’s the room for that, a water tank that is? It’ll destroy the aesthetic balance of the back yard, but the roses under the eucalypt are water stressed, they probably won’t make it through another summer unless we do something.
Today my husband plans to install a soaker hose. They’re legitimate during this drought, but I’m hankering for a water tank, however ugly.
All this talk of financial doom and gloom, juxtaposed with the coming summer, and dams only 36.4 percent full, down on this time last year, focuses me on prevention before it’s too late, and that does not include a dog.
‘We will get a dog once the cats are all dead,’ my husband says. That includes three cats, all of whom are aged under four years, that’s at least a decade away. The girls maybe can install their own dogs in their own homes by then.

I would include a picture of one of our cats but I can’t find one at the moment, nor do I have time to find one elsewhere. So here in the glory of adding images to my blog I will try to include a picture of Lotta, my oldest daughter’s cat, now no longer the kitten she once was in the photo. A cat photo for effect.

The older cat is Pickles, our tabby, who died last year at seventeen years. Winston has taken on the look that Pickles developed shortly before he died, but Pickles was much loved and his passing mourned. Not so for Winston.