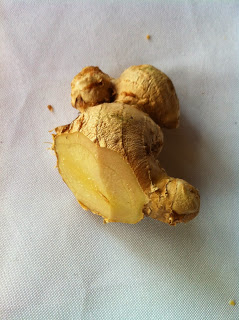 Have I told you how much I hate ginger?  For all its apparent medicinal
qualities, the taste of ginger makes my mouth water even as I write about it,
not the mouth watering sensation that says I’m-keen-to get-into-this-food type,
but the mouth watering that happens when I’m ill and nausea creeps up from the
ache in my gut to my mouth and my nose.

My husband, on the other hand, treasures ginger.  He drinks it as tea.  In deference to me he leaves fresh
ginger out of most of his cooking though lately I’ve noticed he’s been sneaking
it into some of his fish pies, as if he imagines I will not detect it – not
when he introduces the ginger gradually, surreptitiously.
This reminds of those desensitization experiments we tried
when I was studying basic psychology years ago.  The idea that if someone is phobic about something, say
phobic of kitchen brooms, you gradually introduce them to things that remind
them of brooms and little by little, up the ante, until they are finally face to
face with a real broom.
Either this exposure will cure them of their phobia or it
will drive them mad, or so one of our lecturers told us.  It struck me then as a risky
business.
My husband’s efforts to introduce ginger into our diet
have not cured me.  I still hate
the stuff.
Why does it give me satisfaction to announce one of my pet
hatreds with such equanimity?
I
recognize there are many people who have difficulty with the word ‘hate’,
almost as much as I have difficulties with ‘ginger’.
It’s as if the word ‘hate’ becomes the state of mind
called hatred, and to hate someone is to do damage to them simply through your
feelings.  I suppose hate has that
absolute quality.  Very black, on
the continuum of black to white.
We were out to dinner last night in a cheap and cheerful
dumpling place on Glenferrie Road.
We had ordered from the menu, avoiding all things ginger, filling up
fast on dumplings as our entrée.  I
sat facing the door, which meant I could not spend too much time staring at the
other diners in the restaurant.
My husband sat beside me, my daughter opposite.  She had a full view of inside the
restaurant but did not report on it to me.  She preferred to keep me in the dark.
It’s rude to stare.
I know this but I cannot stop myself when even mid-conversation with my daughter and husband, an
activity elsewhere catches my eye.
There on the periphery of my vision the fascinating movements of others,
and although we sat at the door of the restaurant and could only see people as
they came in and went out, there was plenty of action.
The door kept jamming.  People arrived and could not get inside without exerting a
huge shove at the door.  Then some
forgot to close the door once they were inside.  The springtime winds are turbulent at the moment and the
door left unsnibbed sprang open every time a gust caught it.
A couple of older women on a table parallel to ours copped
the full blast whenever this happened. I watched as they complained. I watched
as one of the waiters, seemingly one more senior, spent much of his time
running back and forth to catch the door and seal it after some careless person
had left it open yet again.
‘Don’t stare,’ my daughter said, but even she turned to
look when a youngish man went to leave and staggered at the door.  His friend, a young woman followed
close behind.
‘You can’t go out
there,’ the young woman said just as the man collapsed beside her.
Then a great flurry of attention.  ‘Call an ambulance,’ the girl said to
the waiter and everyone grabbed their mobiles, including my daughter.
The restaurant staff made the call and
handed the phone to the young woman who talked to the ambulance people.  She gave the impression she knew what was
happening.
‘Stay with us,’ she said leaning over the collapsed man on
the floor.  She nudged at his inert
body.
‘A drug overdose,’ I said to my daughter.
In minutes, the young man came to.  Staff helped him to his feet and then he went to
sit outside on a bench in front of the restaurant with his friend, a couple of staff members and other
passers-by who had elected to stop.
How could I not stare? I was trying to work out the story
in my head.  I had decided by now it was
not a drug overdose. The man seemed too alert, too clear eyed even from a
distance.
Maybe he was a diabetic.
In time the ambulance came and as we left the restaurant
ourselves I saw the young man and his friend seated in the ambulance in
conversation with the paramedics.
All seemed well by then and I told myself I must not pre-judge and decide
that some one has overdosed any more than than I should avoid all things ginger.
It might open my mind to the possibility of a new taste even
if it makes my mouth water just thinking about it.