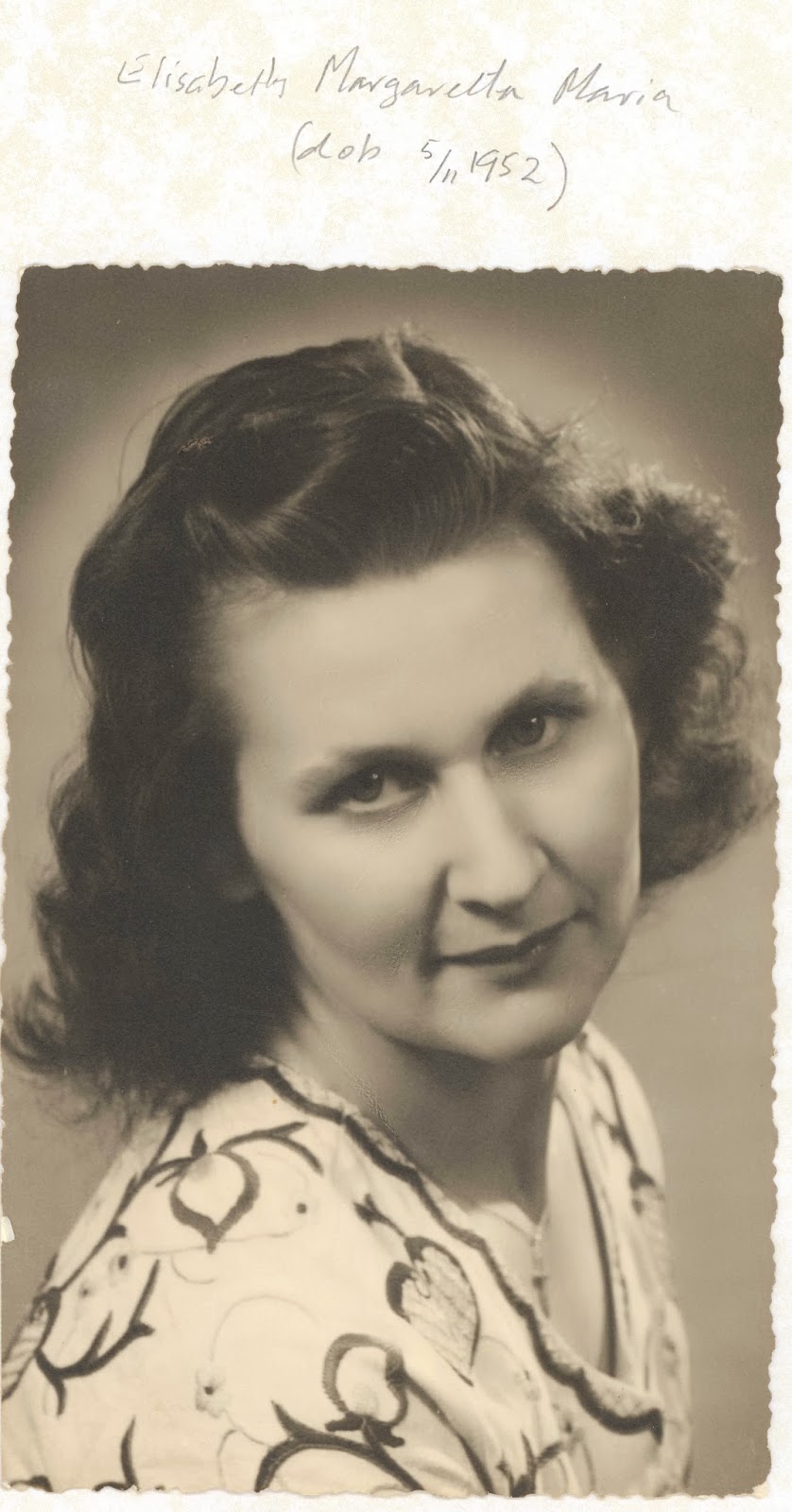 ‘Why,’ I ask my mother, ‘do you always look on the bright
side?  Why this need to compare
your lot to that of others.’
To my
mother there is always someone worse off, even in the worst of
circumstances.
She gives me a wan
smile.
‘We lived through two world wars,’ she says.  ‘We were hungry all the time.’
My mother draws a deep breath. ‘Once I woke in the night and someone was chopping down our
tree.  It was not really our tree
but we called it our tree because it was on the other side of our house and we
had planned for a long time that it was ours.’
My mother dabs a tissue to her nose.  She goes through tissues as though she
has an unlimited supply.  The
wastepaper basket beside her chair is filled to overflowing with these tissues.  I think of them as my mother’s tears, the
ones she can no longer shed.
‘Everyone everywhere was chopping down trees for firewood,’
my mother goes on.
‘I woke my husband and he went outside and chased them
away.  By then the tree was half
hanging and so he chopped it right down and managed to get it over the back of
our fence. We were staying with my parents at the Marnixplein.  We had just managed to get the tree
over our fence when the German soldiers came and shot their guns in the
air.’
My mother hesitates, whether
for effect or out of her memory of this time.  I can see the garden, the fence, the tree in my mind’s eye as if a scene from a movie.
‘Just in time,’ my mother says in her lopsided English,
‘because now the tree was inside our back garden.  It was ours.  Still, we were hungry all the time.’
My mother takes a fresh tissue and folds it in four, ready
for the next dab of her nose.
‘Once we went on our bikes to the north of Holland and we
brought with us things.  I brought
a beautiful table cloth, what I had embroidered for my mother.  It took me a whole winter to sew.
The farmers didn’t want money, they wanted stuff.  Someone took the table cloth and we got
something to eat for it.’
My mother is on a roll. Tissue, nose dab, wastepaper basket
and words.
‘Once there
came beggars to the door.  My
mother offered them what we were eating.
They looked at it, smelled it and then went away.  Even they did not want it.  Some people who were really rich, they could buy on the
black market and they did.’
My mother stops again, as if to take stock of her
memories.
‘What you got when it was time to eat, very little.  My mother would dish up for
everybody a little and everybody made sure that the one next to them didn’t get
a crumb more.  People started to
hate each other because there was never enough to satisfy your hunger.’
I feel a slight thrill inside at the mention of the word
‘hate’.  My mother rarely owns up
to such a powerful emotion.
She never owns her hateful feelings – at least not out loud, at least
not to me – but here she is telling me that she too knows what it’s like to
hate.
‘It took quite a long time till the war was over and then
we heard that from Sweden there would come planes and they would drop  packages of margarine, of bread and
butter.  Everybody got their share
and you saw people, they were so starving, sitting on the street.  They got the food and they started to
eat it.’  My mother’s eyes gleam
with the memory.
‘But my mother said, “Don’t do that.”  It’s not good to start eating when your
body was so hungry.  You have to
eat a bit at a time.’
She looks
down at her hands in her lap and as if unable to bear the sight of them empty, my mother  takes up another tissue.
‘I had somewhere a photo of myself and I was that
skinny.  Never in my life have I
been as skinny as then.  There were
photos of my dad and mum and they looked ten years older. 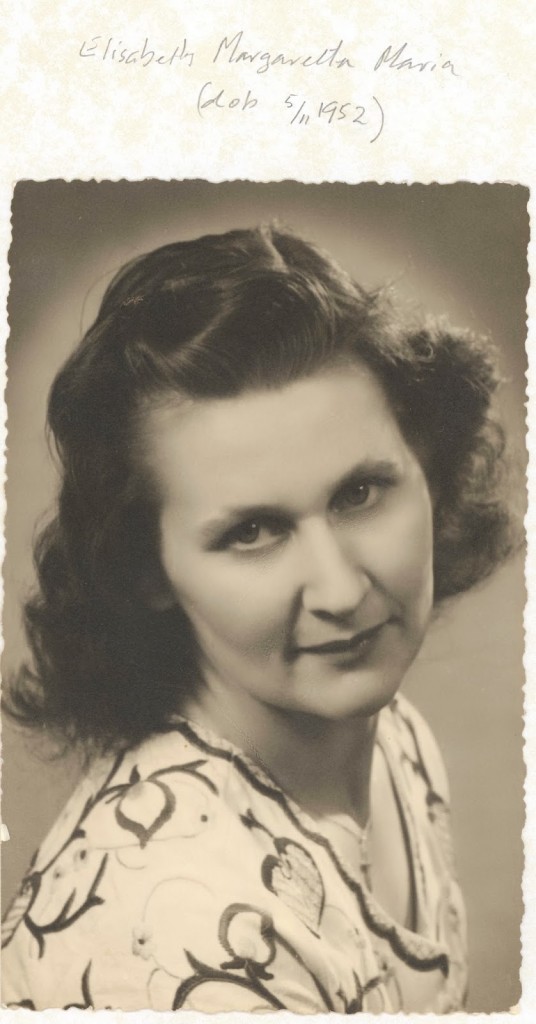 My mother around this time in a blouse she embroidered herself (the birth date above belongs to me, strange that someone has accidentally given it to my mother who was born 5 October 1919, strange but understandable given my mother and I share the same name).
My mother continues, ‘The priests in the country churches said, “If you have
family bring them here.  Let them
come.”  Because there’s nothing in
the city.  In the country, not
so.  In Heilo where we had cousins,
next to them was a farmer. They had milk.  The family said bring your baby and little child and we can
feed them here.
‘We went on our bikes without tyres and my husband had a
little cart behind his bike.’
The story shifts here. My mother has told me that my
father had a bike with a cart in which my older brother, then something like
two years old, traveled.  My mother
pushed her pram with the baby, who later died and is buried in Heilo.
My older sister who died at five months of age during the
Hunger winter of 1945.  I have
wondered what she would be like had she survived. 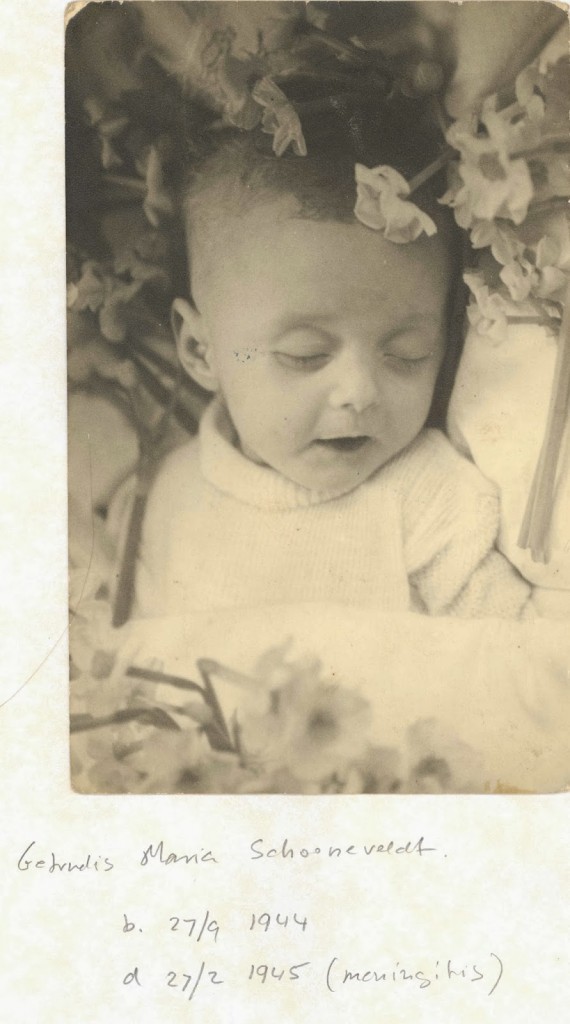 4 thoughts on “My mother’s story”