Skip to content
You’re a fool, you know that.  A fool to think your body would not start to
decay. A fool to imagine your heart would kick on unimpeded forever.
The blind optimism of your mother.  Even she could not hold out against
death.
It’s less than a year since my mother died
and already my mortality hits me in the face.
I’m next in line of the generations to die and although in this world of
never ending youth, or at least the pursuit of it, I’m not that old yet, I sometimes
feel it.
Science could let me have another
baby if I put my mind and money to it, but I’m past the grandiosity or the desperation of such a
move, only I resent my blood pressure rising.
I’m lucky, the doctor told me at my
last visit, I have symptoms, light-headedness, pressure in my head.  Some people don’t notice until it’s too late
and then, kerplunck, they’re dead.
The doctor made taking Coversyl for hypertension sound
as commonplace as taking Panadol for a headache.
Once you’re past a certain
age, once in your fifties, or past sixty, you’re likely to need it.  It’s like with cars.
They wear out, so do bodies.
‘If I asked the population of
people over fifty to put up their hands, at least fifty per cent or more would
be on Coversyl, sooner or later,’ the doctor said.
And so my fate is sealed.  Five milligrams of the tiny blue pill and in
the morning my blood pressure on my home machine had dropped to below 120 over
68.
What’s in this stuff.
The placebo effect must in there somewhere,
too, because as soon as I took that small blue pill I began to feel better.
I’m so persuadable.  Give me a
doctor whose argument sounds reasonably sound and I’m off, following his advice, but I
won’t be decided completely on this course of action, this reading of past events,
until I see my female doctor, the only one I trust, and then hopefully things
will settle down. 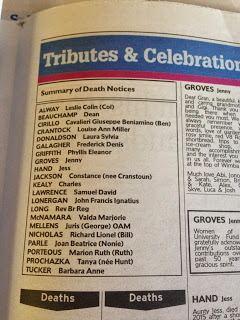