My mother learned to drive late in life. She was over forty years old when she first took us out in the pale green Farina my father had bought for her, through the leafy streets of Camberwell to visit relatives in Ivanhoe or Brighton, or to take us to the beach.

It was a hot day and the car was full of kids, me, my two younger sisters and my brother and we passed the Trafalgar Road intersection off Burke Road on our way through the Camberwell junction, a six way spilt across three roads, Camberwell, Riversdale and Bourke.

In those days there were no lights at the intersection and the give way to the right system applied. Nor was there a roundabout, which made it tricky to get through the intersection even at the best of times.

The car seats were wet against our hot bodies and we had the windows down to let in air.

‘My brakes aren’t working’ my mother said as we slipped past Our Lady of Victories, the church on one side of the hill. It boasted a huge ball of bronze at the top of its central dome above which rested a statue of the Blessed Virgin Mary in gold with a crown, sceptre and baby in her arms.

I had no time to admire the church, no time to think as my mother pushed her foot onto the brake, which offered no resistance. It hit the floor, and the car rolled on.

Her foot went down again and again as she tried to get traction. There was no slowing down as the car gained momentum on its approach to the bottom of the hill and we braced ourselves.

It must not have been our time to die for by some miracle there were no cars at the intersection on our right and even on our left, nor on the diagonal along Camberwell Road.

All clear at four o’clock in the afternoon just before the evening rush – a miracle.

Somehow my mother managed then to slow the car down as we crawled back up the opposite hill, turned right onto Prospect Hill Road and then round the back to the car park where my mother managed to stop the car dragged back by the weight of the uphill crawl. She propped it in place against a gutter.  Wheels held firm.

‘We made it,’ I said and we sighed a collective sigh, climbed out of the car and walked to the bus stop to complete our journey home.

The mechanic came later to tow the car to his garage and fix the faulty brakes but not well enough such that a day or so later after repairs had been completed, my mother pulled up, this time in Canterbury on another intersection where Balwyn Road crossed Mont Albert.

There at the lights, first car in line on Prospect Hill Road we waited till the lights turned green and I felt my mother’s Farina slide backwards closer and closer to the car behind.

My mother wrenched on the hand brake, her foot on the main brake and her hand held firm to keep the car from rolling back. But ever so slowly it crept towards the bumper bar of the car behind, until those lights changed and within an inch of coliding we took off again.

I cannot stop on a hill without thoughts of my car rolling into the one behind; no matter how good my brakes.

A few months after she began to drive, my mother had an accident in the green Farina. She was alone on her way home from work when her car collided with another vehicle she had not seen and although no one was hurt, the Farina was a write-off and spent the next several months stationary in our back yard.

My parents had neither the insurance nor the money to fix it.

Thereafter my mother gave up driving but I now dream of travelling backwards in honour of those memories.

More than once I dream of putting my car into reverse in order to get out of a situation and then find I cannot get back into drive.

Once in reverse, I roll backwards for ages and panic that at any moment I’ll crash into the car behind, only to wake before the crash, or somehow, as if by some miracle, the car locks back into second gear and I’m saved.

I have a photograph of my childhood family sheltered in one of those plastic frames and held together with magnets. It sits like a transparent block on top of my work desk, there amongst the clutter of papers, pens and other stationary in the unholy mess I call my desk top.

I look over at the crowd, all nine of us photographed the last time we came together as a group in 2009. 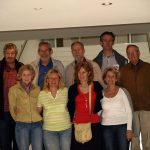 When we were young we followed the usual trajectory, each child shorter than the preceding one according to age but over the years our heights have stabilised into an irregular jumble.

At this point my husband sticks his head around my door to say goodbye. He’s off for a walk with his friend. They travel around the outskirts of Melbourne in search of walks of interest.

As I wave him goodbye I remember how two weeks ago just as I was settling into a burst of writing on a typical Sunday morning, my daughters’ boyfriend who’d just walked out to go to his work at a café in Albert Park, interrupted my flow to tell me that someone had smashed my front car window parked in the driveway and also his car window on the street. I checked further up the road and discovered another car a few doors up had also suffered the same fate.

We rang the police who offered to send a report. They would not come out to check the damage given there were no witnesses. What could they do after the culprits had run?

The vandals most likely used a fully inflated basketball, which they threw against the windscreen with full force to create the crater effect, almost identical on every car. Or so the man from Windscreens O’Brien said after he put the new glass in place. He told us that he had been called to repair the windscreens on a number of cars in our local side streets after that night.

Now I wonder, could lightning strike again? Would someone not satisfied with their first burst of damage come back for more or would they take their rage and destructive impulses elsewhere?

I have trouble understanding vandalism, the rush of satisfaction a person gets when they destroy or efface someone else’s property or perhaps even a person.

I know about the pleasures of imagining revenge but always in my fantasies, forces beyond me damage the person against whom I would have my revenge. Someone else does the deed.

In my imaginings, someone else, or something else gives them grief and I take pleasure from my opponent’s downfall.

‘Schadenfreude’ I think it’s called but it doesn’t happen much that a person whom I wish ill upon comes to grief and I’m glad of this.

Guilt would creep in fast, too fast for me. Given a lifetime of worrying as a child about doing damage even to strangers.

This preoccupation took over, whenever I saw a banana peel on the street or broken glass or something else that had the potential to attract a person’s foot as they walked by, something that could do damage if trod on unexpectedly.

I needed to remove the object and make the area safe.

It was enough to put the glass or peel into the gutter, but if I ignored it and walked past without removing the danger, the persistent image in my mind’s eye of someone coming to grief on that broken piece of glass, or someone sliding across the concrete after landing on the banana peel left me in spasms of guilt.

This is the way little people operate. They believe they are the source of everything that happens to them, at least when they’re very small. But over time they get help, mostly from parents and teachers and siblings to realise that there are things outside their control; that they’re not responsible for everything.

Forces come into play to moderate our omnipotence. Of course it’s a problem if those forces come in too vigorously. If as a small person a parent or some other person in authority, or a bully at school – it doesn’t much matter who it is – but if that other person makes the little person who thinks they’re good at something, suddenly realise they’re not, the realisation can be devastating.

Small children need to be let down gently. It does not do to crush a small person’s confidence.

Back to my siblings, all eight of them, all of us lined up, the girls in front, the boys behind, even now gendered rather than placed chronologically.

Whose idea was this to put the girls in front?

Being one of this crowd has had a profound effect on me and the person I have become. For good and for bad.

I was in a group therapy session many years ago and one of the women who had been silent for weeks managed to talk about how hard it was for her as an only child to find the courage to speak up.

Me, I find it easy to speak up but even as I have my say, I feel a clutch at my throat and the thought travels through my mind, what will the others say?

What will the others think? Am I speaking out of turn? What gives me the right?

And so I transfer those sibling experiences onto other groups I join. Always the same willingness to get in there and have my say, accompanied by the fear, the shame, the horror that I will get it wrong. Offend. Do damage.

Even as I know there’s not necessarily a wrong, only a stream of voices. Some coincide and others clash.

Perhaps that’s where the vandalism comes from.