On the night of the school dance, my father rested the white board against the bookshelf in order to take photos of my sister in her evening dress.

‘Sit there,’ he told her. ‘Sit straight. Now turn right.’

My sister climbed onto the chair, a high backed wooden chair with a tapestry seat. I sat at the other end of the room, pretending to read my book, Emily of New Moon. I had reached the second volume and Emily was about to fall in love with the boy from across the road. I felt a thrill at the thought that something exciting was about to happen.

‘Hold on. I have to get this right.’ My father put down his camera and took another lens from the table. He had a pile of lenses, all different shapes and sizes. He fitted the longest lens to the front of his camera and then clicked the whole thing into place on the tripod he’d erected in front of him. He stood behind his camera at one end of the room while my sister perched on the edge of my grandfather’s chair at the other end. I could see the strain in her eyes, the fidget of her hands.

‘Turn to face the door,’ my father said. ‘Now squeeze back into the chair and tilt your head.’

I could see the silhouette of my sister’s face, the way her nose turned, hooked like the prow of a ship. We all have this nose, all the girls in my family. My mother reckons it’s a sign of aristocracy, Roman, aquiline like an eagle. But my sister looked anything but aquiline. She looked like she was stuck there on that chair, itching to move on, but stuck like cement.

‘Can’t we finish now? Julian’ll be at the door any minute now.’

‘He can wait,’ my father said. He put down his camera, walked over to my sister and pulled her up towards him. He folded his arms around her, all the way around to adjust the zip that held the dress together. I couldn’t quite see what he was doing; whether he was letting it loose or zipping it to the top but the look on my sister’s face was one of horror. My mother who sat behind her newspaper reading looked up once or twice, but she said nothing.

My sister stood as stiff as the white cardboard backdrop under my father’s administrations, until he pushed her back into the chair, and pulled at the top of her dress to address her cleavage. She had pinned a flower made of tissue paper like material just there at the centre of her dress. I thought she must have put it there to hide the mole in the middle of her breasts, an ugly brown thing that looked like a miniature mountain and sometimes wobbled when she laughed, or otherwise moved up and down with her breathing.

‘You don’t need this,’ my father said as he unpinned the flower. ‘Much better without it.’ All this attention to detail and my sister’s eyes brimmed with tears that refused to spill over and down her cheeks. She clenched her hands together as if to hold back the dam when my father took his place once more behind the camera.

What he saw was nothing like what I saw. I saw my frumpy big sister in a mushroom brown dress, that my auntie had loaned her, a dress that came in tight at the waist to accentuate her middle. It ballooned out into a full flowing skirt and exploded on top into her bosoms, those things my father went to so much trouble to capture.

The doorbell rang and my sister leapt up.

‘Stop. I almost had it,’ my father said.

My sister ignored him and shot off through the door. My father looked surprised as if he was a kid and someone had just taken away his favourite toy. Then he looked around the room. My mother was still hidden behind her newspaper and so I buried my face back inside my book. I pretended I had taken no notice of all that went on before.

‘You,’ he said. ‘Get yourself up here on this chair. ‘I don’t want to waste the light.’

I looked down at my faded blue shorts, my baggy t-shirt. Why take a photo of me? But I did as I was told. The chair was still warm from my sister. I pushed my bum into it and felt its wide arms enclose me. As long as my father stayed back there behind his camera I was safe, but he looked into the lens and up again, frustrated.

I froze as he moved towards me. His hot arms were around my waist as he twisted me into place. He pulled at my t-shirt first this way then that. He stank of cigarettes and of sweat and the tips of his fingers were yellow from the nicotine.

I felt like a parcel wrapped in a hurry, a parcel that would not fit the sheet of paper my father had cut out for me. 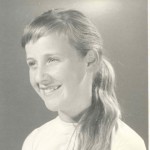 Elbows, head, legs and arms, all the wrong shape, but soon I would be delivered. 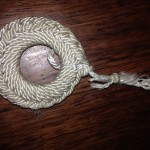