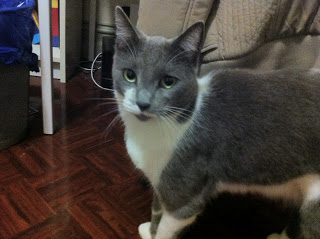 The cat is still missing.  Every morning and in the evenings I go
outside into the back garden and call for him.  I hold fast to the hope that soon he will appear over the
top of the back fence where I have seen him so many times before but so far
there is no sign.
And people tell me stories of cats who have gone missing and
returned unchanged after a number of days, and then there are others, like my
neighbour, who tells me about two of her cats, one who came back with all his claws
missing.  She reckons he must have
been trapped somewhere and had wrenched off his nails trying to escape.

I have visions of torture, the ripping
off of nails.  The other cat, my
neighbour never saw again, but she was convinced that he had been stolen.
‘Your cat is just a huge ball of
grey fur and so beautiful.  It’d be
easy to keep him.’
And so I have
visions of the grey cat locked inside someone else’s house, learning fast to
become an indoor cat and happy enough there.  If this is so, then it is preferable to the idea of him
locked inside some lonely garage or pit or other place of torture, or worse
still dead on the side of the road, to be collected as road kill by council workers and heaved
onto a tip or burned in some mass incinerator.
It is the not knowing that is
hardest of all and then the giving up; the thought that
one day I might stop calling the cat, that I might stop expecting him to return
home.  Then there’s the thought
that he will fade from our memories but never quite go away, not like the cats
who have died in our care, even the one who was killed on the road or the one
whom my husband took to the vet who after a long life at seventeen years needed
to be put down.
Who cares?  a voice inside me says.  It’s only a cat, not a child, not a
person.  Cats matter but how much in the scheme of things?
I do
not want to exaggerate this loss.
It is more the sense that it piggybacks on other losses that until now
had remained more hidden from view.
I find myself remembering the time
when I was eight and my oldest brother left home.  He ran away as the expression goes, though he was eighteen
at the time, and went missing.  He had brawled with my father over dinner.   It was Easter time, I remember,
the time of the crucifixion and of Easter eggs.  These two strangely jarring symbols etched in my memory, the
sweet and the bitter of it all.  My
father had picked on him and my brother threw down his knife and fork and
stormed out of the room.
I did not
see him again for three years. For three years I wondered where he had gone.  And I wondered that my mother
could go about the business of her normal life not knowing the whereabouts of her first born son.
Years later I found that
after sometime my brother had contacted her.
He had become a lay missionary in New Guinea.  He was out in the world and doing good.  My mother must have been relieved.  As I would be relieved were I to hear that our
cat is alive and well out there and maybe even ‘doing good’. 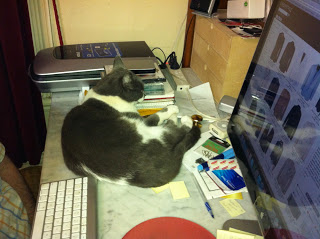