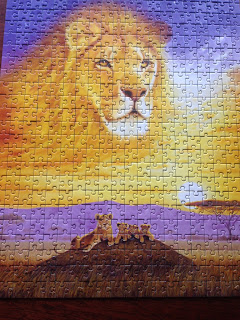 Our visitor from Germany completed the 500-piece jigsaw
puzzle last night and I resented her for it.
She’s a wizard with jigsaws.  The
rest of us are slow.
I’ve tried to make her welcome.  She is welcome but the difficulties of having
another person stay for several months trickles down into unspoken and trivial
resentments, such as who gets to finish the jigsaw.
It’s a tough jigsaw, a lion’s head – the Lion King – floating
in the sky above a thin line of African wilderness with one tree on the horizon
and some lion cubs and mother lion on a hill, against a golden sinking sun and topped
off by a purple star filled night sky at the top.

There are too many pieces that lack intricate detail.  Therefore to complete this jigsaw you rely on
shape.
People approach jigsaws in different ways.  Some go for the internal details and build up
a patchwork within, while others create the frame.
I’m a frame person, which surprises me because it suggests I aim
to get structure into place before I tackle the internal detail, when I have
long considered myself a small detail person who can’t be too fussed about the
bigger picture.
Ever since my mother died I’ve felt the cold.  As if I’ve taken her place.  She who taught me empathy in her
identifications with me when as a small girl I ran around in a t-shirt and shorts
in the middle of winter and she pleaded with me to dress more warmly.
‘It makes me cold to look at you’.
And now I feel cold, even as I battle with our guest over the
temperature of this house.  Even as I prefer to maintain a temperature level that’s
neither too hot, nor too cold, I have this urge to tell her, when she complains
yet again about the cold,
‘Put on a jumper.’
Heating in Australian houses is not as effective as heating
in European houses, she tells us.
Our houses even with proper central heating do not adjust
well to the vagaries of the weather.
I prefer the thermostat to sit around 18 degrees Celsius.  That’s the most energy efficient temperature,
the gasman who maintains our central heating unit told me.
And yet, some unknown person turns it up as high as 23
degrees and I begin to swelter.
I turn it down, and because it’s not my husband who turned it
up and my daughter upstairs essentially leaves the thermostat alone, I can only
assume …
I suspect I do not say anything about this, in part because I
am reluctant to be seen as mean.
That mean old coot, I hear you say.  She’s tight on the temperature.  She doesn’t want to waste fuel.
It’s true, and although others who are concerned about excess
energy consumption might back me, I still feel mean.
I reckon part of the problem has to do with control.  As long as I’m the one who dictates the temperature,
it feels okay for me, even if it’s low.
I can always put it up higher if I decide it’s too cold.
To be the other person, the one who is a guest and has no say
in the temperature other than to remark on its being cold and to hope for the
best, there’s a helplessness about it, and maybe a sense that things feel
colder than they are.
Many years ago, one winter when my husband worked for the commonwealth
government as a public servant, there was a disruption to the heating and cooling
system.
Staff protested, but there was little they could do, other
than to wear warm jumpers and singlets under their suits.
To make a point, my husband wore his dressing gown over his suit.  It was one of those Japanese/smoking jacket
styled dressing gowns in green silk with a black trim.  My husband looked like an emperor.
It’s an idea.  Keep
your coat on or your dressing gown.
Nothing irks me more than folks who like to heat their houses
to tropical temperatures in winter so they can run around in their t-shirts as
if it’s summer.
But that’s what they do in Europe, I’m told.  They wear layers and build them up to go
outside and then peel them off for the great indoors.
It all depends on the location of the thermostat.
Ours is located centrally in the warmest
corner of the house.  It cuts off when it
gets to temperature and leaves the living area that’s south facing and filled
with windows, freezing.
It’s too big a space to try to heat unless you kick the
thermostat up to 25 degrees, which I refuse to do and so our house is much like
the houses of my childhood, where the lounge room in the centre of the house
with its oil heater burning brightly was warm, while the rest of the house was
like ice.
Maybe we need an upgrade of our heating system, to one that’s
more energy efficient, or else we might puddle along as we do now, running from
room to room, depending on the temperature we want for comfort.

At worst, we can crawl under
the blankets in our bedrooms while our house takes shape as a temperature jigsaw puzzle.

One of the cats is limping and I fear she’s hurt herself.  But when we take a closer look at the paw she
protecting, there’s no sign of damage.
I’m slow to visit the vet, given the cat appears to be pain
free, despite her limp which is becoming less pronounced, and at the same time I
think of my shame at not being one of those pet owners who races off to the vet
the moment their beloved animal shows the slightest sign of ill health.
I’m the same with my children – slow to respond – unless they
are obviously ill and in a way that suggests a doctor’s attention is
necessary.
Does it go back to my childhood when a visit to the doctor
was almost unheard of?  My mother used to
go, in my memory in relation to women’s business, mostly to do with the making
of and the aftermath of having babies.
Otherwise, we stayed away from doctors, and my father
attended to broken bones and the like, as when my sister fell out of a
tree.
My sister told me later, how our father had made a makeshift splint on her
leg and left her to a sleepless and pain filled night before he decided this
one was too much for him and she was off to the hospital for a plaster
cast.
In the back of my mind, I have thoughts of visiting both the
doctor and the periodontist and neither thrills me.
The doctor for a pap smear.
That event happens every two years and for me ever since I was 21 years
old or thereabouts when I first entered into a sexual relationship.
Forty years of pap smears, you’d think I’d get used to
it.  The speculum, the cold thrust, the
doctor’s gentle hands.
I only go to
women doctors these days for pap smears but in my early twenties it was only
possible to see male doctors and I tried not to let it bother me.
Until I met my husband, I did not have a regular GP but
followed him into his GP’s surgery to see a Doctor John Pettit, a kind man
who’d have been in his forties when I first met him.
He smoked cigarettes in the surgery, which even then came as
a surprise to me.  I was still smoking,
too, as was my husband, but somehow we were on that initial wave of people who
knew smoking was dangerous and needed to be abandoned if you wanted to live to
a ripe old age.
Even after my husband and I finally managed to stop smoking –
more easily because I’d discovered I was pregnant and no longer craved
cigarettes – though I still dreamed of smoking.
I kept it in my mind that if something bad happened,
something worse than death itself, I could always go back to smoking, and would
not care.
It became my default position, rather like my thought when I
finally finished my work at the Southern Memorial Hospital’s Community Care
Centre as a social worker and moved into part time private practice as a
therapist after I had that first baby, I could always go back to being a social
worker if all else failed.
For years, it was a comfort to me, that thought, both thoughts:
that I could resume social work and take up smoking again if everything else became
impossible.
But it’s never happened, and these days I have no desire to
smoke whatsoever, though sometimes I enjoy the smell of someone else’s
cigarettes, unlike my husband who is one of those serious anti-smokers, despite
his past.
As for social work, I doubt I could get a job as a social
worker any more. I resigned from the social work association about thirty years
ago and no longer feel that way inclined.
It occurs to me, I often have a default position in my head, a
place or a person or a thing to which I can revert, when all else fails.
Once upon a time, it included ex-lovers, the men I’d
rejected, not the ones who rejected me.  And
now I’ve moved beyond that.
No more default positions for me, other than the occasional
fantasy of winning Tattlslotto – not that I ever enter it – or of finding a
publisher for my book.