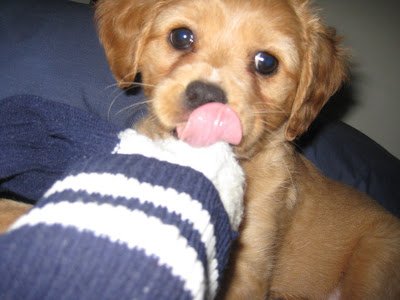 Against their parent’s wishes, our daughters have brought home a dog. At this stage his name is Ralph. Yesterday it was Alfie, short for Alfred. I did not want a dog, I kept telling Millie and Ella because I am fearful that the responsibility for this dog will eventually fall to me and I have enough on my plate.

It’s been going on for weeks now. Bill and I refused to cooperate, so eventually Millie took it upon herself. She used some of the money from Mr Rudd’s stimulus package to invest in this little blighter, who is a cross between a Springer spaniel, a King Charles and a Maltese terrier, I think. He’s only eight weeks old and gorgeous but I don’t think Millie slept well last night. He shared her bedroom.

Already my heart bleeds for Ralph. He cries in the night presumably for his mother and siblings. I do not want to have my heart bleed over any other creatures, but what can I do? He’s here now and as I’ve said before, life will go on. Our three cats so far seem oblivious to Ralph’s presence. Bill is convinced that Anoushka will leave home once she twigs. Who knows? She might adjust. It’s this sort of angsting that I resent. As if we do not already have enough worries. But I’ll get over it.