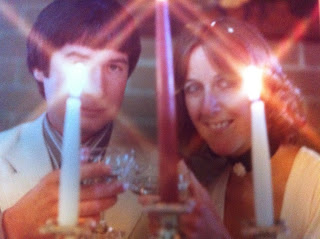 I did not notice the waitress cut up our cake after we had stuck a
knife into it on our wedding day, but I remember going through a dummy run of cutting the cake
before the reception began.  Our wedding cake had two tiers arranged bigger to smaller.
‘This’ll be an interesting shot,’
our photographer said in the lull between wedding and reception.  ‘I’d like to get the
candles’ reflection in your eyes.’
She asked us to hold empty wine glasses up to one another as if by way
of a toast.  Then asked that we
hold the sharp edged cake knife, which she managed to get from the kitchen,
over the dark red fake rose in the centre of the top tier of our cake.

After the wedding we kept the smaller top tier to eat another
day.  It has travelled with us in an old cake tin my husband’s mother gave us after the wedding.
It was she who took responsibility for the cake in the first
place.  She who baked it, and she
who organised a friend and neighbour to ice it, one thick layer of marzipan on
top of which she stretched the ordinary sugary icing.  It was she who chose the single artificial red rose as an
embellishment, she who designed the shape and size.
I look forward one day to opening the lid of the cake to see what lies concealed beneath.   But I cannot imagine doing this yet.  Some have joked that
if we were to open the cake tin, it would signal the end of our marriage, after over thirty years.  Others reckon it might be like an omen.
No one imagines that the cake will be edible, or that it could taste
good.  Though a friend once told
me, a couple of years after their wedding, her mother took their cake, peeled
off the by then yellow icing and recovered it.  They then ate the cake at the christening of their first child – a tradition, I understand –  but given our irreligiosity and our failure to christen any of our
children, we have not been able to take such an opportunity to cut our cake.
I had considered the occasion of
one of the wedding anniversaries, the big ones, maybe the first, the fifth, the
tenth, twentieth, all those multiples of five would be a good time to get out the cake, to cut it up and see what lies beneath but as the years go by I become more
and more reluctant to take a look.
The cake stands, still heavy, sealed in its faded tin.  The paint on the tin is pale red and
yellow, a traditional hunting scene, hounds, horses and men in red
breeches with riding crops, leaping over logs in
pursuit of a fox.  In places the
paint is worn down to a faint silver glow.

About twenty-five years ago my husband sealed
the cake tin with silver masking tape after we’d endured a plague of kitchen moths and
weevils.  I was worried they’d get
inside.

Even then I did not have
the heart to look.  I peeled away
the fat little bug bodies clinging to the underside of the tin and wiped the
whole thing with a damp cloth.
After my husband had sealed it, I sprayed the tin with insect spray.  I’ve not looked at it since.
Today the cake sits in the far topmost corner of the kitchen pantry, a place that’s difficult to reach and each year it waits for some decision to determine its
fate.  I do not want to die without
looking inside but I’m superstitious enough to think I should not look yet.  I fear it might be like the surgeon who cuts open a body only to discover it’s riddled
with cancer – the looking signifies the death knell.
If I outlive my husband then I might look,
but not while the two of us go on together, or at least not yet, not while we
are still in the busy rush of our lives.  It’s too soon to see.

8 thoughts on “Beneath the marzipan”