I’m fighting off a cold, sore throat, sore ear and all the rest, so my husband recommended I take some apple cider vinegar. A cure-all he reckons, rather like ti tree oil on cuts and rashes.

I’m in the countdown to my book launch and determined to stay well enough to get through.

It’s a surreal space in which to sit.

Like giving birth to a baby and just as it is after the birth of a baby, all being well and the baby being healthy, there is a sense of where to from here?

How will this book baby evolve? 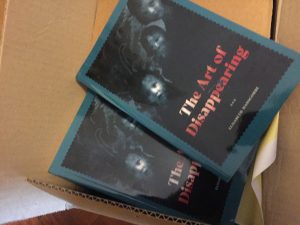 I dreamed last night of my favourite nun back at the convent on a hot summer’s day. She was dressed in full regalia. I was fanning myself and complaining about the heat.

‘It must be ten times worse for you,’ I said to the nun. She looked down into the folds of her black habit and brushed a hand across her forehead, what forehead she could reach under her wimple, and wiped away the sweat.

Then someone came along and offered to interview her in an advertisement for makeup. She needed to take off her nun’s garb for the role and wound up in blouse and skirt seated in front of the cameras. She wore lipstick and was transformed until the Reverend Mother came along.

The nun in civvies had no time even to wipe off the makeup and the reverend mother walked towards her with an archbishop in tow. The two spoke sternly to the nun and after they had gone I asked how it went.

‘That’s a good thing,’ I said, but she looked as though she needed convincing. She could stay with us, I told her but realised she would not enjoy staying at home with my father while he was drinking at night.

‘I’m staying with Charles,’ the nun said. Charles was the father of one of the girls from school who had separated from his wife. He had offered her a room ages ago, and I was surprised but woke to the alarm before I had a chance to discuss it further.

I have a strange sense that coming out with my book is like a coming out in other ways too.

10 thoughts on “Exit the nunnery”