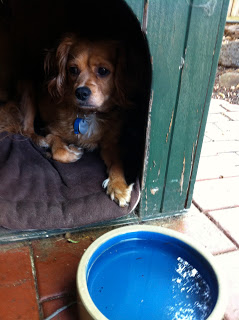 The algae in the dog bowl grows
back as fast as I can clean it out, a dark green velvet on the base of his
otherwise blue bowl.  It has the
appearance of close shaved moss and when stirred up makes the water murky.
I am vigilant about keeping up the
dog’s water supply.  Dogs unlike
cats need a constant and fresh supply. The dog has none of the cats’ ingenuity
in locating water.

33 thoughts on “His plaything”