One day, when I was ten, maybe twelve, my older sister suggested she would teach me to iron.

My sister taught me anyhow, even as I had learned to become a master avoider of most things domestic.

Then for years as an adult, I ironed when my children were young and at school. Every Sunday, listening to my favourite music on the radio or on a CD, I pulled the iron through the pile of school dresses, my husband’s shorts, my own blouses until one day I had had enough.

But not before I enjoyed the image of Tillie Olson who wrote a memorable short story: ‘I stand here ironing, and what you asked me moves tormented back and forth with the iron.’

The story stays with me, the story of a mother overwrought by her child from whom she has become estranged. A mother who wanders back in her thoughts to the time when that daughter was tiny and of how this mother had needed to work and to leave her child in care, and the thoughts of so many mothers of my generation and today who worry that they are  bad mothers.

‘You think because 1am her mother I have a key, or that in some way you could use me as a key?’

Whenever I ironed I could reason to myself I was a good mother. Or good enough.

As if ironing is ever enough. Ironing and housework and getting food onto the table. I have been inadequate in all these dimensions; unlike my older sister who raised her children largely on her own after her husband left her for another woman when her youngest was not yet born and her oldest was a mere twelve or thirteen.

A sorry tale we hear often and my sister has struggled on minimum money with five children to build a world that is rich and filled with people. Her children all grown now and finding their own ways in the world, several with children of their own.

My sister and her children, my own children would not want me to write about the things that have happened to them in their lives that have caused each of them in different ways, grief and shame.

For this reason I stick with my own untidy life, or try to do so.  But it is nearly impossible given my life is punctuated with exchanges with all these wonderful people who frequent my life beyond my family as their stories are their stories.

Still I take comfort from Helen Garner’s words in a recent radio interview with Philip Adams when she says:

‘Who owns the stories anyhow? Stories are not just bits of stuff we pick up on the street and can possess.’

Stories float around outside and are there for everyone.

Writers take things from their observations and experience and try to give them meaning to share with others. And the meaning is subjective in so far as it emerges out of the writer’s eye and mind but it is also universal to the degree that others might resonate with it and others who do not resonate might learn something new from someone’s story that they had never  known before.

And on Sunday, I put on my old clothes and repainted the back gate, which my husband had finally hung after some twenty years of the gate’s waiting in the outside garden in readiness. And the special lock he kept to fit to the gate is now finally in place. 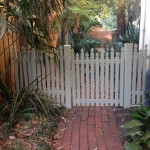 Another of those jobs he never quite got round to doing, though it was there in the back of his mind begging for attention and long missing out until an at home wedding called for action.

And all these pesky little holes in our lives have been patched up until next time.

8 thoughts on “‘I stand here ironing’”