I watched a Youtube clip the other day where the film makers arranged for a young mother breastfeeding a small baby to sit on a park bench in the middle of a busy street somewhere in America.

They filmed her and watched and waited as passers-by saw fit to insult the woman for her disgusting behaviour. Men and women alike.

Even when she responded, ‘I’m just feeding my baby,’ they said she should be doing it in private.

And then, by way of contrast they chose another beautiful and well-endowed model to sit on this same bench with her breasts half exposed. This time although people passed by and many looked – one man even came over and began to chat the woman up – not one of them threw insulting language her way.

The point of the story?

Well they then placed the two women side by side on the same bench and waited. They also propped a male type of minder against a fence nearby and when people stopped to insult the mother feeding her baby, this male minder asked the question:

‘Why is she, the women with the low-cut cleavage okay and she, the breast-feeding mother not?’

So, nakedness in all its many forms can trouble us. It’s not nakedness per se, the nakedness of a new born, of a small child in a bath, though.

It’s the prurient eyes of adults, some adults, including the distorted minds of the paedophiles who can fast shift that naked innocence of childhood into something else, something to be exploited.

And it’s not long after we get into double numbers in age, ten years and over that we begin to feel uncomfortable about being seen naked.

So, nakedness is clearly connected to the sexual.

The weight of exhibitionism, as if like a peeping Tom he draws pleasure out of disturbing his children and his wife by his nakedness.

This then in contrast to the folks who take themselves off to nudist camps.

I suspect the motivation behind nudist camps are many and varied but some of them might well be as seemingly innocent as wanting to go back to nature, so called, of waning to go back to the way things were for us when we were born. Wanting to be free of the pressure of clothing, even though clothing is a great help when it’s freezing cold and you’re in danger of hypothermia and death if you don’t rug up.

And there you have it, a potted history of nakedness, though I left out one essential point here and that is the imbalance between those who are naked and those clothed. And the way this reflects something of our misogynistic world today.

Those men in suits who look on at the naked woman in the garden from that famous painting of Suzanna and the Elders. 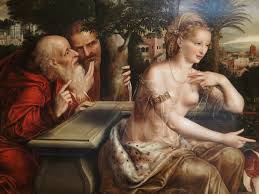 As Hannah Gadsby points out in her famous ‘Nanette’ performance. What was wrong with women in these centuries that they could not do up their blouse buttons and so found themselves with one breast popping out inadvertently?

Even writing this risks censure and titillation, the topic itself so troublesome. Most likely because it brings out the vulnerability in us all.

The Nazis stripped naked the Jews on their way to the gas chambers, for all sorts of complicated reasons, like wanting to get at their valuables, but also, I think to disarm and humiliate them, wanting to render them like cattle on their way to her slaughter.

Nakedness is inevitable for us humans, but it’s also loaded.