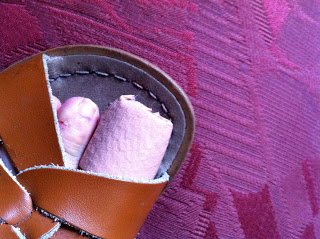 The kitchen was filled with smoke
this morning and I worried someone had left a saucepan under the flame too long
or forgotten to turn it off.
No flames, no saucepan and it was
clear my husband had overcooked his bacon for breakfast.  He had made an early start and was gone
leaving behind the trace of his presence in the congested kitchen air.  It is not an unpleasant smell, only
there’s too much of it.
My husband has taken to making his
own bacon.  He coats great slabs of
belly pork in various spices, sea salt and cracked pepper and then leaves them
to cure in the fridge for days.
After this he smokes the pork in the outside barbeque for hours on a low
heat, so low that the pork does not cook but instead becomes infused with the
smoke from wood shavings he has earlier soaked in water and placed alongside
the pork in the oven.  Then the air
fills with the rich offerings of slowly smoked bacon.  Again it is not unpleasant and this time it does not matter
how much of it there is because the aroma washes away on the breeze.
I trust it does not add to the
world’s pollution, but who knows.
Anything that goes out into the atmosphere must surely contribute to
climate change.  The human impediment.
I feel distinctly human at the
moment.  On Tuesday when I reached
up to take down a box of dress up clothes from the top cupboard I inadvertently
pulled out the shelf with the box.
The box I held firmly in my arms but the shelf came crashing down onto
my toe, my left toe – the toe on the same foot I broke two years ago – and
crushed it.  Not to the point where
it needs no amputation but toes are sensitive.  This one of mine still aches, five days later, though it’s
not so bad now.
I had been looking for a belt that
might fit my grandson and the dress up box filled with cast-offs from my
daughters’ years at school in plays and performances and the like seemed the
obvious place to go.
In other boxes we found plastic
swords, which my grandson brandished with delight. He is into pirates and
knights, interspersed with superheroes.
My youngest daughter who is writing an anthropology essay on the
difference between sex and gender uses his behaviour as a marker, to point out
that although this boy’s parents had worked hard in his earliest years to be as
gender neutral as possible, wrapping him in pink blankets if the mood took them
and refusing all stereotypes, he still loves cars and trucks and trains.  He has very little interest in the
stereotypical girl-type things, dolls and the likes.
Earlier I had dragged out a box of
old Barbies, the toys my daughters once loved, and he took one look at them,
remarked on the fact that we had two identical Ken dolls and that all the
Barbies also looked identical except for the colour of their hair, and then
cast them back into the box.
I wonder whether my response to my
toe was gendered.  By which I mean,
would a man or boy, or someone not of my gender react to the accident as I
did.  I tried not to get hysterical
but I remember calling to my daughter to get me a Panadol of the pain.  I felt I had to do something.
She raced first to the freezer for
ice which she piled on top of a tea towel to cover the wound.   She took over the care of her
nephews and I sat on the couch puzzling over our next move.
My daughter had intended to work on
her essay but because I had promised to take the boys to the swimming pool, and
my older grandson, despite my toe, still pleaded to go, she changed her plans
and came with us so that she could get into the pool with the boys while I sat
at the edge and nursed my toe, clear of the water.
At this stage I could not bear to
cover my toe and although it gradually came to look like a ‘manky mess’, as my
daughter described it, I could not bear to wash it or bandage it until a few
hours later. I needed by then to cover it before I started work.  I could not affront people with the
sight of it.

Only my husband can bear to see
what lies beneath the bandage.
It even makes me squirm, my toe, like this disowned part of me that has
become a purple mess cringe-worthy in the extreme.
Why do I want to show people, those
closest to me?  Is it to get some
sort of sympathy or to have someone else recognise how terrible it must
feel?
I took it to the doctor the day
after the accident and he took a paper clip, spread it apart and heated one end
under a flame.  He used an old
cigarette lighter for the purpose.
‘I
haven’t seen one of those in a long time,’ I said to the doctor.  ‘They’re not as effective as they used
to be,’ he said.  ‘Safety
regulations mean you can never get a hot enough flame’.  For his purposes that is, namely to
sterilize the tip of the paper clip so that he might relieve the tension and
swelling in my toe by drilling a hole in the nail.
Even as I write this it sounds
ghastly, but as the doctor said, ‘It sounds barbaric yet it’s not as bad as it
seems and it won’t hurt, just a prick.’
I didn’t even feel the prick, but I smelt the burnt nail after the
event, an acrid incinerator smell, nothing like my husband’s bacon, and I
noticed the thumping pain subside almost immediately.
My toe is on the mend now but it
will take several weeks the doctor said before it recovers fully and I may well
lose the nail.
Is this to much information? as Jim
might say.  Too much of the blood
and gore variety that people hate to read about because they identify with the
narrator.  I don’t know.  I only know that after the event I
wondered that I could have endured it at all.
And it could have been worse.  Instead it becomes proof of my nine
lives.  Like a cat, I tell myself,
I have enjoyed nine lives and still have a few more to go before I run out of
chances.

27 thoughts on “One squashed toe”