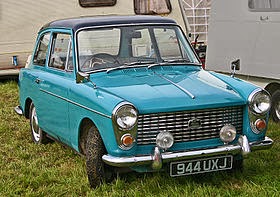 Not long after she was handed her driving license my
mother took out her new second hand car, a pea soup green Farina that was
shaped like a woman, all curves and narrow fenders.

On the Saturdays on which my
mother was rostered to work as a child care officer at Allambie, she drove to
and from her workplace with her four youngest children in tow.   I was ten and the oldest of the
four.

My mother took the car key with her into work and warned
us not to lock the car should we decide to go for a walk or leave for any other
reason.  Otherwise we would not be
able to get back inside the car until her return at five o’clock.  We were not to interrupt her at
work.
Those days were long.  My mother parked her car on Elgar Road not far from the
Wattle Park.  We killed time by
walking to the park and mucking around on the no longer functional tram that
had been installed as part of the children’s play equipment.

Back inside the car in the middle of
the day we ate the jam sandwiches we had brought from home.  We doled them out slowly so as to have
something to do and also to keep our hunger at bay.  We spent the late afternoon dozing and reading books in the
fuggy warmth of my mother’s car.
Nine to five, so many hours to fill for four small children alone in a
green Farina.

On the way home I sat in the front seat.  I helped my mother to drive by
anticipating her need to turn corners.
It must have annoyed her when I insisted on clicking on and off the
indicator light whenever she turned to right or left, but she did not
protest.
My mother was a nervous driver and often stalled at
lights. Worse still, her green Farina had sloppy brakes. We sat at the
top of the hill at the intersection of Mont Albert and Balwyn Roads and waited for the car’s inevitable slow
slide back, even with the hand brake raised.  I hoped the lights might change soon before the car hit anyone
behind us.

In the nick of time my
mother re-engaged the gears and we shot ahead spared the humiliation of a
collision.

My mother had a serious accident within a year of getting
her license, serious as far as her Farina was concerned.  She gave up driving then, too terrified
to get back behind a steering wheel.
With no one to encourage her, my mother lost her opportunity.
She told us years later that she had wanted to learn to
drive again but by then my father was against it.  He was dependent on her company.  ‘If she gets her license,’ he said,  ‘she’ll never stay at home.’  He preferred to act as her driver
instead and so my mother became a kept woman once more.

We’re slipping back into the past in this country with a
conservative government at the helm.
There’s only one woman in the ministry among all those men, all dressed
in dark suits, including the one woman.
We have a new title for our Immigration Department that includes the
words ‘border protection’ – it seems once again we need to protect our
borders.  And now we have no
ministry for science, or for aging, disability or mental health, all those
areas in which vulnerable people need assistance.
We have slipped back into the one dimensional world of white Anglo Saxon, homophobic times and
it terrifies me.  My only hope is
this is cyclical and the slide backwards will not continue.
I wrote a letter to a friend but did not send it.  I did not send it because I did not
want to revive a situation that is now over.  I did not send it in part because I cannot revive a
friendship that is over.

And so my
letter sits in its envelope unopened, sealed forevermore, so many words
unread, so many thoughts unshared.

My letter will go where all the other letters-not-sent go.
There must be many such letters written by people in the
heat of a moment, written with the intention of communicating to another, but
lost through a change of heart.