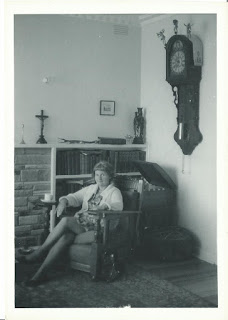 I grew up in a family where secrecy
held pride of place on the mantel piece between the crucifix and the statue of
the blessed virgin Mary.  The
statue was not your typical blue and white plaster cast nor was it simply a
statue of Mary on her own.  It
was cast in a glazed terracotta brown and it included Mary’s baby Jesus and their crowns.
It seemed apt therefore that the
statue stood on the mantelpiece directly above my mother’s head as she sat in
her usual chair alongside the fireplace. My mother was queen of the babies.

My father sat on the other side of
the mantelpiece closer to the crucifix, which fitted him given that the
initials of his first two names matched the JC of Jesus Christ.  Our father
often gave the appearance of a man who was tortured.
My father did not hang spread
eagled on a cross but he exuded suffering, though I did not see it like that
then.  Then in my childhood my
father was not Christ like at all, not the Christ I had learned about at school, the one who was meant to be loving and kind.
My father was a brute.  And in my imagination in those days I
considered it the role of fathers everywhere to dominate and to control.  It was necessary therefore to keep all things
from my father.  It was necessary
to stay safe by staying away.
My father I think now must have
been lonely in his large family with so many children.
So what were the secrets you
ask?  Or was it more an attitude of
secrecy, as if we all had things to hide from one another and so we went about our
daily lives hiding things from each other, especially from our father.
I put some of this compulsion
towards secrecy down to the fact of confession and sin.  I learned early that many things were
sinful.  Thoughts alone were enough
to get you into serious trouble within the heavenly sphere above.
It did not
stop me from having such thoughts but it led me into a pattern of doing and
undoing – commit the sin and then seek forgiveness, the sin of theft being
highest on my list of real sins.
The other sins I made up.  I
admitted to disobedience when I was never so, at least not in my memory.
I admitted to telling lies
once.  Every week the same list of
sins, disobedience once, telling lies once and stealing once.  I did not elaborate on any of these
things.  I had them down pat and
they worked well enough. They fooled the priest.  Once a week off to confession to wash away my sins.
It did not work so well with my
impure thoughts though – thoughts of bodies, desirous thoughts that now in my
imagination I can scarcely remember.
The impure involved games with my
younger sister where we cavorted together on the bed; where we touched each
others bodies the way we saw the grown ups on television touch; where we felt hot with excitement, an
excitement I did not then understand, only I knew it was wrong.
I could not admit to such sins of
impurity to the priest.  I could
not even utter the words and so I resolved these by novenas.  To make a novena you needed to go to
Mass every Friday for nine Fridays in a row and the all sins, mortal and venial, were washed away.
The point of all this talk of sin
is that the sinful nature of my childhood evoked a spirit of secrecy. This
might account for my all too ready tendency these days to say, ‘I’m
sorry.’
To say ‘I’m sorry’ has become a joke in my
household.  It has morphed into the
words, ‘I’m sorry about that’.
A certain tone of voice, a certain
emphasis on some of the words in this short sentence can give the impression,
as my husband says, not of contrition but of an exasperated ‘sorry about that’,
as if I couldn’t care less.
I’ve had enough now.  ‘Sorry about that’, but you’ll just have
to lump it. Sorry about that and now fuck off.
And so ends this morning’s reading
from the bible of my childhood, of which I have written and read many chapters
and now I get to the point as I do in life generally, I’m sorry about
that.
Enough for now.
I shall skulk off to the privacy of
my room and hide my secrets behind closed doors.

32 thoughts on “Sorry about that”