Look at this dog. See how he’s aged. I got a shock the other day when he came back from the clippers with a summer coat. To see how thin he was underneath his thick winter overcoat of the past several months.

The other day, I took both dogs out for their morning walk down the road to Fritz Holzer park, which my family prefers to call the Rose Street tip, this park of reclaimed land that forms a swamp and was once used as a tip for the cast-offs from Hawthorn and surrounds.

Over the years, I’ve watched the park turn into a green oasis in the middle of our suburb one that now attracts visitors and dog walkers in their droves, given the constraints of life under Covid.

When my girls were young, we used to cut through this park on Friday nights on our way to dinner nearby at a Thai place and on our way home in the evening twilight we took to counting the bats that flew through the sky.

The bats were such a novelty but soon they became a nuisance and people resented them for the way they stripped the fruit trees and buds, looking for food and they all but destroyed fern gully in our city’s Botanical Gardens.

Our governments soon introduced policies to deter the bats and drive them off course away from the Botanical Gardens a well-manicured museum of plants, to the edges of the Yarra River where the gum trees and willows could better cope with the burgeoning colonies of bats. And as far as I know they’re still there.

When the dog first came into our lives, I was resistant. I did not want this dog. I did not want the additional pressure of another vulnerable creature in my house, a creature whom I would undoubtedly need to take some responsibility for. I had forgotten the pleasure that animals can bring even in an over full household.

It’s taken over a decide to adjust to life with this dog and two years ago another dog to turn me around. I’m not an official dog person, one who cares about dogs, about breeds about their antics, their personalities and the struggles dogs endure with us humans as their carers. It took some work for our daughters to persuade us to take one on. I’ll try to attach a pdf to prove the point.

I’ve written before about our back garden which when our children were young became a grave yard for dead rabbits, birds, frogs, ad guinea pigs. We still have gravestone plaques dedicated to one cat, Tillie and to another cat Pickles. To the mice Frida and Alexandra.

The naming of pets, the chance to go through a lifetime with a creature is good preparation for the fact of death. But it’s never the same when a person goes. At least not for me.

I was going somewhere with this story when I talked of the other day, but every other day that lies behind me merges into another, even more so these days under the weight of lockdown, I wish I was able to delineate one moment from the next and create a clear storyline that goes up and down, creates that narrative arc so beloved by story tellers that has people on the edge of their seats only to come down the hill slowly at the other end through a satisfying epiphany and sense that something’s changed.

It’s not so easy when things can seem so much the same and yet they’re in constant flux.

I realised this when I turned forty and looked back on my life as if I’d only just realised I was in one.

Now twenty years plus later, I look back and see things more clearly and yet my memory is not what it was when I first reflected on the meanderings of my childhood. Once I took to writing down my memories, they changed in shape. They lost their intensity. It’s as if a memory when first encountered shines with brilliance but then on revisiting again and again it loses its lustre and potency. And yet more and more I sense the bodily flash of the newness of things when I was small, in a smell, or a photo or a flash of colour on a walk.

And the look of the dog now. His visible rib cage, his sharp shoulder blades where his upper leg meets his hunches are a reminder of death. The skin and bones of our humanity that is lush and full at birth only to fade as we age.

I’m working on an essay on women, life writing and ageing. In it, I compare my mother’s autobiography with my memoir.

I have the advantage: I’m still alive.

It puts me in mind of a time when I was in my mid twenties and first starting out in the world as a social worker, full of enthusiasm about how helpful I could be to other people.

At this time in my life I had left home, broken off from my first gambler boyfriend and was living the life of a free woman, however difficult it might have been by night when I felt so alone and looked for the solace of male company.

By day, I worked in my chosen career and held firm to the belief that I could be helpful to other people, primarily through listening and trying to understand them and to help them make sense of themselves.

‘I’d never go to see someone as young as you,’ my mother said to me one day. She had just taken up a position working as what she called a ‘social worker’ in a voluntary and largely untrained position.

She worked with the Catholic Family Welfare Bureau in East Melbourne under the supervision of one of my old supervisors from the university and took on the role of visiting people, more often than not people who were struggling to survive in the housing commission flats in Fitzroy, people whom my mother said were much worse off than her.

My mother made home visits and helped people to manage their limited resources and traumatic histories, by offering practical help as well as a listening ear.

I took little interest in my mother’s work at this time, full to the brim with keeping myself alive, but her comment stung.

I’d never be able to catch up with her I knew. I’d never be as old as her. I’d always be thirty-three years behind.

Nor would I ever be able to have as many children as she had, even as I had wanted to have at least nine children when I was little. Just like my mother.

I had my mother’s name and more often than not she had told me, ‘You’re just like me.’

These words had the effect of leaving me uncertain of my place in the scheme of things.

When I was younger on the cusp of adolescence, my indignation swelled whenever any of my brothers spoke rudely about our mother. 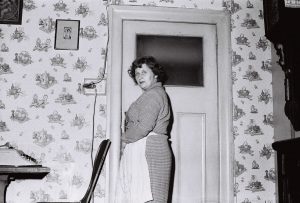 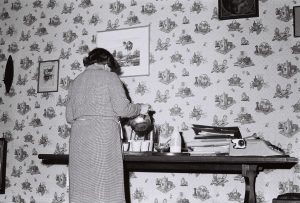 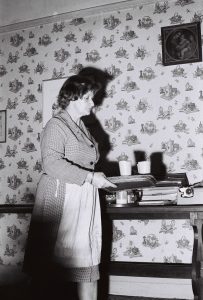 My mind did cartwheels as I tried to divert back to the notion of my lovely mother. How was it possible that anyone could see her as anything but wonderful? Look how hard she tried to protect us from our father. See how much she suffered without complaint.

My father called our mother the stupidest woman in the world, the stupidest and most useless piece of human flesh that ever walked. But by then I realised, despite my mother’s insistence he was ill, that my father was drunk.

And drunk people were unreliable.

Drunk people could not be trusted.

Drunk people said things they did not mean.

Drunk people spoke out of a strange and crazy place where their words slurred and took on the fury of rage, unless they were jolly drunks like in the movies and my father was never that.

I needed to defend my mother against all criticism and to do so I likened her to the Blessed Virgin Mary, even though I knew she was not a virgin, given all the babies she had brought into the world.

I also knew that, although my father told her often enough, she was a no good whore, I knew this could not be true.

I took one look at my mother, frumpish and tired, as proof. Whores, prostitutes, even the poor ones wore elegant clothes and tried to look alluring.

My mother in her apron bent over the stove cooking my father’s steak in butter the Dutch way and turning away from time to time to read her newspaper, forgot the potatoes on the boil and burned them.

The place reeked of the tell tale stink of burnt vegetables even after she had poured off the water, scraped off the top layer of seemingly untouched potatoes and left the black burnt pot to soak in water.

The taste lingered. The potatoes were inedible even as they looked the part, fluffy and light after she had mashed then to death.

My mother could not mash out the taste and was upset when we protested. ‘You can’t taste it,’ she said as if we had no taste buds of our own, as when she told us the baked rabbit was chicken and my brothers held up the bones of the rabbit to the light and fossicked around for the non existent wish bone.

I see now my mother was trying to encourage us to make light of things.

Her mantra: ‘Do as if nothing is wrong’.

She tried to cast things in a good light, as in the cliché, ‘all her geese were swans’.

I did not see it then. To me then, all my mother’s birds flew in great concentric circles over head, their wing spans blocking out the sun, and not only did they soar, they were beautiful birds who sang the sweetest songs like nightingales when they settled and made the world a better place.

Just as my mother did on her visits to the housing commission flats. I could never hope to do as good a job as she.

But now when I am a decade older than my mother was when she pronounced me too young, I can compare our stories, not the actual stories, which are incomparable, but the words on the page.

I can interrogate her text in the way of an academic and can see such flaws in my mother’s perspective, as in her way of closing things down, and telling the reader what to think.

‘And that was that,’ is my mother’s preferred way of ending chapters, as if we readers must not enquire further.

And she likes to leave things ‘in God’s hands’, again perhaps as a means of taking away any agency.

Invariably my mother leaves out the shadow side, and hints only at the dark truths of her life, in order perhaps to give her reader an impression of such beauty and kindness, she is like a bird that soars.

As for my own memoir, which comes out in a couple of months, I can offer no such interrogation, as I am too close to this book.

But at least now, I am ahead of my mother.

She cannot answer me back and I will have the last say, if only on these pages, as hopefully my children will have something more to say about me and my writing, once I am gone.

That is, if they can be bothered.