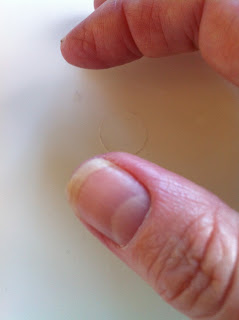 The other night as I sat at my
computer struggling to write a short story that held none of the promise of my
dreams, a small army of ants rushed up to my key board and spread out across my
desk.
And do you know, I squashed them
all with my thumb, every one of them squashed flat under my thumb.  I did it out of instinct and in a
hurry, intent on making sure that not one single ant survived because by now I
had decided these were the scout ants, the ones who go out in advance of the
troops to survey the land for food and I did not want any other ants to invade
my desk.

I could not find a local ant to photograph and so I offer an image of my weapon of destruction.
Only now do I consider the
heartlessness of my actions, but when it comes to ants I can be ruthless and
why is this so?
If it were a spider or a beetle, I would have used a tissue
and collected the creature, and put it out the door.  But not so the ants.
Mind you, I’m not sure how I’d have
handled an avalanche of spiders. I might well have run from the room.  I’m not scared of spiders as a rule but
a group of ten of them advancing from behind my computer screen would be worse
than any of the unexpected and negative events that happen in my dreams.
This puts me in mind of the asylum
seeker debate here in Australia which preoccupies me at the moment. I suspect
there are folks who regard refugees rather in the same way as I considered
those ants, with fear and loathing, mostly because they are seen as enemy
aliens to be gotten rid of or avoided.
The asylum seeker issue is copping
a battering in Australia at the moment because the government has been trying
to pass legislation that will allow so-called off shore processing, say in
places like Malaysia, as a way of preventing people smugglers from taking the
refugees’ money and shipping them out to Australia in leaky boats, two of which
have recently capsized and sunk with the loss of many lives.  And also of stopping the uninvited influx of refugees from invading our shores.  What an irony when you consider what happened to our indigenous people a couple of centuries ago.
I know it is a political issue, and
a complex one, and that many people have different perspectives so I can only
speak for myself.  I can understand
why many are reluctant to make room for these strangers.  I know that I too often prefer the
cosiness of the in-group, especially when I’m included in it, but if we lock
people out, desperate people who have nowhere else to go, out of fear or greed
or sheer ignorance then what sort of world are we creating for our young ones?
I sound like a cliché and must get
off this topic.  I hate to
preach.  For days I’ve been
following this argument on Jennifer Wilson’s blog, No place for sheep, and I’m
stunned at the vitriol that gets poured into the debate now being waged among
seemingly intelligent and thoughtful folk.
Some actually abuse one another
online.  Moron, dick head, idiot
etc.  These words when spoken don’t
trouble me one bit, but when I read them online I get a shock when they are
directed at one another in the course of an argument.   In written form they hold more weight.  And not all the people arguing are men,
I understand, perhaps more prone to flaming.  There are some women – or people who identify themselves so
– who use this language.
I say this because I’m still
thinking of Plastic Mancunian’s post about the differences between men and
women, how men when faced with an issue want to solve it and women more or less
want to talk it over, talk it through, get some empathy rather than have the
problem solved in an instant.
That’s my take on the issue related
to asylum seekers.  We need to
think about it more, but there seems to be this push to take action.  Granted it’s been going on for years
now and there’s a fear and expectation that many more people will die on those
leaky boats, but what other choice do they have?  Their lives are desperate and coming here even if it kills
them seems to be their only hope. I can understand that.
And now I think of my ants.  I killed them effortlessly and can
rationalise that ants are not sentient beings.  They will not have suffered on their quick exit, but we are
hopefully more likely to identify with human beings who need our help now
however different from us they might seem to be.
Most of us know what it’s like at
times to feel desperate, but there are degrees.   And for a heart stopping take on this, especially from paragraph four down, I send you back
to Jennifer Wilson’s latest post on quiet desperation.  Some of you will understand this
well.