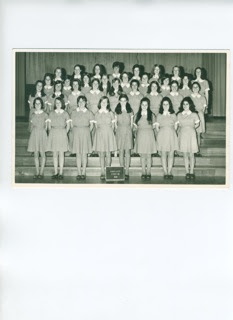 When I was a girl, my younger sister was a rebel. The third one of us girls to go to our convent school and following in the footsteps of two older goodie-two-shoes sisters, she might have thought it the only way to assert herself.

Every Friday afternoon the head nun wrote a list of Marks beside the names of certain girls on the main blackboard outside the concert hall. Marks gained, black marks given, against a girl’s name for things like application – when you failed to hand in homework; punctuality – if you were late for class; order – if you were messy in your work or dress; and finally, deportment – for rudeness. Deportment was the big no-no.

At the beginning of each week, each girl was given an imaginary shield. A shield consisted of ten points. The idea was to keep your shield for as long as possible. It was rather like the demerit system of points against a driver who breaks the road rules.

Here in Melbourne we can only lose ten points, I think, before we lose our driving licence, three points for speeding, three for driving while using a mobile phone, a certain number for not wearing a seat belt and so on.

At my school we lost one point each for punctuality, application or order, but five points for deportment. In my year nine class one girl once swore at a teacher and she lost her shield instantly. Double marks for deportment.

This particular year, the year my sister was in year nine, she and a girlfriend changed the wording on the black board from ‘Marks’ to ‘Remarks’.

Not such a heinous act I’d say. Even at the time, even in my most self righteous do-gooding days, I did not think it such a terrible crime, but the nuns did, at least the head nun did and once my sister and her friend were discovered as the culprits – you could not hide much in our small school – they were publicly shamed.

They lost their shields, double deportment plus the points they had already accrued for application and order.

This brings me to today.

These are the last days of my youngest daughter’s education. In Melbourne, we have a ritual called ‘muck up day’, the final day of school, a rite of passage.

Most schools celebrate in this way. The school leavers love it, the teachers shudder. A day when the year twelves, the school leavers run riot across the school. They throw flour, water bombs and put up banners, streamers, balloons. A celebration. They dress up and occasionally harass the younger students, but there are strict limits around such activities.

Schools tend to come down heavily on students who deface buildings, damage property or hurt people. Egg throwing at innocent passers-by in the streets before or after school is discouraged, though it still happens.

At my daughter’s school the girls are told to leave their blazers at home during the final week as a protection against excess laundry bills. The egg throwers are generally thought to be from other schools, not ours, no never. You see signs of smashed eggs on the footpaths and against buildings from time to time during this tumultuous time.

Muck up is the ritual that stands between the completion of their final school year and their exams which are yet to come, and between their so-called freedom after thirteen or fourteen years of school before they enter the next phase.

At my daughter’s school the teachers are fairly vigilant. They clamp down on any activity other than tame projects like dressing up, with threats that if the girls muck up badly they won’t be able to sit their exams at school. They will have to sit them at the dreaded Show Grounds.

Our girls dressed up for a Harry Potter day and divided the entire school into houses and then gave the younger students lollies. In my daughter’s view they were gentle but there have been years, one I remember from an older daughter’s time, when each student walking in at the gate was told to hand over one of her shoes.

You can imagine by mid morning the pile of shoes, hundreds of identical shoes, except for size and condition, in the middle of the quadrangle. The hours spent retrieving individual shoes, many of them unnamed. But it was essentially harmless.

This year at Presentation night the week before last, the principle gave a talk on advances in technology, among other things. She told us about social networking and about the way the world has changed for our children. How different it is today and how it will continue to change in unprecedented ways.

She put up a youtube clip entitled ‘Shift happens’. You may have heard of it. A fascinating journey through societal and technological progress over recent years. Our principle had adapted the clip to reflect her concerns

At the words ‘shift happens’ the audience tittered. The principle seemed to give no sign of recognition. Needless to say, ‘shift happens’ is a play on the expression, ‘shit happens’.

This was on the Thursday night. The day before, two girls, allegedly on their own account, had spread yoghurt and sticky stuff around the toilets.

The ‘shit hit the fan’ and the year twelves were told their final year activities could not go ahead. In the end the principle modified her threat to a warning of behave or else…

On the morning of that final day, sometime over the weekend, though it might have happened on the Monday morning itself, someone, some unknown person or persons wrote the words ‘shit happens’ in bold graffiti paint on the windows of the concert hall. The words were as high as a person.

No one discovered the sign until the whole school was due to assemble for the year twelves’ final presentation to the entire school, which traditionally is a comedy presentation for the benefit of all year levels and is followed at 11.30 am by the Leavers Service where year twelves are each offered a testimonial and parents are also invited.

The principle when she discovered the graffiti hit the roof and threatened to cancel the morning. The girls were hysterical and rang their parents.

Staff managed to clean the windows, ‘with strong chemicals’, the principle said, though my husband reckons they probably only needed Windex. In any case, no damage was done except that of wounded pride, chiefly the principle’s pride. She saw the graffiti as a personal attack.

The point of this long ramble is the degree to which a few words out of place, my sister’s ‘remarks’ all those years ago, certain unknown persons’ message that ‘shit happens’ can give rise to hysteria that borders on the stuff of wars.

Why are we so sensitive to the written word. And really, over fifty years, has that much changed?