Since my mother died I have started to feel the cold in ways I never did before. As if her presence kept my body a couple of degrees warmer and her absence becomes a cold chill through my bones.

I knew even before she went, her death would leave me older, at least by the feel of it.

Today I’m on the edge of a cold, the sort that makes your nose itch, your eyes water and your throat burn. But it’s not so bad I tell myself, not bad enough to opt out.

And I’m hungry too. A good sign they say: feed a cold starve a fever.

You know you’re sick when your hunger goes, when you no longer salivate at the thought of something tasty.

My mother stopped eating three weeks before she died. In hindsight, we should have seen it as a sign. She was pulling out but we kept trying to keep her going.

Thrush collected in white globules at the corners of her mouth and she poked her tongue in and out in an effort to get rid of it.

In time the hospital staff treated the thrush but it kept on coming back. Then someone came up with the idea of feeding our mother cranberry juice, the concentrated kind, to give her relief.

My sister bought a good-sized bottle from the chemist and we encouraged my mother to drink it by the cap full.

She gagged. She turned away, and the white flecks in her mouth turned pink.

Every day they brought her lunch.

‘Coax her to eat. Anything at all. Try the chocolate mouse,’ my sister said and shoved a heaped spoon close to my mother’s nose so she could get a smell. ‘You love your sweets.’

But even the chocolate pudding stayed in its plastic hospital sized tub, uneaten.

And so it was, my mother gave up eating and with it the will to live.

I had not bargained on this way of going. If only I’d known.

Thirty three years earlier when my first daughter came into the world, I had no idea about how to feed her either.

I had every intention of breastfeeding before her birth but it never occurred to me it took skill or practice or some other unforeseen capacities on the part of mother and baby to make it happen.

My first daughter’s labour was long and in the end I needed yet another dose of pethidine to get me through, but this time too close to delivery. I had lost the will and capacity to push so the doctor set me up in stirrups and dragged my baby out with forceps.

Exhausted and in pain and drugged out on pethidine, this was not the birth I had anticipated.

My first daughter was born at lunchtime, and by clock work the staff wheeled in a lunch tray, chicken of some sort, and my husband also exhausted but still awake enough to be hungry, ate my lunch while I drifted off into a deep sleep all afternoon.

When I woke at 6 o’clock in the evening I asked to see my baby.

Thirty three years ago babies were taken from their mothers and wheeled off into communal nurseries where the nursing staff kept a close eye over all their charges.

Visitors could come during visiting time and walk along a glass walled corridor where they put up a sign with the baby’s name or family name against the glass. One of the nurses on duty then picked up the baby whose name had appeared and lifted her for all to see.

During those long seven days of confinement visitors were not to touch, any more than were fathers or anyone else other than staff and mothers.

When the baby cried out in hunger, a nurse took each one to each mother for as long as was necessary for a feed and nappy change.

At some point around day three, one of the nurses took each mother into the nursery to teach her the art of bathing her baby and to reinforce the rules of nappy changing.

Thirty years ago before the advent of disposable nappies we tried to find ways of folding the nappy corners and tucking them inside so as to preclude the use of safety pins.

Safety pins, despite their name, were not safe.

I tried to keep up this tradition of pin less nappies after I took my daughter home but failed. The nappies leaked and for all that I had bought the best pilchers on the market – those strange plastic lined over pants – to cover the nappy but like cranberry juice as an antidote for my mother’s thrush, such nappies could not prevent any seepage between changes.

Still, the trick most foreign came with that first attempt to feed when the nurse first brought out my baby and suggested I try.

I gave up my dignity to oblige as the nurse grabbed a hunk of my breast to one side and forced the nipple into my baby’s mouth.

We were lucky. After two or three such attempts my baby latched on and began to suck and so began my life as a breast feeding mother.

Nothing glorious or beautiful at first and in those days with strict instructions to let the baby suckle for only one minute at a time and then change sides so as to give the nipples a chance to harden, I was anxious to get it right.

The regulation of breast feeds reminded me of the rules about sunbathing: spend only ten minutes in the sun on day one, turning yourself slowly, as though you were basting a chook, and then the next day increase your time in the sun by another ten minutes and so on, day after day, ten minutes at a time until on day six you could endure a whole hour in the sun without burning and your body turned a glorious golden brown without a hint of burning.

No need for sun screen or any such thing in those days and if you really fancied a glowing tan you might use coconut oil for that extra baste.

If only we knew then what we know now.

And so it was when my baby was born.

With my second and subsequent babies I no longer needed a nurse to grab a hunk of my breast and force that nipple into my baby’s mouth and with the benefit of hindsight, I would have done it differently with my first, too.

With the benefit of hindsight I also would have stopped forcing that spoon of chocolate mousse into my mother’s thrush filled mouth.

Wth hindsight, I would have more respect for the beginnings and end of life. 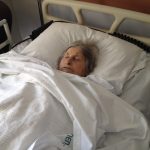 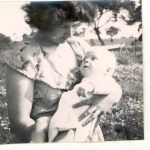 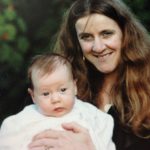