As much as I want badly to write till my mind is empty of thoughts I have so little time these days.

I need to set the alarm earlier but then there is the conflict between my wish to sleep longer and my need to write and always the hope that one day soon all of this will be over.

My husband will be out of hospital and all will be well.

But is it ever well? Or are we always at the mercy of death’s waggling finger hovering there above us, a threat to our lives from the moment of birth.

And yet in order to live we need to be able to hide away from this insult for long enough to get on with our lives whatever that means. And maddeningly to live as though there is no tomorrow.

To live one day at a time, from moment to moment with out too much preoccupation with the past nor too much forward planning.

For me, this one day at a time, the Alcoholics Anonymous mantra, which my mother loved and I so hated as a child is one I must try to adopt today.

Otherwise, to pitch myself into the future and risk despair.

My days are punctuated by visits to the hospital such that I now know my way through most of its corridors.

Cabrini hospital is designed in a way that confuses the occasional visitor, which might be one of the reasons the designers have sectioned it into areas ABCDEF. But my mind is such I cannot operate in this way.

This is not a map I can follow. I prefer to use the wall hangings and the pictures on the hospital walls of staff taken over the years, the smiling faces of happy patients young and old engaged with caregivers from all arenas, not only doctors and nurses but radiographers and cleaners and all those who apparently work as a team at the hospital.

Everywhere you encounter people in similar uniforms, but each shirt signifies a different area of endeavour.

It reminds me of the days when I worked at Prince Henry’s hospital in St Kilda Road where the cleaners were referred to as ‘pinkies’ because of their pink uniforms.

They were then mainly women. These days the cleaners remain mainly women for the actual cleaning tasks but there are equal numbers of men engaged in the other more menial functions of hospital life.

In my time, at Prince Henry’s, the nurses wore unfirms of blue and white, though red jumpers and cardigans had come in and they were beginning to wear trousers as well, a uniform navy.

So I have figured the nurses in Cabrini, the lower ranking nurses wear a red blouse while the senior nurses wear white. Some professions like the pharmacists and physios have their profession descriptor emblazoned on their shirts.

One thing that remains the same from my days at Prince Henry’s, the doctors have no uniform and dress seemingly as they please.

When I was at Prince Henry’s the doctors wore white coats over their every day clothes.

These days, doctors don’t bother, all except my husband’s cardiologist, a man who is of his time.

A kind and competent physician and talking to him is a strange experience because when he comes to visit he wears his white coat and he sits down to talk. His bedside manner is inclusive and respectful, so different from some of the younger doctors whose bedside manner leaves much to be desired.

It’s the disempowerment that gets to me.

The fact that my husband cannot know from one day to the next what will be happening to his treatment.

Some ascribe it to the fluctuating levels of the new antibiotic they administer. A nurse explained it to me thus:

There are two forms of antibiotic, one is stable, the other not. If you give the stable form you can, I presume, rest assured the body will react as intended but the unstable form creates problems in that it needs close monitoring.

They try to calibrate the Vancomycin in my husband’s system, too much gives him high readings, which is toxic and so they take himoff infusions for a day, conduct another blood test to check his levels and then give another infusion or two then again check his blood levels. Apparently too much of this antibiotic in your system is dangerous and can affect your kidneys or liver but not enough and you might as well not administer it at all.

So we are between the proverbial rock and hard place.

I notice this more and more in medicine.

This need to calibrate doses, the fact that one size does not fit all. It makes sense.

Human bodies are not identical, but it would help if my husband was kept as informed as the doctors about some of these markers.

The other night a nurse told him the levels for Vancomycin were at 27 when they needed to be between 23 and 25, hence stopping the infusion last night.

When I go to see him this morning I have no idea whether he will be infused or left with an oral antibiotic or no antibiotic at all.

Last night he rested on top of his bed, filled with the despair of this not knowing. He feels well in himself though still very tired but he must stay in his hospital bed until they can get these dosages stable.

It’s the fault of his body. And no one else’s, but fault is the wrong word.

And in the process of institutionalisation hen risks losing the ability to assert himself.

They other day I asked, if he could go home over night.

They have let him home by day between infusions and blood tests, why not at night?

It paid off this asking. The nurse rang the doctor in charge and yes, my husband could go as long as he was back by 6.30 am.

And so for the first time in just under five weeks, my husband slept in his own bed. 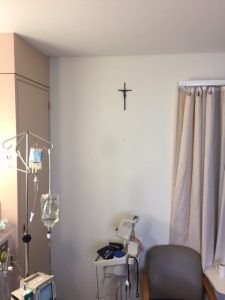