My husband is preparing cassoulet in readiness for a dinner tonight in honour of his birthday which falls tomorrow.

Cassoulet, in the grand French tradition, duck leg confit prepared over a week ago which he has cryo-vacced in separate bags and stored away in readiness for inclusion in the stew he’s concocting at present, including a ham hock, pig’s trotter, pork shoulder, Toulouse sausages bought from a French delicatessen in Carlton and various other meats that he needs to brown first before adding them to a giant pot in which he will also cook a truck load of white beans, which he’s had soaking in water over night. 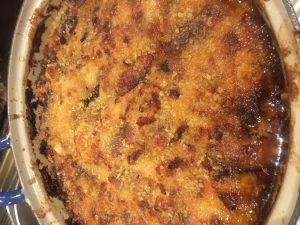 When we were planning this event and I suggested given it was his birthday wouldn’t it be better if he were to tackle something simple or we bought food in from elsewhere or even that someone else might cook, he refused.

‘I can cook it days in advance so it it’ll be ready to go on my birthday.’ For some reason although we had discussed this with our various children and their partners and decided as a group that it would be better to celebrate the event on the Saturday night before, the eve of his birthday, he took it into his head that we were eating the cassoulet on the Sunday.

He thought therefore he had a day’s grace but as we talked about logistics last night the penny dropped and so he was up early this morning ready to go.

The house smells like a French restaurant, dense with the whiff of fried garlic and browned pork. It clashes with the taste of my breakfast yoghurt but still it’s a good smell.

A fantastic smell, especially when the weather is still spring chilly and we all have bigger appetites when it’s cold.

My children grew up with such smells. All their lives their father has cooked like this. One of his favourite pastimes to cook excellent food, but also one of the things that exasperates him the most when things don’t work out quite as he’d have wanted. as happens.

I act as sous chef.

All my life the sous chef, the under cook, the one who fetches and carries, the one who clears up, the one who keeps the plates on the table, the glasses filled, tempers calm. It’s a role I’m used to, given my years as a woman born before the second wave of feminism. Though in the 1970s when I first took myself off to Women’s Studies at the university I began to question my long-held belief that it was a fine thing for me to win my boyfriend’s love by ironing his shorts, by cleaning the toilet and scrubbing out the shower recess.

My job as helpmate.

It came as a bolt from on high when I first began to understand there was such a thing as inequality between the sexes, that women’s lot was more lowly than that of men.

The third wave of feminism, if there is such a thing, has set me further on edge. Ready to declare war on any helpless male who assumes I’m available for taking on the menial tasks of life and yet it comes so effortlessly these impulses to help out, to make people comfortable, or at least try.

I rationalise the impulse back to childhood when my mother taught us, or at least it’s in my mind that when you want something yourself, a cup of tea, a piece of bread, a piece of fruit you must offer all those in your company the same first. You cannot simply go and help yourself without first making sure that others are happy. It’s probably not a bad habit, but it can grate when not everyone expects to be included in my own decisions about what I might want to eat or drink. It can become a type of millstone.

The list of requests go on too long and people tire of such solicitude.

My husband tires of it, especially when directed towards others, but heaven help me if I forget to pull back his side of the bed at night after I pull back my own. An odd habit I picked up in Bali where we stayed one overly long week, years ago, and the people who serviced our holiday suites came in every evening to pull back the sheets and drag around the mosquito netting.

How easy it became for me to take up the role of servant at home. As I prepare my side of the bed for sleep I must prepare my husband’s, even when I spend much of the night elsewhere in a spare bedroom to escape his snoring, which starts up around one am and which I cannot tolerate for more than two minutes before I’m wide awake and in search of quieter quarters?

Lynn Freed writes of snoring as one of a man’s greatest humiliations. Snoring stories are the great stories of revenge, Freed argues. The way in which at dinner parties, women, and it is usually women, tell stories about the nature of their husband’s snoring.

Women can keep their fellow dinner guests in stitches as they regale them with the horrors of those late-night trumpet calls, while the husband, the perpetrator of said snores is left humiliated and in shame.  Notwithstanding the fact he commands a respectful figure by day. She imagines him decked out in business suit and tie by day, but there he is at night, slack jawed, mouth agape emitting the most hideous of noises fully unconscious of the fact until his partner jabs him in the ribs and urges him to roll over.

I did this for years.

‘The double bed has a lot to answer for’, says Germaine Greer in one of recent talks On Consent.

I went on Thursday evening with a few friends. We arrived early to get best seats. My friends are also keen on being able to see and hear clearly. There we were at the edge of the reserved section, which proved to be reserved for dignitaries of sorts. We sat beside two women from Melbourne University Publishing who distribute Germaine Greer’s books.

It was fun to chat with them beforehand. I had forgotten my notebook and during Greer’s talk, I wrote on a scrap of paper, my scanned ticket and just as I was running out of space, one of the women handed me over her ticket and then another as I ran out of space on each sheet.

The woman beside me told me later she noticed that I looked as though I was getting anxious in running out of space and so she felt compelled to find me more paper. A kind and womanly thing to do and I was grateful.

There were two men alongside these two women whom I could not see only I noticed at one point during proceedings perhaps at the point where Lesley Cannold, the interviewer came on stage to begin her conversation with Germaine Greer, after the great woman had talked to us for some forty or so minutes off the top of her head.

I’m afraid I too fell for Germaine Greer, her mind, her wit, her way with words, even as there were moments when I considered she had failed in the art of throwing in qualifiers. Too certain were her generalities.

The man nearby sounded furious with her for the suggestion that all men were… of course all men aren’t any more than all women are…But Greer makes the point and she’s on about the patriarchy and problems with notions of consent.

As if consent was easy. Yes, please no thanks. I’ve changed my mind. As if consent can be factored in during the middle of sex. When you started out in one frame of mind, enjoying the encounter, your mind in top gear and filled with desire only to change your mind when as Greer suggested, your partner turns into a Christian Grey type with his bag of tricks and you decide you’d like to stop now. Too late.

Greer gave another example of a woman friend and colleague who lived with her young daughter and had broken off with her partner. He arrived one evening demanding sex and she told him to leave, but he forced himself onto her and she failed to protest, believing it was better she acquiesce rather than scream or try to stop him, because she did not want to upset her daughter sleeping upstairs.

And in the morning, this man with whom she also worked came into work crowing because he had succeeded in inveigling his way into her body once more and was able to prove himself triumphant.

Leslie Cannold suggested it was, but how to prove it in a court of law. And then I found myself thinking of all those Saturdays when I was a child and my father was at home and drunk, when he called out to my mother to join him in bed. And she held back engrossed in her book, and close to us as we played in the loungeroom or watched television and we seemed to do often in those days.

On this day there was no noise from the television just the click of chess pieces on the board as my two older brothers competed with one another in one corner of the room and my younger sister and I played dress ups with our dolls.

The others must have been around somewhere, my older sister, my oldest brothers, my littlest sister and brother, but in my memory,  it was just we four there in the lounge with our mother as our father called out to her repeatedly from the bedroom,

In time, she set aside her newspaper and dragged herself up from her chair.

And then I listened and sensed my brothers and sister listening too, for small sounds, those that might suggest our mother was in trouble, our mother needed help.

When the cry rose up through the walls and into the hall way, we ran to our parents’ bedroom door in file and my older brother led the way. He threw the door open and rushed inside.

I did not see. I could only hear my mother’s voice.

‘Get out of here,’ she said to my brother who backed out. His eyes were wide as plates as if he had seen a ghost. To this day I do not know what he saw.

My mother naked. My father undressed, the two on the bed, on the floor?  What did he see?

I asked this brother once over thirty years later at a family reunion, this brother who is reclusive and rarely speaks. He only nodded his head as I recalled the day but later he said to me ‘I cannot give you what you want.’

To this day, I don’t know what that is either, only I know Germaine Greer is onto something when she said in her concluding remarks:

‘The family is the most dangerous place on earth.’