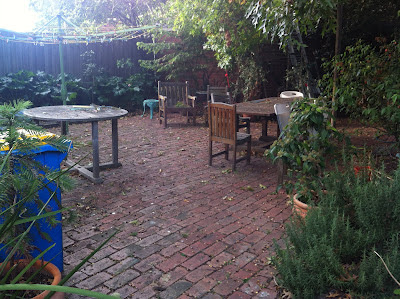 My daughter bolted upstairs from the kitchen this morning, sickened by the smell of cat food. I buy the tinned variety and every morning the three cats get a serve of wet food, as opposed to their evening’s serve of dry.

My daughter has been sleeping downstairs these last few days because she is unwell, a virus of some sort presumably, but each day the diagnosis changes.

She has not been able to eat and the smell of cat food was the last straw. I tried to feed the cats in the hallway away from the kitchen but it was not easy. The cats are creatures of habit. They were confused about this new position for their breakfast and I needed to keep the kitchen door open to entice them back inside the hallway.

The smell wafted through to my daughter despite my best efforts to protect her from further nausea.

It is hard dealing with competing interests. My head is filled with them at the moment, beyond family and work demands, competing projects: a paper here, a book chapter there and finally this idea of turning my thesis into an accessible book.

Every so often another possible project rears its head and I want to take it on too, but I have to discipline myself to stay with the tasks at hand. Otherwise I become like Mother Goose’sold woman in the shoe, the one who had so many children she didn’t know what to do…

Speaking of old women in shoes, my mother has declared she will now live till she turns one hundred, at least she would like to do so assuming she continues to feel as good as she does now.

I shudder at the thought. That is another eight ears. Eight years of travelling down the freeway for half an hour each way every weekend to visit my mother in her retirement village home. It is a repetitive journey and time spent with my mother is even more repetitive.

Her memory is fading, her short term memory that is, so unless we get onto a topic from her childhood we are stuck in a Ground Hog day type scenario where we keep going over the same old ground.

I try to be tolerant. I try not to groan outwardly as I grown inwardly when my mother asks me for the fifth time what my youngest daughter is up to these days and how many grandchildren does she have.

‘Nine,’ I tell her. ‘Nine grandchildren, the same number as your children.’ That should help her to remember, but she has a mind only for the past, the future is a matter of clocking up years so that she can boast about reaching one hundred.

Why should she not crow? Her life has been her family. She was obliged to leave school as a fifteen year old to take care of her mother’s family of seven before she married seven years later and began her own tribe.

So many women of my mother’s generation were forced to stay at home to care for children, to give up all aspirations of a career, not even to entertain one in the first place.

The cockatoos are out in force again this morning. Whole sheets of white cockatoos with their yellow tufts aloft swoop down onto our oak tree in the back yard. They hack at the acorns and leave them in smashed piles on the bricks. They eat only a fraction of the acorn and discard the rest.

They’re out there now cluttering the sky with their clatter. Last week I saw a red berry tree on our street that was white with their wings. They are like locusts and a novel sight here in the suburbs. Usually we see them only in the country.

‘They’re not really cockies,’ my daughter says. ‘They used to come to my school. They’re fake cockies. I hate them. Make them go away.’

‘I love them,’ my husband says. ‘Signs of nature.’

Perhaps my daughter is right. They are some bastardised strain of cockie that proliferates like rodents. Underneath their flapping wings the feathers are yellow, the softest of yellows, lemon yellow. It makes up for the dull white of their feathers. 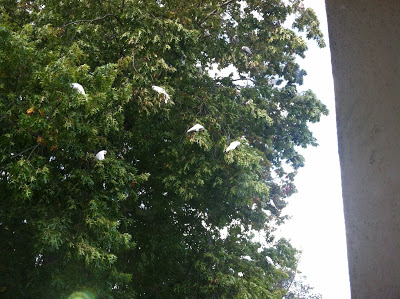 Close up, now that my daughter says as much, I can see they have none of the beauty of the country cockies with their pink or yellow tufts. These cockies have no tufts, other than a stubby white shock of feathers, like a lump on their skulls and they are noisy. They travel in flocks that must consist of hundreds of birds but they don’t scare me, not like the birds in Daphne du Maurier’s story The Birds.

These birds make me want to laugh. Messy buggars. Their shrill cries and the plop of acorns on the roof and gutters, their broken shells underfoot, could be the stuff of life. Busy mothers with too many children to feed. What else can they do?