This morning in the shower where I tend to think my heaviest thoughts, I found myself wondering what it will be like when I write here about my forthcoming death.

I assume that might well happen one day. That I, like so many others I’ve read on blogs and elsewhere in books or on the Internet, write as they lay dying.

And death puts me on mind of the winter cold and thoughts about the fact that at the end of this week my husband and I and a couple of our children and their partners and our grandsons are going camping in the Otway’s to sleep in tents on the cold hard ground.

When I was a child such a trip would be pure adventure, but now I find myself apprehensive.

Tomorrow we plan a trip to the UniQlo in the city for thermals and I have been rehearsing the packing of gloves, beanies and scarves.

I hate the cold.

I hate the cold so much I have never wanted to go skiing.

I went skiing once or twice with my husband when I was a young woman and we were still in that first warm glow of an early romance and nothing could get through to my bones, at least so I thought, until we encountered a blizzard on the day of our return home down the mountain.

I had first met my husband in the July when he had already booked a bed in a chalet, through friends with friends, and within a few weeks of our meeting he asked me to join him.

I couldn’t take a full week off work at such notice but I could take an extended long weekend and so he went without me and then met me a few days later at the foot of Mount Hotham in Myrtleford where I had taken the bus from the city.

We stopped for chains at a half waypoint up the mountain, and my husband-to-be lugged these great heaps of steel around his car tyres to prevent them from slipping.

This was my first alert to the dangers of visiting the snow. Our car could all too easily slip on the ice. Only four-wheel drives could manage such roads.

There was one point where we turned a steep curve on the road and I saw ahead of me something I had only seen on television: the white vista of snow covered mountains and trees, identifiable only by their shape.

Not a green leaf or brown tree trunk anywhere, only sheets of white. The tree shapes sparkled in what was then a bright and sun shining day. So dazzling as to need sunglasses.

At that moment I thought I could come visiting the snow forever. But that thought had emanated from within the warmth of a car.

I changed my mind for all the beauty over the next few days as we traipsed from the hire shop to borrow the right skies for cross-country and then as my husband proceeded to teach me to ski.

I knew about balance from riding a bicycle but this skiing thing required a different sense of balance, one I never mastered.

Too many falls later and I decided the only thing I enjoyed about going to the snow was its appearance and our evenings in the chalet, drinking wine, eating food, warm and cosy and able to look out onto that winter land.

I did not want to go out there.

The day we left after that first trip is etched in my memory as one during which we could have died. And mostly because of the cold.

I had never seen actual snow before beyond a few day trips up mount Baw Baw as a kid where the snow was patchy white against green trees and grass. Then warm winter clothes were enough to stave off the cold, but on Mount Hotham in winter you needed proper boots, gloves and ski gear.

In those days my husband and I were both thin and roughly the same size. I fitted into his lime green ski suit, the trousers at least, and he being in love with me suggested I borrow them from him. He was content to wear jeans.

He had suggested I buy gumboots and thick socks for the times when we were not skiing. I could not afford proper boots. He had warned me. Gum boots are not ideal.  The cold still gets through.

In the warm car on the way back down the mountain I had kicked off my useless gumboots and twiddled my toes against the heat vent. Underneath my husband’s ski suit I wore a thin layer of panty hose.

When we hit the blizzard and my husband could not see far enough ahead of him to locate the side of the road, he needed to get out of the car to check.

‘Give me my pants,’ he said, as though all the love had fled from him in the cold. ‘I can’t go out in these.’

I hesitated, fearful of what might happen should I too need to abandon the car. How could I survive in panty hose?

My husband-to-be had turned off the engine and as he fossicked about outside, safe in his warm ski pants, I shivered in my thin stockings, convinced I would die of hypothermia, even before our car careered over the mountain to sudden death.

Needless to say, we did not die.

A snowplough arrived from nowhere and smoothed the road out in front of the line of cars ahead of us and we were able to follow in an orderly direction down the mountain.

My husband returned his ski pants to my person and settled for his jeans, which had dried by the time we reached the valley.

We lived happily ever after.

But I still hate the cold and the older I get the more I hate it.

To my horror, I remind me of my mother.

She grew up with snow and ice in Holland, but after sixty plus years in Australia, she too had decided the warmth of summer was preferable to ice and snow, unless you could build a big fire between yourself and the cold.

Her room in the retirement village where she spent her last five years was like a sauna in winter .

Old bones feel the cold. Old bones until they become dead bones, when they can feel no more. 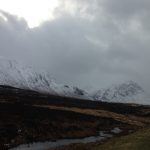 Here for effect: my most recent experience of snow from the warmth of my car in the Highlands of Scotland in 2015.