The year I moved into the composite classroom of grades five and six, I decided to take matters into my own hands. Something had to be done about my father and seeing that no one else, none of my older brothers or sister, nor my mother, seemed able to stop him drinking then I would.

To move into the grade five and six classroom was a mark of seniority. There we were at the top of the junior school next in line as leaders, or so Mother Mary John reminded us whenever someone broke any rules or talked during class time.

To me, this was unfair. What if you didn’t want to listen to the person who spoke to you but had no choice. We sat in rows in twin desks, each with a separate lid but with a shared bench. You could not escape the person who sat alongside you, glued together like Siamese twins.

But Mother Mary John liked to make examples of bad behaviour and the best thing for anyone was to sit alongside a quiet person, a person who preferred to keep their thoughts to themselves, otherwise you could be caught out through no fault of your own and there was no forgiveness.

For the crime of speaking during the lesson.

For the crime of socks that fell down around your ankles when they should have been pulled up snug around the top of your legs just under your knees.

For the crime of untidiness. 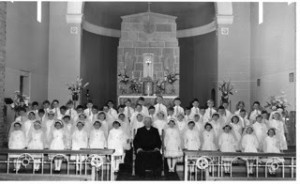 Mother Mary John was obsessed with neatness. Girls had to have their hair pulled back from their face. No fringes by preference but if your parents insisted on you having hair around your ears, at least tell them you must keep your fringe short.

And boys short back and sides was best, that way none of you got distracted by things in front of your eyes.

Had Mother Mary John grown so used to wearing her nun’s habit with its tight wimple tied around her face and a white cardboard piece attached to her forehead that hid her hair. If anything flowed onto her face it would be such a shock.

And we should do likewise even though unlike her we were still kids and we had not yet entered a convent and taken those awful vows of poverty, chastity and obedience.

Neatness extended to our work. Sloppy handwriting or pages with dirty finger prints, or not lined up properly and headed by the letter AMDG, Latin Ad maiorem Dei gloriam for the greater glory of God, were thrown in the bin.

And neatness extended to correctness.

Mother Mary John loved to mark our work with dark crosses beside every wrong sum, but she wanted us then to repeat the calculation as often as need be in order to get rid of that big black cross.

Like a sideways crucifix. No wonder she hated them. No wonder she longed for ticks only. There were a few kids, mainly girls like Bernadette Keating  and Kathleen Sheehan, who always managed the long line of ticks that signalled genius.

They sat close to the front and beamed whenever Mother Mary John looked their way.

I tried to be like them. I preferred the status of good girl to that of troublemaker but try as I might I could not get rid of the messiness that dogged me daily.

My socks had lost all elasticity at the top and no sooner had I pulled them up, even as I sat immobile at my desk, they were down around my ankles.

My big sister gave me some of the elastic band she used for her skipping game, so I could make braces by tying a small piece to form a circle. I pulled it up over my socks up to the top under my knees and folded a short length over. This way my socks stayed up. But if the bands were too tight at the end of the day when I took off my socks there was a red indentation around the top of each leg that ached.

Cutting off circulation was the thing you did after you suffered a snake bite in the bush. The thing you did to stop the poison from flowing through the rest of your body and up to your heart and eventually your brain where it would kill you.

With so many rules behind me, I could not understand that my father had no hesitation in breaking them.

He did not go to Mass on Sundays. He did not wash his hands after he had been to the toilet. I saw him come from the bathroom and there were no sounds of water splashing.

Worst of all he was cruel. He told my brothers they were stupid if they could not beat him at chess.

He told my mother she dumb when she could not understand a move at their bridge game and at his worst, after he had drunk a whole bottle of brandy on a Saturday night, he turned the television as loud as he could and glared at my mother who was trying to ignore him.

He threw his dinner into the kitchen sink, full plate side down.

One year he dragged the Christmas tree complete with baubles and angel at the top onto the floor.

He tore my mother’s dress from her body while she tried to cook our dinner and he used swear words even though he got the word fuck wrong and said ‘fock’.

Mostly he cursed in Dutch, but I could tell it was swearing by the way it made my mother’s face crumple in disgust and despair.

Someone must know about this.

If someone else knew then they would do something to put a stop to my father’s drinking.

There must be people in the city several stations away by train who could put a stop to my father’s drinking, someone in one of those tall buildings, like the ICI building, near the Cathedral.