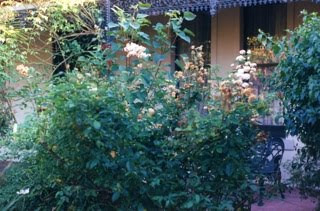 The council by laws officer knocked at our door again yesterday morning to complain that the roses on our fence line are getting out of hand. A sweet young woman, she asked me out to the footpath to show me how much the branches overhang the street.

She was right. Almost over night they had spread their tentacles and I could see signs of where some presumably irritated passer by had broken off a branch. The broken branch was white, like a wound bled of blood.
‘Can you let me know when it is fixed,’ the bylaws woman said.
‘I’ll do it now,’ I told her.

It was a Saturday morning and it was easy to get out the secateurs and hack away, satisfying even. In the back of my mind I imagined my complainant standing somewhere nearby and observing his/her success. He/she had forced me to take notice. The thorns now pricked my fingers.

I tell myself I’d prefer such people approach me directly. But it’s probably better to hear the news from a council person. The council folk are pleasant in their dealings, at least so far they have been.

Roses inside the fence.

It’s still warm here, the tail end of summer, moving into a fruitful autumn. We’ve also had a lot of rain and so the garden thrives, especially the roses.

I sit on both sides of the fence as regards the rights and wrongs of this: I can imagine myself as the irritated passer by, annoyed that her walk along the footpath has been invaded by a thorny rose branch, and at the same time, I am the person from whose house the offending rose branch points its thorns. It happens so fast I scarcely notice it. I should of course be more vigilant.

I have found the best way to deal with complaints – assuming I agree with them – is to go along with them, to apologise, and to try to rectify the fault as graciously as possible. Underneath though, there is another me who would like to rant and rave at the extraordinary nature of a person who would go about making it their business to ring the council to protest about other people’s gardens. They must be seriously offended or vexatious to go to so much trouble.

As I get older I tend towards less graciousness. I complain more myself and I let it be known more and more often when I am unhappy about something. Such as when people telephone our house uninvited in order to beg for money for some charity, or to ask a series of questions for some research they are conducting.

I resent the effort required to answer the telephone, and the fleeting expectation of someone pleasant at the other end, someone with whom I might enjoy a chat, only to find a stranger who asks before I can speak, ‘How are you today?’
‘I’m not interested,’ I say without listening further and hang up.

And then there are those folks who occasionally leave a comment about my blog. ‘We love your blog, especially such and such a post. We’d like to promote it.’ And it is clear from the way they write, they have not even read my blog, and this assumes they are a person and not some computer generated piece of spam.

When I go to their blog to check out who should write such sweet nothings, I find they exist only as a blank profile, if at all.

After I had finished cutting back the roses I tried to ring the bylaws officer to report my good work, but the after-hours receptionist at the council told me I could not leave a message on the weekend. So I sent the bylaws officer an email:

I’ve pruned back the rose branches on our front fence, hopefully to the satisfaction of the person/persons who complain. The roses have been on the fence for the past twenty years but only in the past six months have we had complaints. Yours is the second.

We try to keep the roses in check but at certain times of the year they go berserk, as you can imagine. In any case, I’ve trimmed them back as far as I can. Hopefully, they’ll stay settled until the gardeners return in a couple of weeks and can give them another prune. In the meantime, I’ll keep my eye out for any stray vigorous and unruly branches. 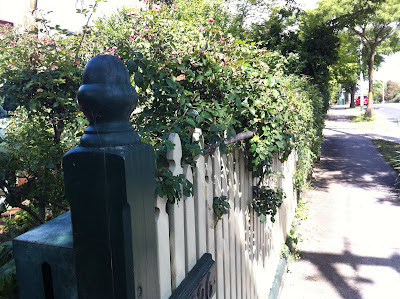 Roses outside the fence.