I know it’s against the rules to blame anyone, but I blame you. I’m all grown up now and should know better, even so, it’s hard to get beyond that sense that I keep chasing you in all these men I’ve met over the years who turn out wrong, not because they themselves are wrong but because they’re not you, the you I needed when I was little.

You even spelled my name wrong on my birth certificate, not that it was you who spelled out the letters. You must have gone to Births, Deaths and Marriages to register my name and sat in a small office with a clerk whose job it was to take down the details. And you got it all wrong, my name spelled in the English way and not the European and even the births of my other siblings, the ones who came before me, you listed in the wrong chronological order.

These things matter, to me at least, even if they did not matter to you. It’s the order of things. The way we’re put onto this earth to live out lives in a certain order in families from oldest to youngest, but you paid it all little heed. We could all be one just mess of children, each one indistinguishable from the other.

And then that decision to name me after my mother, your wife. What about that decision? Did you have a say in it? I found out later I should have been named Petronella after your mother, but my mother told me you hated her so much, your mother that you wanted none of your children to be saddled with that name. That was good of you. Bad enough to be saddled with my mother’s name but then to cop your mother’s name, the one you supposedly hated, far worse.

You were tall and intelligent enough to beat Barry Jones on Pick a Box not that you’d have tried. You’d have had to front up on the television screen in front of all those viewers. Not for you the performance, at least not one held in public. You preferred your own company but then from time to time when you grew lonely you took off in search of one of your daughters, one would do, preferably the oldest but if she was not available and my mother was nowhere to be seen you’d go after me or one of my younger sisters.

But I was smart, Dad. I knew how to avoid you. I knew how to make myself invisible, as thin as a sheet of paper. I knew how to slide from room to room on tiptoes, silent as a beetle and just as small, and you did not see me as I slid down the hallway past those double glass doors that led into your chamber whenever you called out my name.

You called and you called and the more you called the more I plugged my ears and hid from view, from you, from everyone. Out back to the laundry toilet with the door closed tight even without a lock. You refused locks in our house. You wanted access at all times but you could never access me, could you Dad? You could never get to me, inside my body, under my skin or into my brain.

I held firm. I held you at arm’s length and now I have to suffer the consequences, the guilt that slides like treacle down my back and sticks to every pore of my skin, making it hard to breathe.

My younger sisters weren’t as smart as me. They heard your call. They came when you called. They went into your bedroom and closed the door behind, and even though they were five and eight and I do not know what happened behind that door, nor am I ever likely to know because the older one of those sisters has sealed her lips tight like a clam and she will not speak to me nor to any of the others and the younger one cannot remember other than to tell me how ten years later when she was fifteen and we older ones had all left home, she heard you at her doorway late one night.

‘Leave her alone,’ our mother said and you skulked away like a rodent. Never to pester her again, except in her nightmares.

As for me, you still appear in my dreams, not as often as before. I can still feel your presence at night in the dark when I tread over cold tiles to the toilet and hold my breath fearful of your touch. Always your touch, the touch I avoided throughout my childhood, the touch I feared that has made me now into a woman afraid, afraid of closeness, afraid of penetration, a woman who has sealed herself off from too much bodily connection. And I could not reclaim my body long after you had left. No body, no chance of penetration, no chance of invasion, no chance of the burning touch that drives even stronger people mad. 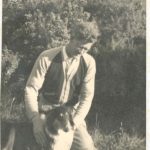 I want to complain about my mother’s plans to buy my sister pantyhose. I am older than my sister and I am still in socks. Why should she have stockings before me?

But I do not want stockings. They are too grown up. Pantyhose are the new thing – stockings like tights that go all the way up to your waist. You pull them on like trousers and do not need to support them with a suspender belt.

How I hate suspender belts. I wear them in winter for school. Mine invariably loses the little bobbles that I poke through the hooks to keep the stockings in place. Once I lose the normal bobbles, I use three-penny bits but the coins are not attached except by the force of the stocking through the hook. They easily come adrift and I wind up with a threepenny bit hanging around my ankle underneath the stocking, which sags on the side where the coin has come loose.

Pantyhose belong to a new breed of women, modern women, not twelve year old girls like my sister, besides I should have them first. I am nearly two years older. But I do not ask for them and my sister nags. She nags and nags and drives my mother to buy them for her, even though we do not have enough money for such items.

My mother hums. She must be nervous. The bus turns the corners too fast and I slide across the seat right up against her. My mother’s body is hard and soft at the same time. She has lost her stomach muscles, she tells me from having so many babies.

An ambulance screeches past. Its siren splits the air. My mother hums on as though she has not heard. I watch the driver’s neck. It has uneven black stubbly bits that run down and hide under his collar. The bus driver has fat stubby fingers that work the gears whenever we slow down to stop.

My mother looks ahead, still humming. Her nose juts out hooked. She is proud of it. Aquiline, she says, like an eagle. A sign of aristocracy. My mother is proud, but she sits hunched over in her old green coat with her handbag on her lap. She does not wear pantyhose. She wears stockings held up with her girdle. The girdle is pink, skin coloured. She wears it to hold in her stomach muscles on account of all those babies.

My mother is fat and frumpy and I am pleased about this. I would not want a mother who looks young and is pretty. Mothers should look like mothers.

My mother fiddles in her handbag for her compact. It opens with a puff of powder; sweet and tacky to smell like Lux Soap. My mother dabs the powder on her nose. She does not want her nose to shine. She squints into the compact’s tiny mirror and smears on a line of lipstick. Glossy and red.

My mother was very beautiful once. We have a photograph. In it she looks like a movie star. She gazes out from the photo with movie star eyes, with a wistful look, as if she is performing for a camera.

The top of the bus brushes against the branches of street trees as we turn corners. At Stanhope Street it stops for an old man who fumbles in his pocket for change and nearly falls over when the bus starts up again.
‘Pull the cord,’ my mother says. ‘We mustn’t miss our stop.’
I am taller than my mother. The cord like a skipping rope is taut till I pull on it. A loud buzz and the driver slows down. We walk towards the shops along an alleyway that leads to the train station.

My father will kill us all. The thought pops into my mind and I want to push it away but it will not go away. He will kill us all one by one. He will start with my mother move onto my sister and then it will be my turn. He will work through the girls and then start on the boys. I have not yet worked out how he will do it, but I know he will.