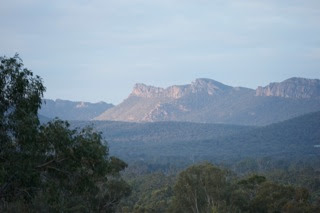 The rash began as a series of red lumps on the lower half of my legs and because I woke to it on the first day of our holidays away my son in law who was spending some time away with us became convinced it was caused by bed bugs.

We spent only three nights away but for two of them from the onset of the rash I lay awake imagining the mites digging into my flesh. No one else was affected. In those first few days the rash seemed minor and I decided that as soon as I arrived home it would all clear up in the absence of those bugs. But it did not.

They say it is not uncommon to go on holidays and to get sick, as if your body, which has been driving you on for days, weeks and months decides at last now is the time to collapse.

I cannot say I am sick. I am well enough through it all but the rash has spread further up my legs and onto my arms, and even into the little nooks and crevasses of my body where it itches away and refuses to let me sleep.

Last Tuesday after our return I visited the chemist. Our regular chap is away on holidays and his fill-in thought the rash did not look like bites. He offered me antihistamine and a light steroid cream to help heal the itch.

Another day passed and the rash grew worse so after Googling one night and changing my diagnosis to folliculitis I took my self to the doctor. He agreed with that diagnosis and decided a dose of antibiotics should do the trick. He suspected that I’d had a virus somewhere down the track, certainly unbeknown to me, and these sorts of folliculitis things the doctor said can flare up when your immune system is compromised.

It’s possible, he said, that you had a tiny nick in your skin and the bacteria, which lives on the surface of your skin and gives you no trouble at all sneaks in and starts up a chain reaction.

Fine, antibiotics I thought that will put an end to it, but two days later and the rash was worsening, so back to the doctors and this time he suggested a whack of cortisone.

The dreaded cortisone. I have never been on cortisone – or prednisolone as it’s called here – before but the doctor insisted it’s okay to take it for short spells to block what he now considers most likely to be some sort of allergic reaction and probably a delayed response to that damn invisible virus.

My body feel like it is breaking down, at least my skin is, and the worst of it is the itchiness. I can wear trousers and conceal the spots and lumps and bumps. It’s cold at the moment, too, despite the advent of spring, so a cardigan is necessary at all times. I can hide these blemishes to outsiders, but not to me.

This itch is at its worst in the middle of the night. When I’m snuggled up in bed and heat up, the itch comes to life and moves from one part of my leg, to my arm, to my belly and back again. Always an itch somewhere.

I cannot then stop myself from clawing at my skin as the itch moves around, even when I know to scratch at a itch is not a good thing to do. There is always the danger of breaking the skin and making it worse.

But what can I do in the middle of the night? The doctor did not prescribe anything for topical relief because he said antibacterial or antibiotic ointments would probably not touch it, this inflammation is coming from inside.

What is going on in my life just now to cause this sort of skin reaction?

Your skin is your greatest protection. It seals in your insides. I think of skin reactions as reflecting a troubled internal state.

It’s holidays, although they’re ending now. I am soon to submit my thesis but it’s under control. I will be sad to say goodbye to my thesis. It has been a loved companion these past seven years and of course there’s then the question of what will I do next? This troubles me, but only a little.

It’s not far from the first anniversary of breaking my leg. I’m about to have a routine colonoscopy, you know the sort we all dread. The last time my husband had one of those he wound up with a heart attack. That’s unlikely to happen again, or to me, but still it’s a fear.

Finally, I took on medical power of attorney for my mother last week, a responsibility I share with my older sister and for some strange reason it feels ominous.

My mother continues to survive. She turns 92 next week and I’m apprehensive about how long she can go one. Although, as the woman in charge of my mother’s retirement village says, she’s not palliative yet. She had been but she recovered.

I suppose these are enough reasons to be troubled. Though I am aware of these issues. There must be one hiding away deep in my unconscious of which I haven’t a clue. Worries do that you know, at least I believe they do, and they sneak out when you least expect them and can often express themselves through your body.

I have a tendency to interpret everything on psychological grounds and it does not suit me to put it all down to a purely physiological response. There has to be something more to it. Of course this notion does not sit so well with the notion that one day we will all die. It is inevitable. We will have to die of something and that something could take multiple forms.

Here I go again agonising over the mind body link, trying to put the old Cartesian spilt in place even when I know it does not exist. Our minds are our bodies. Our bodies are our minds and yet I still tend to think of them separately.

Beyond our bodies there’s the environment. 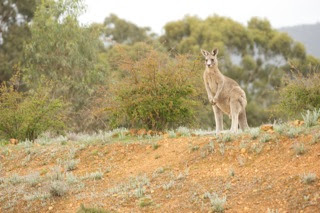 Last weekend in the tranquil Wartook Valley among the shining kangaroos my body let me down, at least my skin failed to hold me in. You’d think I’d grow from the experience. But every time I go away something goes wrong with my body. Invariably I get constipated. I get things like tinea or cold sores on my lip and now this: bed bugs or folliculitis, or an allergic reaction to a virus and that of course does not include the practical issues of possible plane crashes or car accidents.

In some ways I put it down to the experience of being born to migrants. I still sense my mother’s pain at having to leave her beloved homeland. I always imagined that she would have preferred to be elsewhere and it left me with the odd feeling that Australia, my home, was not good enough for her. I resolved over time then that I would stay put and now even short trips away unsettle me.

I am a travel wowser.