In a bid to save my lowest incisor from falling out, the periodontist recommended a third skin graft. A third, I say, and the worst one of all.

This time the good doctor needed to wrench out my lower lip and press hard against my jaw to hold the small flap of skin he’d taken from the roof of my mouth and attached at the gum line.

Not a pretty procedure.

Every time I tell people about it I see them wince.

Bodies are such fragile things and when it comes to our own we take comfort from giving all the grisly details to anyone willing to hear. That way we share some of the discomfort.

In every grimace and groan there is a sense of the unspoken: ‘You poor thing, how awful. I’m not sure I could have tolerated that.’

And now the only discomfort left is the gathering of stitches at my lower jaw, still holding the slip of skin in place, though hopefully no longer necessary, assuming the graft has taken.

It’s been ten days now and there are no signs to the contrary but these stitches, the non-dissolving type – presumably because they’re in my mouth and saliva might have eaten away too soon at the dissolving type – remind me of a fish caught on a hook, the same stinging sensation every time I move my mouth around to talk and to eat.

I have a photograph on my desk of my siblings, all nine of us, posed together for the camera in 2009, the last time we ever came together as a complete group. 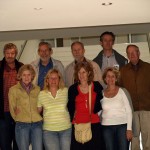 We meet in snatches, one or two sisters, brothers, a brother and sister here and there. A large family fractures simply because of its size, I wrote many years ago. Ours did. We could not sustain our mother’s wish that we be together in harmony forever more.

It may well be that we never come together as a group again. We are reaching the stage where one or another of us is likely to die soon, given we range in age from the mid fifties to the mid seventies.

For almost twenty years – no longer – my mother gave birth to babies. She started at twenty-three years of age and her last baby, conceived in her forty third year, was still born. I was ten. Her first daughter died too, as a five month old during the war. My mother had eleven children all up and nine of us survived.

I write about these numbers often. They are a testament to something. My mother’s greatest achievement, my father’s greatest burden, at least he argued that way.  All those children, he complained. ‘I should have taken the pill’.

There was no way known my mother would take the pill.  Good Catholic she was, contraception was out of the question. And so it was my parents had many children and my mother relished every new arrival, mourned the lost ones and my father’s resentment multiplied.

The rough end of the stitch cut close to the wound points out and scrapes against the inside of my mouth. Not painful but irritating. And I must wait another week before the doctor will remove them.

I can only imagine the relief now but it’s a comfort to think that soon enough it will come.