The year I turned ten, we began to wear mantillas to Mass. 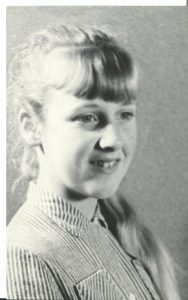 There was never any official announcement just a slow slide from women with hats on their heads – Sunday best hats, big flowery productions, hats that sat on their heads like pill boxes (a term that puzzled me for its connection to medicine) or floral bouquets stitched together and held fast with a pin – to wafer thin spider webs of lace that floated on top. Unlike those hats of old.

Those old hats were not the same as the hats we see today on race days down at the Caulfield race course or Mooney Valley.

The hats of my ten-year-old days were more formal, silent, less a statement of beauty than of obligation.

To cover your head before God. Not that anyone ever said as much. Not that the covering of our heads before God’s was stated as a requirement, but somehow, at the time it struck me as a necessity for women, who also tended to have more hair, lots of hair, long and even short curly hair, to put a hat on top of it, and so maintain order.

It was not until some six years later when men started to let their hair grow, too, that I began to wonder about these things, even after I had noticed that the men in my father’s art books also wore long hair and bright silken clothes that could compete with any women’s fashion of that day.

The mantilla slipped into your pocket just as it slipped into use. Easy and convenient a triangle of lace, black for winter and white for summer like the nuns wore.

The mantilla matched every outfit unlike our hats that could sometimes clash especially when my older sister took to wearing trousers. Trousers were not a match for hats.

One Sunday morning, flanked by two of my sisters and walking along the streets of Camberwell on our way to church, I stopped mid stride, pushed my fingers into my coat pocket and realised to my horror there was no mantilla.

My fingers poked around, first in my front pocket then in either side pocket.

‘I can’t find my mantilla.’

‘Here,’ she said and rifled through her bag. My sister took a handbag with her at all times then as a mark of seniority, or a sign that she had possessions, the type most grown-ups had, things that warranted safety, a place into which she might put her treasures, including money.

She handed me a folded white handkerchief, and as I unfurled it the lines of each corner where the iron had pressed most heavily stood stiff as a mountain ridge with none of the gentle caresses of a mantilla’s folds.

‘But people will think I look silly,’ I said.

‘You’d look sillier without it,’ my sister said. ‘You’re too big now to go without a hat.’

We walked into the church of Our Lady of Good Counsel and sat towards the back in the only pews with enough space left to seat the three of us comfortably.

I was glad to be down the back, that way fewer people would be able to see me with my white covering. I looked across to a sea of heads, the back of men’s heads neatly clipped and women, the older ones still in hats and the younger ones their domed heads flattened under the weight of white or black lace.

We were between seasons. No one appeared to look over towards me to snigger.

I needed to find a way of hiding. At least in my head. I looked up to the sorrowful mysteries hanging from the walls of the church and noticed the frayed white cloth that Veronica held out to the thorn crowned head and blood-spattered face of Jesus, a cross on his shoulders on his way to crucifixion.

I thought I could see my handkerchief similarly, not as a blood-stained relic that could add to my indignity, but as a consolation to comfort Jesus though how I could do this I had not yet figured out.  Still it was like those times when my mother railed at the left overs on our plates.

‘Think of the starving Biafrans,’ she said. I figured then, if by eating all the food on my plate, even when I did not like or want it, I could help someone else in Africa who was starving. And then the white cloth on top of my head might help someone else in their suffering.

And so, the makings of my saint hood began.

Mother Margaret Mary stood in front of the class and handed
back our papers.  One after the other we stepped
forward onto the raised platform where she stood in front of her desk and reached
out from her pile
I knew it would take an age to come to my name.  Mother Margaret Mary went
alphabetically.
Some kids smiled as they walked back to their desks; others
frowned.
When she finally called for me, I scraped out from behind my
desk, one where the top was attached to the base and you slid in and out sideways.
‘I knew you weren’t any good at mental,’ Mother Margaret Mary
said as I reached out to take my test.
‘But not this bad.’
I had not known I was this bad either.
I’d tried hard to figure out those numbers, those additions
and subtractions, multiplications and divisions, but my head went fuzzy and it
took me ages to get out one sum after the next.
‘Two out of ten,’ Mother Margaret Mary said.
She said it in a way that made me feel small.  She said it in away that made me wonder
whether she enjoyed my bad mark.
This was not unusual.
Mother Margaret had a way of triumphing over our childhood mistakes.
When one of the boys talked to his friend during class when
he should have been silent, she called him out to the front and then took a
ribbon from her desk.  She kept a
collection of ribbons there, ribbons that had fallen from the hair of some careless
girls and been lost.
She took the ribbon and lifted a piece of loose hair from the
boy’s head then tied the ribbon round it in a bow.
Then she ordered the boy to
stand outside of the classroom in the middle of an empty rubbish bin that stood
near the door.  She kept him there for hours.
‘If you act like a girl, you’ll be treated like one.’  That presumably was a reference to Mother
Margaret Mary’s choice of ribbon for his hair, but I never understood the
reference to girl’s behaviour nor the purpose of the rubbish bin, other than to
tell the boy he was nothing more than rubbish.
I didn’t know about humiliation in those days.
I didn’t know then that some people took pleasure in making
other people who were already vulnerable by virtue of their size or some other
difficulty, feel even more vulnerable.
Years later, when I was at senior school and had grown taller
and begun to realise that maybe I could be good at other things and, although I
was still no good at arithmetic, I could at least count and measure size.
I met Mother Margaret Mary one day at my new school.  She had come with other nuns to visit when
they appointed a new reverend mother.  I saw
her at the back of the chapel.  I swear
she had shrunk.
She looked so much older that I remembered her.  And for the first time in my life it occurred
to me that people can change, and those who wield power over you one day, can
the next, become like the emperor of no clothes.
‘The queen wipes her bum, too,’ my husband once said to me
when I was approaching a meeting that terrified me.
He was trying to give me courage.  And in a strange way it helped.
Not the sight of the queen on the toilet, but the idea that
Mother Margaret Mary might also have used the toilet and that she, too, had a
body.
When I was a small child who failed her mental arithmetic test
I had imagined Mother Margaret Mary had no body.
I had imagined she did not eat, or sleep, or use the toilet
like the rest of us, and that outside of the classroom and staff room she spent
her days in church.