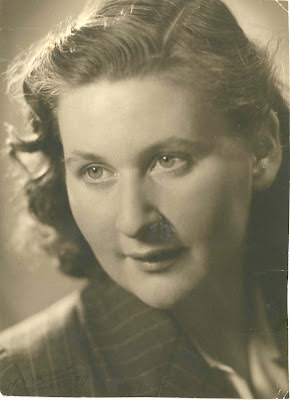 My mother wears the tiniest of earrings in her lobes, tear shaped drop pearls or minute balls of precious stones coated in gold and held on thin gold tangles. Even now her earrings strike me as a feature of her aging, her determination to hold onto life and all its possibilities reflected in those jangling ornaments.

My mother did not always wear earrings or any other jewellery for that matter, apart from her wedding ring. She tells the story of how in Holland during the Hunger winter of 1945 a farmer tried to get it from her in exchange for some potatoes. She refused.

My ‘movie star mother’: no need for jewellery then.

I think back and I cannot visualise my mother wearing a necklace or a bracelet, certainly not earrings. There are no jewels on display in her photographs, no efforts at adorning her body with trinkets of beauty. Nor did she wear much makeup, other than her trademark smear of red lipstick whenever she went out – if only as far as the local shops – and the dusky pink of her compact powder. She dabbed the puff against her cheeks and on her nose, her hooked nose. Aquiline, she said, like an eagle, and a sign of aristocracy.

More recently my mother tells me her brothers used to say she was Jewish because of the shape of her nose, which I too have inherited, though perhaps not quite as pronounced as my mother’s.

It seems odd to reflect back on the meaning of such a taunt in those days, especially given what happened during the second world war.

There is some evidence that there was a Jewish grandmother in my family of the great great variety, going back several years but my mother does not talk about such things these days.

Purity does not sit well with me. The notion of a pure breed. It feeds our tendencies to see ourselves as superior or inferior for no other reason than the colour of our skin, the shape of our noses, the nature of our hair.

I suppose I could add a touch of madness to the list of inherited tendencies. Not that I think madness is carried in our genes, maybe a predisposition towards it, but madness needs a certain environment in which to flourish. On top of which in the primitive recesses of our minds, in the dim dark corners of our dreams, I reckon we all sport a little madness, and a good thing, too. It adds to the variety and the creativity that make up our lives. Without a quirk of eccentricity, not too much, not too dominant, our lives would be all the more dull.

I was telling you about my mother’s passion for jewellery. Mine is greater. I prefer silver to gold, not just because of the prohibitive cost of gold, but more because of the blue in silver. Blue is my favourite colour. The blue in silver, its watery properties, its potential coldness, they all appeal to me in a way the warmth of gold does not.

I did not always have this passion for jewellery. It came on when I was in my early twenties, when I decided what a thrill it might be to wear earrings that hung free from my ears.

In those days I lived next door to a nurse. She offered to help me with the job of piercing each lobe with a thin sterilised sewing needle. There were not the signs in chemist shops then, signs that touted for business in the piercing of ear lobes. Most people – and there were not so many who wanted or wore pierced ears from my memory – took themselves to the doctor for the procedure, but as in so many other matters to which I take a fancy, I wanted my ears pierced then and there.

It is striking how quickly the pain of an event subsides and disappears from memory, rather like the agonies of childbirth. They say women need to forget the degree of pain quickly otherwise they might not go back for more babies after the first.

My friend the nurse cleaned my earlobes with methylated spirits and she plied me with alcohol. In those days I did not drink much by way of alcohol and my choice of the stuff was limited to the likes of crème de menthe and cherry brandy, sweet and hardly efficacious in the process of dulling pain, but I had taken what today are called shots of creme de menthe and waited to feel numb enough and drunk enough to withstand the pain.

It was over soon, but the nurse drove the needle crooked in one lobe and it forever causes me trouble whenever I try to attach an earring. In later years I had my ears pierced properly with a type of nail-gun in a chemist shop. My memory of that event is one of short and sudden, awful pain.

Why do we do it? Why do we inflict pain on our bodies purely for the sake of what some of us consider beauty? I cannot say. I only know that I would not allow my daughters to get their ears pierced until they could be certain of their capacity to endure pain. And all for the purpose of attaching baubles to their ears,in contrast to my movie star mother who waited until after her babies were born to be initiated.