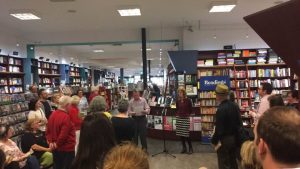 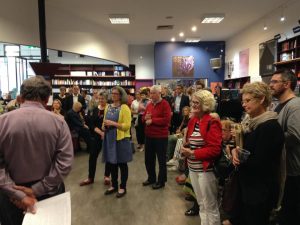 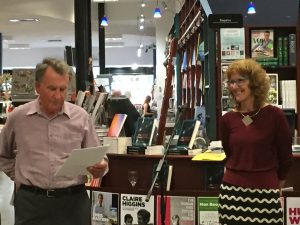 We’ve had one of those weekends that rock you.

All on the go. Birthday parties and visits from an overseas daughter, and my husband now early Sunday morning, travelling in his brother’s ute to collect a son in law’s parent’s no- longe-needed washing machine and take it from Keysborough to Kensington – a hike across the south eastern suburbs through town along the freeway, and then tomorrow morning an early dash to the airport along that same freeway in the other direction, to take the daughter back to her current home in Japan, and then life might settle down once more.

In the meantime, my head’s dizzy with it all.

I’m worried about my heart rate. Apparently it’s too slow, the heart rate of an Olympic athlete, the doctor told me, but given I’m nothing like an Olympian, a complete anomaly.

When we discovered this low heart rate, as low as thirty six beats per minute – I understand most people come in around sixty – I had no symptoms such as dizziness or fainting. But now, every time I find the slightest hint of a swirl in the brain, wobbliness in my feet, I imagine the dreaded low heart beat, in which case the doctor told me I might need a pace maker.

An echocardiogram of my heart last November when I was still in hospital over my broken wrist revealed nothing, so my slow heart rate remains an anomaly.

But now I have a new source for hypochondriasis. I fret whenever my head feels anything other than its usual steady self.

Bodily complaints are standard for people who are getting older and ever so boring, except for the person who’s so afflicted. Interesting perhaps for people who share a similar decline but otherwise too far off the mark for liveliness.

I have an academic friend who’s putting up excerpts from Andy Warhol’s diary daily on her Facebook feed.

Fascinating stuff because we know it’s the great Warhol but if we didn’t know that I suspect his trips to the supermarket and encounters with so and so, and thoughts about this and that would be as boring as my description here.

The good news is Interactive Publications have agreed to publish my book later this year.

I had planned a loud megaphone call out to everyone with this good news but it’s funny now that I’ve signed the contract, my sense of the journey ahead causes me to settle and reflect on the need for quiet. 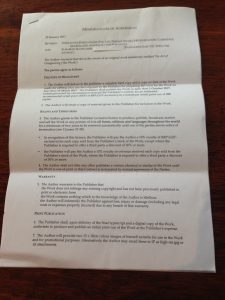 Though in this lifetime with so many loud and competing voices, I probably need to shout about it.

Still I find myself imagining something might come between me and this book even yet.

That’s a long time in the writing. This book has seen as many incarnations and there have been many years between.

In essence, it’s the story of my childhood, the life of a girl who spent most of the time waiting for her turn to come, her turn to recoil under the weight of her father’s fingers, alone in the dark, a girl who then learned to hide, to become invisible, to disappear.

Disappearing and trumpeting your existence are antithetical notions, so I will need to adopt a few different personae to get my way across the world stage of writing.

It might well be fun but it’s also a little scary. Enough to slow my heart.