There was a time I collected heroes, like people collect stamps or porcelain figurines or coins or guns.

I collected heroes to shore up a sense of myself as someone attached to someone else, someone who might make up for my shortcomings.

Not that I thought about it like this at the time. At the time, I always imagined that by attaching to this person I might better myself by association.

I went once to hear a talk from a prominent Melbourne psychoanalyst – not one of my heroes, but esteemed by many – who was speaking on the topic of envy. As he spoke, I recognised something in his tone that hinted at contempt for his audience, we the people seated before him on hard backed vinyl chairs in an over air-conditioned room that made us want to huddle our coats closer.

Was it only me who smarted at the sense he was mocking us, not only his audience but more especially the people who went to see him for help, those whom he talked about as case examples?

A woman who had approached him to deal with her anxiety. A woman whom he considered could have helped herself more.

A woman, who wanted him, her analyst, ‘to wipe her bum’.

He said those words through tight teeth as though he thought this woman was not worthy of his time.

‘We only wipe the bottoms of very small children,’ he said. ‘At a certain age you need to start wiping your own.’

How the issue of wiping bums relates to the notion of envy, I cannot recall, but his talk left me cold.

This analyst has since been discredited for sexual boundary violations, and he has moved out of the glare and into the shadows.

This is what happens to some of my heroes.

Others, like Gerald Murnane glow more brightly than ever. And the writer Helen Garner, both are writers whom I have followed, held firm to their almost every written word, admired them from afar, but now as I age, am I falling victim to that most ghastly of sins, the sin of envy?

Now as I become more critical of my heroes, am I simply jealous, or worse still envious?

Envy is worth thinking about because it is insidious. Envy, unlike jealously, cannot acknowledge admiration for another person.

When you’re jealous of someone, you know it. You feel it in your bones.

Even as I tell myself these things do not matter and I’m good enough as I am, I can still feel the purple pain of jealousy.

I try to handle it by acknowledging this feeling, to myself at least.

You’re just jealous and why not? What, he or she has done is marvellous. Anyone would feel a hint of jealousy alongside their own paltry efforts.

But envy, now that’s something else again. When you’re envious of someone or something, you can’t admit to yourself that you wish it was yours or that you admire what someone else has or can do.

When you’re envious of someone, your impulse is to put them down, to belittle them, to decry their value.

When you’re envious you can’t even let yourself know that there’s something that you want.

It’s rather like that fox and those grapes that were out of reach.

The fox saw the lush purple grapes hanging high overhead and he wanted them. He tried again and again to reach them and when finally, out of breath, he realised those grapes were beyond his reach, he told himself they were bitter anyhow.

Beware of envy. It spoils things.

It spoils things for the person envied and for the one doing the envying.

It spoils things for everyone.

Be jealous, by all means. In many ways it’s a compliment to those whom you admire, but be wary of the hidden charge of envy, it can ruin everything.

When did it begin, this tilt towards jealousy, looking over my shoulder at the one who’s doing better?

My mother told the story of how when I was three, toddling alongside her my baby sister in the pram, people stopped to admire this most beautiful baby, her dark curls and blue eyes and my mother came to feel sorry for the way they overlooked me.

A beautiful baby gurgling in a pram is hard to resist. A toddler walking alongside less prepossessing.

Did I first feel the sting of not being good enough then?

Did I first feel a pressure towards needing to be beautiful in order to be admired or did it come later with my mother’s insistence on my best features, my pearl shaped ear lobes and perfect eyebrows?

‘You take after our father,’ my sisters and brothers said and our younger sister after our mother.

We all knew our mother was a beauty. Her movie star photos in pride of place from the days before she and my father married. Slick movie star type images from the 1930s even during the war wars when professional photographers who occupied the streets of Amsterdam and set up shop on the main street tried to emulate the glamour of Hollywood and even the plainest of women could be made to look like Ava Gardner. 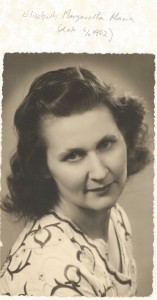 My mother did not need much help in this direction. Her natural appeal was enough and along with her success at making children, my mother considered her skin, her blue eyes and glossy black curls to be her greatest assets.

Even as they turned to grey and her face grew more sallow with age, once she stopped sunbaking for fear of cancer, my mother knew how to pout for the camera while I clinched my lips tight to stop the image of my crooked teeth taking centre place.

Was this where it all began?

And did it shift from the external image to internal attributes such as intelligence when I learned early on that I lacked the brains of my brothers, most of my brothers that is, with one or two exceptions, the brains of the men in the house especially my father who could speak in six languages and could understand the vagaries of physics and name all the chemicals one after the other.

My brother above me, the family genius, my sister below me the family beauty and I in the middle grappling with my mediocrity in a way that dogs me even today, especially when I find myself competing in my head with those others who excel at things that matter to me, at the writing of books and words on the page.

It does help anyone to compare themselves favourably or unfavourably to others and yet I fall into this trap of comparison too often and once inside must find a way of ridding my mind of the green pus of self-loathing that infects my mood.