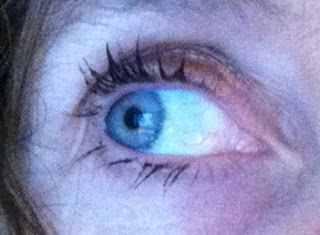 I am having trouble with mascara
these days.  Not that I wear much
of it but it’s harder to see these days to put it on.  I’d need a magnifying glass to be able to see my eyelashes well enough and I only have two hands.  So I tend to apply mascara by touch, and make a mess of it along the way.

All my life my mother told me my eyes, my eyebrows and ear lobes were
my greatest asset.  Therefore, I’ve tended to dress
mine up. My eyes with a touch of mascara, my ears with earrings but my
eye brows I leave alone.
The other day I was horrified when
one of my daughters made an appointment to have her eyebrows plucked.
‘Let
them be,’ I said.  ‘They’re lovely
as they are.’  But no, she insisted
they were like Frida Kahlo’s.   My
daughter takes after her father in her colouring and hair.  Women pluck their eyebrows all the
time, my daughter tells me.  For
some it’s necessary.
This reminds me of the day another of
my daughters gave me a voucher as a Christmas present  to have my eye lashes
coloured.  Even now it seems a
ridiculous idea, but at the time I went along with it in the hope that I might
then be able to forgo the mascara.
For half an hour I sat in a hairdressing salon with strange bits of
protective covering around my eyes while the dye did its job.  Afterwards, I could scarcely see the difference.  It had been a wasteful plea to my
vanity.
I have grown increasingly weary
with the stuff of dressing up for the world.
When I was young I loved spending hours thinking about what
I might wear, laying it out before hand and then showering, putting on
my mascara and eye liner and finally dressing.
Earlier, because I was a slob at school, or
so I believed: shabby clothes, dirty shoes, untidy hair; but also a worthy
student, ‘from a poor family’,  the nuns gave me free access to a series of
classes conducted at my school through the Elly Lukas deportment school.
Once a week for eight weeks a woman whom I shall call  Miss Bright
came from the Elly Lukas deportment school to take us through our paces.  We were in fourth form, the equivalent
now of year ten, all of us aged between fifteen and sixteen years.
The expectation was that most of us
would soon be out in the work force preparing our lives for that big moment
when we met and fell in love with the man of our desires and would soon be
married.
Miss Bright taught us how to dab
nail polish onto a stocking to catch a run before it ran too far.  She taught us how to wash
our stockings separately in hand made lingerie bags, and how to lay out our
clothes every evening before bed in anticipation of the next day.
Given that we would all be off to the
office the next day with early starts, it was imperative that we leave only our
dressing to the morning. The evening, after a light and
nutritious dinner, should be spent preparing for the next day.
Miss Bright estimated we needed to set
aside a good hour in these preparations – cleaning shoes, mending tears, ironing blouses and skirts.  We were to leave nothing to chance.  Makeup from the day before needed to be
removed carefully with the aid of moisturiser and water and little cotton buds
and swabs.  Showers, deodorant,
attention to finger nails and feet were also essential.
Nail polish was tricky.  It
was fine to use it but imperative to keep coloured nails in top shape, with no
chips or cracks and certainly no ridiculous colours as were coming into vogue
in those days.  A pale pink for day
wear was acceptable, one that blended in with the tone of our smart work suits
and maybe red for evening wear, but to be cleaned off before the end of the weekend
and the return to work.
When would we read our books? I
wondered, or get our homework done, not remembering that these duties were
aimed at the woman at work, not the student or school girl, nor at the woman of
leisure.
Finally, there was a long lesson on how to
deal with men, dining out, etiquette and the like.
I did not take the lessons seriously in the end, but the concepts stay with me.  The idea of having to sculpt myself into the perfect woman irks me still.
Today, and throughout the past week,  I’m doing battle with my feelings about the rape and murder of a young woman here in Brunswick.  I’m not alone in this.  Jill Meagher’s senseless death has aroused widespread public grief and outrage.  It has also caused a storm about the difficulties women face in the world, the idea that women are not free to walk the streets alone after dark.
My memories of being groomed to be a fine young woman seem anarchic in a world where women are also the victims of such random and gratuitous brutality.  And I know, despite the horror of this behaviour that somewhere along the line the perpetrators of such crimes are also victims.
I cannot get these difficulties out of my mind.  Everything else pales into insignificance.