There was a silverfish on the wall of our bathtub yesterday. I caught sight of it from the periphery of my vision. A mark to be wiped away until I realised it was one of those monsters, paper eaters and destroyers of books.

Silverfish, a lovely name for an ugly creature, not so much the creature itself but what it does. 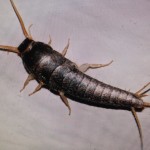 So I plucked off a square of toilet paper and tried to trap it. The fish did a few laps around the bathtub before I had it pinned, and then I flushed it down the toilet.

‘Drown silverfish. Drown. No more paper for you’.

It occurred to me then that my knowledge of silverfish is limited to my childhood when someone told me these insects were pests for the way they ate up books. And I believed them.

A moment later, after the drowning, my guilt set in. Another person might not have been so quick to be rid of the silverfish, this insect without wings and with two long feelers in front. Silver grey like dust, these insects blend in well with the places where we find them, the cool and moist corners of libraries, the place of old books.

There was only one silverfish in our bathtub. Where was its family, the others of its kin?

I saw a YouTube clip on Facebook of a male kangaroo cradling the head of its kangaroo wife, a dying female, while their joey looked on.

And later I saw the short clip of a koala throwing a tantrum and screeching furiously after its fellow koala had ousted it from a eucalypt somewhere in Adelaide.

The koala looked indignant, paws punching the air and it squealed like a devastated child.  The kangaroo, too, had looked grief stricken.

The point of these clips perhaps: animals feel too.

A silverfish is lower down on the animal pecking order. But can we ascribe emotions to the insects of this world in anything but a Disney or Pixar cartoon?

We measure psychopathology by the degree to which a child, typically, a small boy, takes pleasure in plucking off the wings of butterflies.

I find myself remembering a Katherine Mansfield story about a man whose ‘friend’ visits and reminds him of that man’s son who had died in battle six years earlier during the First World War.

Left alone soon after, this man, the father of the dead son, expressionless and in shock, unable to grieve it seems, notices a fly struggling at the lip of his ink bottle. The man helps the fly out and onto some blotting paper on his desktop, where he marvels at the fly’s determination to dry its wings.

Then the man takes out his fountain pen and lets a blob of ink fall down upon the fly, now resting in the sunlight. The fly beats its wings again as if to flap them free of the tormenting ink.

It flaps and flaps until it looks as though its wings are ready to work again, when the man picks up his pen and drops another blob of ink onto its back.

This time the fly hesitates before starting to work once more at drying those wings. All the energy involved in getting them dry, flap after flap of wings, until at last the fly is ready for take off, and once more the man drops a blob of ink onto the fly’s back and this time, or maybe it’s one time later, the fly cannot muster the energy to go on.

It flops down motionless, dead on the blotting paper.

End of story, or maybe the end comes when the old man flicks the fly off the blotting paper and into the waste paper basket, a man unable to grieve, a man who cannot let himself know about how dreadful he feels to have lost a son in a war that he is responsible for, however indirectly.

The wars of old men, the generals who set things in motion, the war lords, the presidents, prime ministers, dictators, men who compete with and try to dominate, men who use their sons as fodder.

And here I am letting my mind wander too far afield.

The silverfish I flushed down the toilet in one swift act did not suffer as much as the fly in Mansfield’s story.

Grief is like that, too. It comes upon us when we least expect.

And grief can also be exhausting, something some of us might well want to tip into the wastepaper baskets of our lives so that we need not know too much about our suffering.

Only, the removal of rubbish or flies or even silverfish does not work.

The grief sneaks back, repositions, like a swarm of insects. It comes again and again to haunt us.