They shifted my mother into a private room, as if they knew she was dying even when they had plans to move her off to a nursing home as soon as they could, so she could live out her life in care uninterrupted.

The little things that had needed their help they’d overlooked, like the puffs of white on the tip of her tongue that she was forever trying to spit away. Until they decided to take out my mother’s denture this thrush came back again and again to torment her. This woman who could no longer swallow and who no longer wanted any food or water to pass her lips.

In the last weeks of her life I increased my visits, not that my mother appreciated them, but out of some sense of guilt and some sense I needed to get there to see her as much as possible before she would be no more. She kept her eyes closed throughout these times, opening them only briefly to catch a sight of this person, her daughter hovering over her. And each time she opened her eyes I sensed, not a look of recognition or of pleasure, but a look that said ‘leave me alone’. Let me be.

It was twilight and the sun was doing its last trip through the sky, letting just enough light into the room to make artificial light unnecessary. I had touched her gently on the hand and my mother’s eyes flickered open, after a shudder, as if her body expected some unwanted intrusion. I had only just arrived and I did not want to leave too soon so I hung about closer to the door than to my mother’s bed at one side of the room. I watched her for signs of life. I watched her as if I knew this would be my last turn to see my mother alive. I watched her in the hope that I might soak in some last minute radiance from this woman who had once welcomed me into the world, who had nursed me for the first three months of my life and had then slipped me off her lap to make room for the next lot of babies that followed me in turn.

I recognised the same hooked nose, the same pointed chin, but her skin, once a vibrant olive glow, had turned sallow and her hair had lost its shape and hung back like a dishcloth from her forehead. It draped around her pillow lank and greasy.

It was a strange and secret time standing there to look upon my mother as she lay dying. A time of reconnection and of severance. All my life I had lived with the knowledge I could never keep up with her. She was always thirty-three years older than me, always thirty-three years wiser, thirty-three years ahead of me in advantage and knowledge. She let me know this often; with every choice I made, except those that suited her. My choice of husband was wrong, my choice of schools for my children, my choice of career as a psychotherapist, my lack of religion. All these things had rankled my mother and she let me know this without words. A hint of disapproval whenever we met such that I had long ago stopped talking to her about the innermost workings of my mind. And I had learned to turn off my own interests whenever she started up on topics of her choice, especially those related to her God and her disapproval of others who took no interest in that God, for surely she was talking about me again. Me and my godlessness. This God, or lack thereof, who came between us.

My mother looked up then, turned in my direction as if she had noticed the soft rise of my breathing or felt my warmth nearby. She turned and opened her eyes. She looked at me and with all the strength she could muster she lifted her hand in such a way as to usher me away.

Go away she seemed to be saying, go away and leave me in peace. I took her instructions, the last sight of my mother alive, a dying woman who wanted me gone. 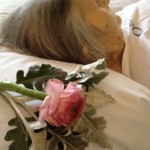 Nursing my mother has become something of a preoccupation. Not so much to keep her alive as to make these last days comfortable. She is not in pain she tells me time and again, but her legs weep. I never knew this. I never knew that legs could ooze liquid as if they have become my mother’s eyes and she cries all the time through tiny holes and blisters in the skin around her swollen ankles.

It is a side effect of congestive cardiac failure the doctors say and there is not much they can do apart from reducing her fluid intake and trying to keep her fluid retention down. But my mother could not survive on a single litre of fluid a day.

I notice she does not even keep a tally on the number of drinks, cups of tea, juice and water she consumes and to my way of thinking why should she? It will not make a huge difference. This slow grinding down heart will only get worse.

Late on Friday night when I unpacked my mother’s bags after she had finally returned from hospital to her retirement village, I noticed a set of wooden rosary beads.
‘Do you want these nearby,’ I asked.
‘Put them there,’ she said and she pointed to the table beside her chair.
‘My father carved that crucifix out of wood,’ my mother said. ‘They were my father’s beads.’

Even to the end my mother has her father in mind. She was his favourite. He was hers. Strange then that my mother should marry a man such as my father, a man who could not/did not make her his favourite, or at least not in so far as I could ever see.

I have yet to work out the psychology behind my mother’s choice of husband, or should I say her husbands, for there were two.

The second husband puzzled me even more, but she was happy with him and although he seemed to me an uncouth, ocker sort of bloke who often put her down, he also treated her well to a degree, though not sufficient to cater for her well enough after their seventeen-year-old marriage ended in his death several years ago.

He left almost everything to his own children and very little for my mother after he died apart from the choice to live in his house for as long as she wanted before it was turned over to his two remaining children.

My mother refused to contest the will. She did not want to make trouble for anyone and so she eked out the last of her days on a pension and the good will of some of her children, leaving only the money she had invested in her room at the retirement village, which will be distributed between all her children on her death.

I have often been jealous of friends whose parents leave a huge monetary inheritance. I know I should be satisfied with my inheritance as it stands from both my parents, my education, my sense of myself, my capacities in most endeavours, but I cannot help but think what a wonderful help it would be to become suddenly rich as has happened to a few of my friends on the death of their respective parents.

Not so for my husband and me. We have been, as far as wealth is concerned, self made. We paid for our own wedding. We have worked hard to support ourselves throughout the years of our marriage and now at this stage I am not so confident that I have not repeated history, managed my affairs badly and will not leave a large legacy to our children, only debts that might consume whatever assets we have gained. I hope this does not happen.

I do not live to leave my children huge wealth but I’d like to think there might be more left over for them when we die than has been left for us, for both my husband and I. His parents were not much better off than my parents and they too had a large family of six.

There is something in this forward looking to my own death which relates I am sure to my mother’s slow and steady decline into lifelessness, but as I drove back home last night from the retirement village after I had tucked my mother into her recliner chair where she now plans to sleep each night – she sleeps better there, as her heels do not rub – I thought I am grateful for this time, this time of nursing my mother, this time to make peace with her.

I have not always been such a faithful daughter.