My wrist has made these holidays difficult. In the normal course, I would be cleaning out rooms, shifting obstacles, filling a skip with unnecessary junk.

But not this year.

This year my still healing wrist means I cannot lift anything with my left hand, heavier than a coffee cup.

Nor even a teacup, as my husband jokes. The weight of a cup of coffee is the extent of it.

I tried the other day to sift and sort my books, but they too are heavy and one book at a time becomes tedious, so I resorted to reading through a box filled with letters from my past.

Letters that, like so many things in my life, remain unsorted.

So many of my older sister’s letters are addressed to my younger sister and me while we were together at boarding school and during the last two years of my schooling when we were farmed out, first to a Dutch family and then onto boarding school to give our parents a chance – as my oldest brother put it at the time – to sort themselves out, unencumbered by the burden of small children.

Not that I was small. I was fifteen when this saga began but my youngest sister and brother were still in primary school and although they were farmed out to family – in the form of an older brother, who was the first in our family to be married, and with two small children of his own – they did not find it one bit easy to be taken from their mother, however much it spared them the agonies of being near their father.

Likewise it was for me. I was adolescent and ambivalent about my mother, but I still wanted her love and care. I did not want substitutes in the form of a Dutch family or the nuns.

Even so many of the letters, particularly from my older sister and brother, encourage us to enjoy ourselves.

‘Now that the novelty of your stay with [the Dutch family] has worn off,’ my older sister writes, ‘I want the two of you to make a really conscious effort in being helpful and happy. When you do get depressed, just keep on smiling and cover up, otherwise you will make [the Dutch family] think you’re not happy with them – and I know you are!

‘Please don’t think I’m preaching to you. That’s about the last thing I want. But I know from my own experiences in the past that it’s not fair to show anyone that you’re miserable or depressed.’

Even if I’m wary of judging the past by present standards, I reckon this type of advice is misguided.

We were unhappy, we tried to cover up and it still backfired.

Later, by chance trawling through Google, I came across Lauren Berlant’s notion of ‘cruel optimism’, the notion that we tend to cling onto ideals and attachments from the past about how we want our lives to unfold, even when such ideals are no longer feasible in the world today.

Clinging to such ideals interferes with our capacity to flourish.

I resonate to this notion and reading these letters from my childhood and adolescence I’m struck by the number of useless ideals to which I once clung, including the notion to keep up a good front, not to complain, not to give any inkling of my unhappiness, and always to keep on a good face.

My mother’s letters are the most telling.

In one letter she writes about the death of a beloved uncle and how sad she is not to be able to talk to ‘nice’ people like that ever again.

‘But don’t think that I am depressed or anything,’ my mother writes. She would not want us to think she was depressed. And then in the next sentence, as though the thought has just occurred to her, the reason for writing this particular letter in the first place, about how only half the child endowment of $18 arrived, instead of the $36 she had expected.

When she rang the relevant department, they told her my mother was no longer eligible for child endowment for my younger sister, as by then this sister had left school and although still a student at teacher’s college, the government now paid her an allowance, a studentship, and child endowment no longer applied.

My mother relied on these endowments, which came to her and not my father, to pay part of the school fees.

She wanted to pay the school fees because the ‘nuns have always been so good to us’ and therefore wondered whether my younger sister and I might be able to offer her some money to offset the shortfall, ‘only this once’.

Such a sad letter and those comments were prefaced by other thoughts such as ‘Are you still slimming or gaining? And the boyfriends?’ she writes, without qualification.

The boyfriends as though they were some blemish on our skins like pimples. My mother had trouble with the idea of boyfriends.

I read excerpts out to one of my daughters and she said: ‘It’s hard to know whether you should feel sad or guilt tripped’, which is exactly how I felt when I first received such letters, not so much sad because in those days I had difficulties seeing things from my mother’s perspective.

Now when I am older than my mother was when she wrote these letters, I recognise something of her struggle and wish I had been more able to see how hard she tried and how humiliating it must have been for her to have to ask her just-out-of-school daughters, who by then lived away from home on small scholarships – the first time any money ever came our way, and needing to stretch it out to pay rent, buy clothes and food and survive – to have our mother see us as flush enough to be able to offer to help her pay school fees for our younger sister still at school.

It must have galled her. 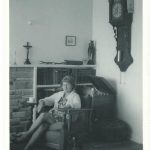 My mother around this time.

It would gall me to need to ask my children for money in this way, but my mother asked all her children for financial assistance when we first came into money. After my father died when she became a little more self sufficient but then she remarried a man who cared for her well when he was alive for some seventeen years, but even he managed not to leave her much to go on with for the next fifteen or so years and once again in her old age we kids needed to support her.

By then I did not begrudge it, and wanted to protect her from the humiliation of her unmet needs, a woman of her times, a woman who left school at fifteen to help her parents keep house until she married and then had countless children and then migrated to Australia and lost much of her family support, even though a number of her brothers also migrated to Australia.

A sad story, a common story, a story that bears retelling.