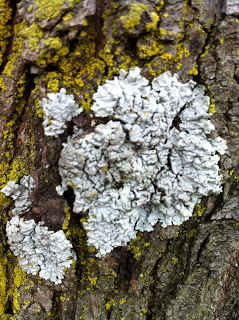 In my dreams my skin erupts in
patches of green moss or fungal like growths that seem strangely natural in the
dream state but when I wake up I am filled with revulsion.
What is it that has
over taken my skin?
Our dog has a warty lump on one of
his hind feet between his claws.
The vet diagnoses it with one of those inexplicable words doctors use
to describe something with which they are familiar but to me is gobbledy gook.
To her credit, she then explained
that this lump might simply be a wart of some sort or it could be a cancerous
growth.  The latter is unlikely in a dog so young.  Whatever
it is, it seems to be infected.  So
rather than rush off to do a biopsy, which would probably be indeterminate
because of the presence of infection, the vet said, it’s better to put the dog
on antibiotics.
One large pink pill divided in
half, twice a day for ten days. I disguise the pill in a small cube of cheese
which the dog woofs down.  So far
so good.  The lump seems to be getting better.
I should call this the week of skin
growths, because like the dog I developed a strange growth.   It started only a couple of months ago, this little
lumpy thing in between my beasts where the skin is whitest, right there in
the middle of my cleavage.
Probably nothing, my GP said, but best to be rid of
it.  She did not want to remove it
herself from such a delicate location because of potential scarring. Better to take it to a skin
specialist, a surgeon.
Mid week,
said surgeon chopped out the growth.
He would have let it be, he said, but he could not quite determine what it
was from sight and touch.
It could be what I call an ageing
lump, otherwise known as a senile wart – great terminology, the surgeon and I
agree – or a seborrheic keratosis in medical jargon, or a basal cell
carcinoma.
It was neither of these.  The surgeon rang yesterday with
results.  ‘Good news,’ he
said.  ‘We could have left it but
we would not know for sure.’
Mine is a case of Lichen simplex,
a benign lesion that erupts on the skin through sun damage, more a
dermatological issue, the surgeon said, than a surgical one, whatever that
means.
Diagnosis seems to be the essence
of medicine.  Name a thing,
categorise it and then decide what to do with it.  In any case the surgeon is pleased with this good news but a
little concerned about possible scarring.
That part of the skin there in the chest area has a tendency to over
heal, the surgeon told me.  It can
become hypertrophic.  It can
over-heal.
If I wind up with a nasty red
thickened scar –  a hypertrophic
scar – then I must get back to him.
He will treat it with steroid injections and something else, the name of
which I missed.
So my dreams have come true.
I’m fond of lichen, are you?  I’ve always enjoyed the patterns lichen
makes on the side of trees or on one side of the roof.  Lichen prefers the side that gets the
least sun.  The shady side.  And people have been known to use the
appearance of lichen as a direction finder.

In Australia the lichen grows on
the south side.  In the northern
hemisphere it’s the other way around.
A therefore useful plant.
But the idea of lichen growing on my skin is worse than the idea of a
wart or a pimple.  These hard scaly
barnacles, a sign of aging no doubt, but also of what?
Are you feeling squeamish?  It’s a strange thing, this talk of the
body gone wrong, especially on the surface of the skin.
When I rang my daughter from the
surgeon’s rooms to say I’d be late home because he was taking off the growth,
her immediate response was one of ‘yuk’.
Nor can she bear to look at the
dog’s paw.  I must say I don’t
enjoy looking at the dog’s paw either, and now this growth of mine, like
something grisly from one of my fungal outgrowth dreams, sends shudders of the
uncanny through me.
You now the notion of the
uncanny?  Freud wrote about
it.  An object, an experience that
is both comfortably familiar and at the same time repulsive.  It has an edge to it, the familiar gone
wrong, like snot from other people’s noses and ear wax or craggy growths on
otherwise unblemished skin.
Rough dry lumpy bits that erupt on
the surface of our skin  remind us I suppose that we are growing old like crusty old crabs.  I have seen
several of these crusty fellows on
my husband’s body and more recently they’ve started to erupt on mine.
And the paradox is that just as our
skin develops dry scaly patches it thins and loses its elasticity.  My mother’s skin at 92 is almost
translucent.
Her skin has become as my skin in dreams when I
can see from the outside in, and the surface of my skin is as transparent as glad wrap, or as barnacled as the bottom of a boat.