The world feels heavy at the moment, too heavy.

Three weeks ago, I fell against the pavement, the result of trying to do too many things at once.

I copped a fat lip from this fall, which morphed into what I thought was a cold sore, at least that’s what the doctor reckoned.

So off onto cold sore treatment and it’d be gone in a few days, the doctor said, but it never healed and now the ailment has spread.

When I was young I suffered a cold sore almost monthly. I grew accustomed to the dreaded tingling in my lip, the swelling into a blister and the ugly sore that followed and usually took as many as seven days to heal.

I knew early on that this ugly beacon in the centre of my face, was more apparent to me than to others, but there’s something about our lips, that most central organ of communication that commands attention.

When we talk to one another we tend to look to the eyes but also the lips. It’s how people who cannot hear often communicate and I reckon it’s part of how we register one another’s feeling states.

In any case, my lips are a mess at the moment, those two sensitive layers of fatty tissue that rest around my mouth. 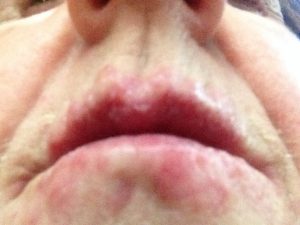 Lips are so sensitive at a number of levels beginning when we’re babies. The place of first skin contact, in feeding, and later the area of contact between lovers when first they come close.

I’ve often wondered why I landed so many cold sores when I was young. I came to understand they had something to do with a virus that lived permanently in my lips and that flared into action during times of stress.

So you see my lips are prone to ailments.

My mother wore red lipstick to cover hers and the sight of her streaking the two red lines across her lips left me with a strange sense of horror, as if she was hiding her vulnerability under something  sexualised for my father.

At least that’s how I saw it when I was growing up and something in my mother’s use of lip stick resolved in my mind, I would never use it.

I’ve tried, but lipstick leaves me with the feel of band aides stuck across my lips, as if I’ve been gagged.

And so I don’t wear the stuff.

But ever since I smoked as a young woman, my lips began to dry out and like so many others around me, I need to moisturise them constantly.

Dry lips, lips like cardboard, leave me almost with a sense I cannot open my mouth.

Last November before the first of my bad luck in Japan, my lips morphed from a cold sore to a patch of redness just below my bottom lip that my GP was concerned about enough to send me off to a dermatologist who diagnosed actinic keratosis, a fancy word for sun damaged skin that could develop into basal cell carcinoma if left untreated.

The solution is to burn off the damaged area with a special cream they use to burn off warts.

Because the area of damage is so close to my lips I need to take care, to do it outside of summer.  Wait till Easter time, the dermatologist suggested, once the sun settles and then start the treatment.

This treatment, which I’ve yet to start, horrifies me.

The idea of applying this Efudex cream to a small area of my skin, is like dabbing on acid and waiting for the area to swell up to peel and flake and in between times to throb and to hurt as though I have inflicted a wound on my skin, a wound that should be visible to all.

And so I hesitate and as Easter time draws near, I worry and even more so as the redness around my lips seems to be spreading and I can’t use this stuff over large areas, at least the instructions tell me so.

Therefore, I’ve made another appointment to see the doctor and the hypochondriacal part of me expects the worst:

That they will have to cut out chunks of my lips that have become cancerous.

That the cells of this actinic mess have dug so deep I’ll be like Sigmund Freud with his cancer of the jaw, and all of it visible.

You can’t bandage your lips, or not as far as I can imagine.

I should leave it settle until I see the GP and have a more accurate appraisal.

I hate the ‘worried well’ of me. The hypochondriacal me who expects at any minute to come up against impossible body states that signal my death.

I’m not ready to die yet, and in all likelihood, I’m not dying.

I feel ashamed in the face of other people’s far greater suffering. But I have so much to do, so much to get through and so many responsibilities to others.

And that’s only the start of it.

In between this preoccupation with the state of my lips, I have others who worry me, and I can’t write about them and their stories, but I know how much my concerns over them contribute to the load.