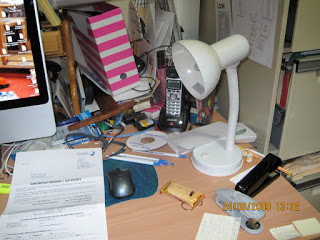 I have a small nick on the tip of
my finger which hurts whenever I press it down on the keys.  I helped one of my daughters to pack up
the contents of her house the other night and made the wound worse.  The dry blackness of newspaper ink
seeped into the cut as I wrapped up her drink glasses one after another and laid them
out in a box.
I hope the glasses make the journey
safely today.  I will help to unwrap
them at the other end this afternoon, once the removalists have carried all the
boxes from one suburb to the next.
My daughter is not moving far, at least not geographically but
emotionally it’s a huge move, as moves tend to be.
Another of my daughters took a look
at my desk the other day, strewn as it is with papers and books.
‘It makes me giddy just to look at
it.’

Her words resonate with my mother’s
words.  When I was a child and refused
to wear a jumper even on the coldest of days she said to me repeatedly as I
remember ‘It makes me cold to look at you.’  I wondered then how my lack of clothing could so affect my
mother as she pulled her thick cardigan around her shoulders and shivered.
How easy it is for us to affect one another.  Even a glance, a scrunching of eyebrows
a wrinkling of the forehead can say a thousand words and leave the person on the
receiving end in paroxysms of despair.
That is when we know one another well.
But even when we don’t know one
another well, looks can still kill.
A car pulled in front of me the
other day.  I had not noticed the
car there on my left in two thick lanes of traffic until it had pulled in front of
me.  I held back to let the driver
in.  I saw his window go down and
his arm shoot out.  I had expected
a wave of acknowledgement.
‘Thanks,’ he might have gestured,
but no.  He gave me the bird.  That’s the expression people use when
someone points up their rude finger.
Their rude finger, their index.
It did not shock me so much as
puzzle me.  What had I done
wrong?  Why had I offended
him?  I assumed it was a him.  The arm looked like a his but it may
have been a hers, her index finger, her offence.
It matters little in the scheme of
things.  It matters to me a little
less than the way I felt on another day when I had pulled out in front of another car ahead and momentarily blocked the path of an on coming car – nothing
dangerous, everything in slow motion –
at the junction in Camberwell, and the person driving the car coming
towards me, which did not in fact need to slow down much before approaching my
car, wound down his window – again it was a he   – and spat a great gob of whatever
onto my wind screen.
There’s something shocking about being
spat at, however much I might have deserved a reprimand.  This one got under my skin such that I
cannot forget.
On another note, I’m getting cold
feet on the Keiser training.  To
think I’d need to do this exercise twice weekly for the next however many years
puts me off.
On the other hand, is it so
bad?
And on the other hand, it’s
expensive.
On the other hand, how might I feel
in the long run when I no longer need to carry around my burden of guilt for
neglecting my crumbling bones?
At least I have managed to get a
bandage onto my wounded index finger.
It no longer hurts to type.
If only other wounds were always so easily
healed.