‘Don’t tell anyone I told you this,’ you say.

‘Don’t tell, and I’ll fill your head with thoughts that you must keep to yourself. You and I are in on this alone.’

Only we’re not alone, others know but it’s up to them as to whether they share this information.

I would not want to be seen as someone who gossips, or who shares secrets around.

And so it goes.

Once again, I’m sworn to secrecy.

I have secrets, but I keep them to myself.

I tell no one my secrets because once I tell, they’re not secret anymore.

Let’s face it, secrets generally hold more than one person in their web.

Sure a person can have a guilty secret: I smashed a window down at the housing estate when I was young. I did it alone in a fit of rage and I’ve told no one. Don’t tell a soul.

This is a secret one person can hold onto alone.

At a conference, Maria Tumarkin once said that children are like ‘sniffer dogs for secrets’. She used the example of her grandmother who picked at the crumbs on their dinner table even as she’d had plenty to eat.

As a child, Tumarkin could not understand this behaviour but she recognised in it the seeds of something unspoken, and in time learned the secret of her grandmother’s traumatic past.

When she herself was young, Tumarkin’s grandmother starved during the pogroms in Russia.

Tumarkin knew there was a secret, one her grandmother refused to discuss at the time.

So many secrets and most of them pass us by unnoticed.

Given I grew up in a family of secrets, every day a secret, my father’s behaviour towards my sister in the night, a source of shame to our entire family, I learned to keep secrets.

Is it shame that makes us keep secrets, our own shame or the shame of another?

One of my brothers insisted, even when we were adults that we keep my father’s story a secret until certain people were dead.

He never clarified those who should die before the secrets were out. Was he protecting these certain people from the shame of exposure?

There’s a scene in the film, ‘Notes on a Scandal’, where the central character, Sheba, played by Cate Blanchett, is caught out having an affair with a student, some twenty years her junior and given the story is set in the early 2000s in Britain, her act is criminal and eventually she’s taken to court and the parents waiting outside the courthouse are baying for her blood.

The police lead Sheba from the courthouse through the furious crowd and she is in shock. The shock of shame. The look on her face. A look of despair. Utterly recognisable.

Banished from the world of decent human beings, because her so-called friend, Barbara, an older history teacher, played by Judi Dench, reveals her secret, intentionally because Barbara is hell bent on revenge. Sheba had betrayed Barbara by not loving her enough. 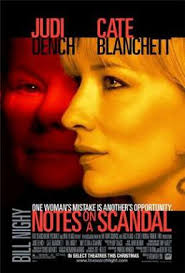 I have a good friend who reminds me regularly that human beings are primitive, even at the best of times.

Put us under pressure and we resort to base human cruelty or degenerate attitudes that show our darker side. We try to stay civilised, at least most of us do, most of the time, but when it comes to secrets, it’s not so easy.

‘Your seceret is safe with me,’ I might say.

I’m good with secrets. I’ve kept my own for years, so why not keep yours?

Though as time passes, we can lose track of who told us what and which of what was told to us is secret, to be held in the dark, and which of what has been told us is up for grabs and open for further discussion.

Some things can slip out.

One of my daughters introduces me to her friends as ‘My Mum, who has no filter’.

No filter indeed. Little does she know.

I, too, have my secrets, my filters. I, too, make decisions about what can go out there into the world as coming from me and what not. And although I might write things she would never in a lifetime let on to other people, there are other things, I hold close to me.

Though at the same time, I try not to let too many of my emotions show on my face when they pop up from time to time because my thoughts are often writ large in the creases on my cheeks, chin and forehead.

I cannot stop a reaction from entering my physiology even as I might keep the words to myself.

I do not like this idea that I am not a safe person to whom you might talk because I cannot keep a secret.

If you want me to keep your secrets, please don’t tell me them in the first place and if they slip out please allow me to be the one who decides what I shall do with them.

Given this is indeed my decision, as it is your decision to keep the things I tell you to yourself, or not as you choose.

I can’t remember ever asking someone to keep something secret, except when I was thirteen or fourteen and my older sister had told me the facts of life to my horror and she had told me to keep the knowledge to myself and not tell my less than two years younger sister who in our older sister’s eyes was too young to know these facts.

I did not agree with my older sister but never told her so.

Instead, there in one of the half constructed AV Jennings houses that littered the empty market gardens of Cheltenham behind our house, I skipped from bare floor beam to bear floor beam and breathed in the stink of untreated wood and of the glue the went into holding some of bits together and told my younger sister all about what my older sister had told me, about what men and women get up to when they want to make babies.

My younger sister was less horrified than I had been. Perhaps because I had forewarned her on the seriousness of or topic.

Perhaps, because she knew things already that I did not know. She who had entered my father’s bedroom when she was home sick after several months of hospitalisation in Fairfield infectious diseases hospital with rheumatic fever. And on the days my father was also home sick or off work after a bender, he had called her into his bedroom and asked her to help him wash his penis.

I did not know this secret then. I have only come into this information in recent times from a source other than my younger sister.

Perhaps because my younger sister would also like for it to stay a secret. More of my father’s shame that becomes her shame because she was still a child and he should have known better than to drag her into something so disturbing as to confuse her about the meaning of bodies and relationships and touch.

There now, I’ve let out another secret.

But they’re secrets I reckon must come to light if only to shake off some more shame.