In the yellow lunch box in which I collected the negatives my father left before he died, I came across a single shot cut loose from another longer line of negatives, which I sent off to be developed.

I imagine my father took this photograph in the days after he had bought a device which enabled him to take the equivalent of today’s selfies.

In this photo my father sits side on, profiled against an otherwise blank wall. He is naked except for his glasses. It’s a grainy shot and my father’s pose is typical of olden day photos in that he sits on a chair facing away from the camera with a stern expression on his face.

My eye is drawn to the thin line along his crossed leg, the way it travels across his body to emphasise the thinness of the man. And his glasses, the only other item in the photo beyond the edge of the chair, his body and the wall are dark and heavy.

His shadow falls to the front. It emphasises his profile and perhaps it’s this shadow he was trying to recreate. 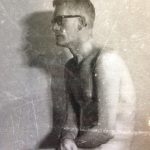 I have another small photograph of my father wrapped in tissue paper for protection. It has faded with age and the image of my father in its centre is difficult to discern. I use a magnifying glass. In it, he is lounging on a cane chair in front of a bunk bed, fitted with mosquito sheets. The picture was taken by one of his fellow soldiers when my father was stationed in Java, Indonesia. At least in this photo he is not entirely naked. 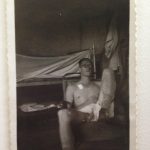 To my adult self, my father’s effort at photographic art fails.

To my childhood and adolescent self, it is the image of an exhibitionist, a man who took his clothes off in front of his wife and children, not because it was hot, but in a bid to disturb them by exposing something of his sexual hunger as an act of violence, thrusting things into view that should have stayed hidden, if only from his children.

From today’s perspective nakedness is scarcely remarkable when every second image on the Internet involves some element of nakedness, or self-revelation, particularly of the female form.

The sight of a naked man, a selfie taken in the sixties or seventies, might not seem so strange, and there are plenty such photos in the books my father kept on his shelf in the days of ‘Do it in the dark’, but to me, my father’s nakedness is matched only by the shock I felt when I first discovered it and its correlates in the photos my father took of my mother, nearly naked but not quite in the Camberwell house, presumably taken some years earlier.

The fact the photo was kept hidden suggests my father wanted it that way.

Fifty years later I bring it to life and reflect yet again on my ongoing struggle with what is seen and unseen.