At times like these, as I sit for hours in hospital, companion to my sick husband, we run out of words to say and we take to reading.

My husband reads the newspaper. He finds books still too much. I read books but in a different way.

The books I read in hospital take on a surreal quality, as if the world on the page is even more alive because of the surrounding walls and sound.

I finished Elizabeth Strout’s Anything is Possible in this way and hoped to goodness that anything is possible.

This book is such a profound evocation of joy and sorrow and an exploration of the way things can change for people raised in poverty in rural Illinois.

And then I finally forced myself to take up Fiona Wright’s Small Acts of Disappearance. I’ve had this book on my shelf for a year now and avoided it, preferring instead the escape of fiction, but this book dragged me into reality.

Wright explores the nature of hunger and how it can sharpen your senses. How hunger when it is the compulsive kind, the seemingly voluntary act of refusing to eat that is the hallmark of anorexia, can be so seductive that eating becomes a torture.

I’ve long known the ways in which controlling your food intake can offer the illusion of having control over your entire life, but Wright’s is control taken to a whole new level.

The obsessional activities, the counting of food, the rituals that accompany the eating, are new to me.

I have a third book in store, once I’ve finished Wright’s evocation of awe at the mystery of  ‘starvation syndrome’, she calls it: Lloyd Jones’s The Cage, his newest book which I bought recently after I heard him speak in Hawthorn Readings.

Jones talked about how easy it is to turn other people into the ‘other’ and thereby limit our compassion or responsibility towards them.

Jones’s book is a type of fable that recognises this worst trait in people in a small country town where two strangers arrive. At first they’re welcomed but over time and in subtle ways they’re ostracised until finally they’re set the task of building themselves a metal construction of indescribable proportions that becomes their cage.

Then they’re left locked inside this cage for the townsfolk to gawp at and be appalled by the stink of their shit, for where else can these two men shit, though even so they try to create some semblance of decency in their small prison.

Sitting with my husband, day after day – he in his hospital pyjamas, though for the past week he’s taken to dressing in ordinary clothes by day – you can see how quickly he becomes the ‘other’ in a hospital setting.

How quickly a person becomes an object. This so especially when the ‘caravan’ arrives.

The caravan, my husband’s name for the team of infectious diseases physicians and specialists, who visit him daily along with one, two or three student doctors.

They come in with one of their team wheeling what looks like a mini supermarket trolley on which sits a digital version of my husband’s history.

The head doctors refer to this history from time to time when they offer my husband the latest details on how his infection is faring.

From test results on his blood, it seems my husband’s body is eliminating the infection. His white blood cell count is down and the markers for infection, which began at 152 when he first arrived in hospital, at last known count, were down to 14.

He needs to get them down to under three before the infectious diseases people will be happy.

It’s like a mathematical exam, which he cannot prepare for and he does his best following the medicos’ instructions to pass.

But then things happen, as in three days ago, after three weeks on antibiotics, my husband’s body erupted in a red rash, itchy and inflamed mostly on his legs and around his ankles. 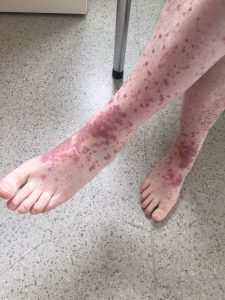 An allergic reaction to the antibiotics, which caused a re-think just as the doctors were about to introduce a PIC line and send him home.

The re-think involves a change of one antibiotic in the hope to settle the allergy, but my husband is on two antibiotics so it involves eliminating the first, seeing whether it’s the culprit and if so, great, if not, they might need to eliminate the second until they can get rid of the allergy and the infection.

A day-by-day, trial and error process.

The doctors watch like hawks hovering above my husband’s bedside sensitive to every nuance and every shift in his condition. All of which is a good thing but it has the effect of leaving my husband feeling like he’s an animal in the zoo with me at times seated beside him, less the specimen but the specimen’s accompanist.

When the caravan arrives and I am there I want to scream at them all, much as I know full well they’re doing an excellent job, they’re doing their best.

I want to scream at them all, ‘Get this man well and get him out of here’.

And I think of Lloyd Jones’s ‘cage’ and the ways in which being made ‘other’ can render you speechless.

I cannot say any such thing to these doctors, only smile meekly when they come by and ask questions when my mind is clear enough to try to understand more.