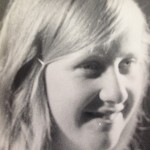 Normally I would not put up another post so close on the heels of the first, but a comment from my real and blogger friend Gretta has inspired me to put up two of Gretta’s poems from an anthology that Helen Annand published in 1998. The anthology is called
The second Worst Thing: Poems on Surviving the Death of a Child.

Gretta describes the poem she has already posted on Dustchange as her one poem on grieving. Perhaps she has forgotten these. I have not and never will.

I’m afraid I cannot format the text as it is laid out on the page in the original, but the words are as intended.

Bobbing, bobbing
in my bed of tears.

I saw how they would be.
Smooth skin, knobbly wrists
jutting from cuffs
on long skinny arms.

smother me in white clay
the cracked mud of mourning

For Christopher who died at 8 months and Joel, at 4 months.