When I was fourteen and my teeth were at their worst – upper and lower rotting molars right through to my incisors and most of them turning yellow or grey – I took to covering my mouth with my hand whenever I spoke, in a bid to conceal their condition.

Even as I tried to hide the state of my teeth from others, I could not hide them from myself. My tongue worried at the jagged edges but the thought of doing anything about this state disturbed me more than the feel of those teeth, the smell of my breath and the threat of exposure.

The thought of a dentist looking into my mouth, one who would pronounce in shock and horror that mine was the worst case he had ever seen, brought such shame I tried endlessly to distract myself.

Whenever an advertisement for toothpaste came onto the television, I cast my eyes to left and right and checked the faces of my sisters and brothers worried that the ad might alert them to the state of my teeth.

These toothpaste advertisements acted as a trigger to a level of shame and anxiety I could not bear. 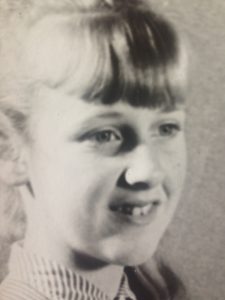 My once rotting teeth come to mind now as I wonder how it is that a person can be triggered, not only by the obvious things that lead to trauma: war, rape and cruelty to animals, but by less obvious things that might mean little to an ordinary person but to someone who has experienced severe trauma can be terrifying indeed, causing flashbacks and slippages into dissociated mind states in attempts to cope with what is unthinkable.

The sounds of a low lying plane over head and its resonance to her memories of the second world war caused one of the women with whom my mother once worked as a cleaner to go into a state of panic so intense she had to be lifted from the floor.

And herein lies the difficulty. There are so many things that might trigger us, depending on who we are and where we’ve been. Which is not to say there are not situations in which we can anticipate that people might be disturbed by whatever lies ahead and it behoves is to put out a warning.

But none of this is black and white and I find myself objecting to extreme demands that we put trigger warnings on almost anything that might unsettle a listener, reader or viewer.

I have my suspicions that the issue of warning people of the risks involved in being exposed to something that might well traumatise them comes out of the ways in which the Internet imposes itself on us as we flick from one image or set of words to another.

These things can come at us fast and once inside, such as an image of grave horror – a beheading or some such ghastly event, something most of us would never want to see – we can’t get the image out of our mind.

Sometimes when I’m scrolling through and sending off to trash the spam that comes into the comments section of my blog, I inadvertently click on one of the details of some random message and catch a flash of naked breasts or a penis that I have no desire to see at that moment.

I delete it, but even then, as if subliminally, the flash of image disturbs me. It’s as if someone is forcing something into me that I had not asked for.

The Internet has a way of imposing itself on you, which might well be one of the reasons there is more of a call for trigger warnings these days.

Or perhaps it has more to do with the sheer complexity and volume of stimuli that surround us everyday from all directions. Most of us filter them out but sometimes it’s not so easy. Sometimes just a glimpse is enough to set us down a path we don’t want to follow. Rather like the ambulance lights flashing at the side of the road can cause us to slow down as we pass to gawk at those involved, even as we might be terrified to see something unbearable.

A body on the side of the road. Blood.

Equally for me when I’m in such a situation I also have the sense that I want to know that it’s not as bad as it might be. I want to know the people are all right. If I think the accident is a ghastly fatality, maybe one involving children, then I find myself affected by it for a long time to come, as if it insists itself into my consciousness and won’t go away.

We tend to develop defensive manoeuvres most of them based on what seems to work best for us as we mature. We can try to turn a blind eye. We can even deny it ever happened.

We can rationalise it away with words of self-congratulation: the accident victims must have been speeding or they were drunk or on drugs. It would never happen to me because I wouldn’t behave like that.

If we’re honest with ourselves we know the adage: there but for the grace of whoever go I. We are all vulnerable as human beings. We are all subject to disturbances.

So I’m all for trigger warnings but we also need some sort of critical analysis on the reasons for implementing them, when and where and why. In part, because life itself offers no trigger warnings.

Trauma happens and trauma is about the wound that comes on unexpectedly more often than not, and demands we find ways of managing its shocking charge without instantly blaming other people for inflicting it upon us.

Nor yet blaming ourselves for being subject to whatever horrors might befall us.