As a gift for my birthday yesterday, I chose a new desk chair, one described as a saddle. Backless, armless and perched on top of a metal post (instead of a horse’s back) it forces me to sit in a way that uses my pelvic muscles as if in Pilates, and helps prevent a bad back.

It’s an odd sensation to sit this way, though not entirely new to me.

In the past, I’ve used one of those backless kneeling chairs, but the man in the chair shop recommended I go for this variety and stop my kneeling as he reckons the kneelers are meant for short term only, rather like kneeling in church. You do it for a time, otherwise you risk cutting off circulation and you can develop trouble in your knees.

What a birthday it was. My daughter and I spent several hours in the afternoon in a vet clinic waiting to have our dog diagnosed.

He’d been vomiting and had become dehydrated to the point where he needed an overnight stay in the emergency department. They speculated he might have had pancreatitis or simply that he ate something toxic.

‘Dogs are scavengers,’ the vet said.

‘A bird will fly over and poop on the ground. The dog will see the poop, think what a tasty morsel and swallow it in one gulp. It could be the size of a pin prick but it can make him very sick.’

Two hours after rehydration, the vet told us Ralph was already much better, but they kept him overnight to be sure and given he was not in his usual bed, he barked all night long, kept the other animals agitated, and barely slept.

I dreamed last night that I rang the vet to ask if Ralph was okay.

‘No,’ the vet nurse said and my dream morphed into something else. I woke relieved to imagine it wasn’t true. Relieved on two counts, for the sake of the dog and for the sake of our budget.
We picked Ralph up early this morning bright and bouncy. A happy dog, tail wagging and ready to go back to his usual life. Only he’s now on a diet of boiled chicken mixed with rice for a few days and I can see he’ll soon tire of that. 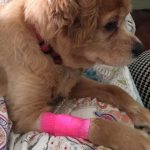 This blow-by-blow account of the antics of our dog reminds me of a recent lunch I shared with a group of lovely women.

For the first hour at least we talked of nothing but the state of our internal organs, our digestive systems, our bowels, what we can eat, can’t eat, and our general health.

The lunch was at a café attached to an organic farm of sorts, Ceres, where people offer classes to teach the next generation about things like permaculture and biodiversity and all that stuff.

Ceres caters for those of us who care about the future of the planet and the menu appeals to all manner of discerning guts. There’s soy and almond milk and kombuchas made of ginger and beetroot juice. There’s also this new favourite thing on the trendy drinkers’ market called a Turmeric chai latte with coconut.

So much fuss. I detect an unspoken etiquette around these things.

At Ceres you can quote specifications, milks or substitutes, with a sprinkle of whatever herb or otherwise your stomach demands, and you can be as nit-picky as you like.

It’s all about healthy living and individual requirements more than taste because some of these drinks – I tried the ginger beetroot Kombucha – were awful. Like medicine.

So we women emulated this recent preoccupation with of the state of our dog’s gut and our conversation took on that endless quality of bodily introspection which bores me even as I write about it.

We even joked about the fact that three of our party were about to have colonoscopies.

And then the news came, two days ago, that my ninety-year-old uncle, a Fransciscan died in Brazil. There he had spent the last several decades of his life dedicated to his parish in an impoverished community called Alcobaca.

From all accounts, this uncle, whom I met only a few times when he visited Australia, was a good man. He was a man who cared about his calling, who cared about his parishioners and did not reflect the image of Catholic priests today as paedophiles and hypocrites.

There have been many Facebook tributes to my uncle floating through cyberspace and most of them in Portuguese.

My mother had five brothers, only one of whom still lives. Her sib ship of seven is nearly over and it saddens me to think of my mother’s family, her great anchor in the world, as coming adrift, as no more.

My mother loved her siblings in a way that sometimes left me feeling as if she cared more about her brothers and sister than she cared about her own children.

Something of her childhood stayed with her. The greatest childhood imaginable she told me, but then again my mother was prone to look on the bright side and I suspect there were many times when it was not so wonderful.

Certainly, it was not so wonderful for the ones below my mother, or so my aunt would tell me when she too visited Australia or when I visited her in Holland.

When I pored over the photograph albums in childhood there were pages devoted to the ordination of two of my mother’s brothers, both ordained Franciscans, both dedicated to the life of the priesthood, though one became a missionary and the other’s life seemed more troubled. 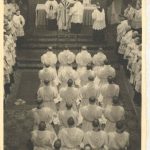 The older of the two went blind several years before he died. He suffered the same macular degeneration my grandfather suffered. My grandfather also spent something like the last decade of his life in blindness.

It becomes one of my pet horrors this blindness, which seems to be a genetic attribute from my mother’s side.

The irony does not escape me. My mother who was adept at turning a blind eye at times when she should have had her eyes wide open, came from a family with an affliction that could cause blindness.

Or so runs my understanding of denial.

‘We do as if nothing is wrong’ my mother said more than once.

Let’s just carry on as though the dreadful things around us, a drunken father walking naked through the house is not there, not to see, not to worry if we just close our eyes and minds.

It drove my father even madder than he might have been. Not that paying attention to him helped either.

I imagine, my mother would have much preferred the life of a missionary in the villages of Brazil with her beloved brother visiting the sick and needy, helping with Mass on Sundays, but instead she landed in Australia with nine kids and a heathen drunken husband.

I’m lucky. I have so much less to complain of, an ageing body and a nine year old dog with gut problems. Plus, I have a great chair in which to sit pain free, however many hours I write. But I must beware of my PollyAnna impulses and my mother’s blind eye.