I read online about spoon theory, this idea that every morning when we wake we have a number of spoons full of energy for the day and most of us don’t even think about it. We simply get up and go about our business oblivious to the notion that every activity we undertake requires a number of spoons of energy.

We assume we’ll have enough for every part of the day until we can collapse at night.

For people with chronic illness, people who suffer from all manner of ailments that reduce the number of spoons in their possession it can be especially difficult.

They need to be aware of their reserves of energy. They need to calculate how many spoons it will take to get dressed for instance, how many to prepare and eat breakfast and so on throughout the day.

It’s even more dreadful for someone who once had unbounded energy to suddenly find themselves in this depleted position.

For most of us our energy levels taper off as we age. I’m lucky I still tend towards the energetic, though I notice I’m not as fast with the housework as I once was, and there are tasks I’d have undertaken, like ironing or cooking that I have to drag my feet towards. Once I’m into them it’s fine, but there are other things I’d rather be doing or so I reason, and these once easily scratched off jobs take longer if at all.

The older I get the more I’m struck by the amount of information out there in the world that calls for my attention. It throws me back to the days when I was young and took pleasure in dragging out one of the encyclopaedias from my father’s library to look through the various items and events listed in alphabetical order.

One day I noticed some pages had come unstuck and were about to fall out. This in the days when I collected poetry, and the snippets of poems I had in my possession became my treasures. I pored over them at night for company.

On page 7027 of Volume ten, I came across John Drinkwater’s ‘The Crowning of Dreaming John’. I eased out the loose pages and filed them away for posterity.

The poem tells the story of John of Grafton who took seven days and seven nights to travel through the back lanes of England to see ‘ A king put on his crown’.

John brought with him a shilling, a whole silver shilling. ‘But when he came to Westminster They wouldn’t let him in.’

You’d have thought he’d be bitter, our John, but no, instead he smiled at the crowds of people, turned, ‘whistled and was gone’.

That evening after he had walked for twenty five more miles, through ‘the twisting roads of England back into the Warwick lanes,’ he stopped to rest.

The accompanying illustration showed an old man stick and swag in hand settled against the bough of an elm, his eyes focused upwards.

As he rested ‘the spirits of trees and pools and meadows, mountain and windy waterfall, …clouds and skies and rivers, leaves and shadows and rain and sun’ descended from on high. 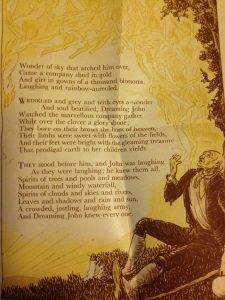 They came with ‘a sound of singing and chiming music’ and bore ‘aloft a flashing crown.’

So although Dreaming John had travelled to London his trip was not in vain for ‘in a summer evening, along the scented clover’  Dreaming John of Grafton held ‘ a crowning of his own.’

The story captured my imagination to the point when I read the words over and again and slide my eyes across the old fashioned images, I spill over with joy and sorrow. This old man so unlike anyone I had ever known became an example for me of hope over adversity.

Now to find ideas and images, I use Google and Google offers so much more but I sometimes cop that strange overwhelmed feeling I once had as a child when I met Dreaming John and first discovered the meaning of the word infinity.

The idea that numbers go on and on and on. That there is no end to time, as far as I knew when I was a girl. Things can be endless.

This in contrast to the fact of limits and the ideas of death and the awareness that hits me more and more as each day passes that there is only so much you can do in one lifetime.

Maybe I need to conserve my spoons full, though most of me reckons to hell with it, spill my spoons, spend my money, live life to the full and when the time comes and I’ve nothing left, find another way to survive until I’m dead.

Or have a crowning of my own.