You learn these things early. Your place in the scheme of things.

When I was little, girls wore hats to church on Sundays.  By the time I reached adolescence, a mantilla, whose name derived from the Spanish, a triangle of black or white lace, would do.

Sometimes when someone had forgotten her hat or mantilla, she spread a handkerchief on top of her head and held it there with hair clips, like a peasant’s headgear against the burning sun.

Cover your heard if you are a woman in honour of God.

I never questioned why it was that women needed to cover their heads and not men.

Subtle hints in my mother’s voice when as a ten year old I walked around the house without a t-shirt on the hottest of days, walked around half naked like my brothers.

The boys were free to go on paper rounds, to ride their bikes through the streets after dark while we girls stayed at home to wash dishes, sweep floors, make beds and keep our home tidy.

My father was six foot three inches tall, my mother five foot two. Somehow their height became a measure of their status. His an all powerful presence, she a submissive and delicate woman who worked her way around pleasing him at every turn.

Only later did I realise my mother never asked for things, at least not directly, and certainly not from my father? She kept a low profile flirting only when we had visitors, with men and women alike, chatting endlessly to the family – her family also from Holland – who visited on Sundays.

She passed around the biscuits, shop bought on porcelain plates and poured endless cups of tea, while he, ever gruff and stiff in his chair, tried to attract attention but could never raise the interest that my mother raised as she slipped from person to person with her smile and enthusiasm and energy.

It faded as soon as the visitors had gone when once again my mother stood over a pan of sizzling steak or boiled potatoes in a routine of meal preparations that left her silent.

The boys won at games of marbles on the hallway floor, their aim was steady while mine slipped. Their thumbs could propel the marbles across the room in one flip while I needed several faulting tries to get the marble half way to where I wanted. Mine stuck in the worn out sections of carpet where the wool was ground down to bare webbing from too much walking.

Even as the unspoken rules told us to keep ourselves hidden there was a flipside.   The call to be visible and beautiful and all things desirable in the eyes of the man who would one day choose you as his own.

My father stitched our mother’s dresses from material they bought together at the fabric shop. Bright floral patterns that my father fashioned into tight waisted and low cut frocks my mother wore most days in the summer.

Perhaps the fact that my father had fashioned those dresses gave him licence to rip them off her in moments of rage. My mother like a servant in the kitchen preparing the family meal became a woman undressed, her face flushed, her eyes ablaze with fear as she grabbed at the scraps of fabric left hanging around her hips while my father glowered with indignation. 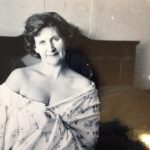 In a 1975 interview available on YouTube, Michael Parkinson talks to a fresh faced Helen Mirren who wears a long black dress and holds a feather in her hand, which she says was meant for her hair but looked ridiculous so she carried it instead.

She waves it around from time to time during the interview as if she is playing into Michael Parkinson’s insistence that she is a sex goddess, an actress who seduces and flirts as part of her trade.

He asks about her physical attributes and she insists he spell these out. And Michael Parkinson who sits cross legged in his swivel chair in blue suit and tie almost laying back in comfort content to preen and pose questions in his fine British voice asks what’s it like to take her clothes off for the screen.

Does it demean her as an actor?’

Helen Mirren slips in and out of irritation. She tells him it would help for everyone on the set to take their clothes off, too; the director, the producer, the camera men, the other actors, that way she, the actress – because it’s almost always the actress – need not feel so alone.

Was that the way my mother felt in the kitchen all those years ago after my father ripped off her clothes? So visible and yet invisible. On display for all to see, but without ownership of her body, alone like Susanna and those elders. 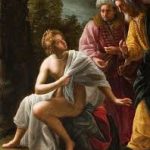 My father collected art books which I pored through as a ten year old and there too I observed the same phenomena, the naked women sometimes with snippets of material draped around their shoulders or between their legs, exposed for all to see but behind their eyes, no one there.   And the men in robes, the fancy clothes of medieval times, dressed up like peacocks admiring the object of their desires.

Is this what it means to be invisible, to be an object?

I learned early to hide my body behind clothes while at the same time displaying myself as an object of desire once puberty hit and I discovered like my mother before me I had these things called breasts that were of me and not of me. They belonged to me, but were also a source of desire for the other.

When my father visited my sister in bed at night even before she had reached the age of breasts and child bearing hips, even before she wore bras and needed stockings held up with suspender belts instead of socks, then I knew to keep myself invisible, to hide from him, to hide from men, or at least to hide my inside self from them.

I could perform like the women I saw in the movies, the women on the bill boards my mother with her visitors. I could wear clothes that hugged my body once I had lost weight in an avalanche of starvation once I hit my late teens but it was only the objective me, the displayed body open to view.

The rest I hid inside.

I still hide her but now it’s easier.

A woman over fifty ceases to be visible. Helen Garner describes this as a freeing time, no longer sexually available, no longer on the sexual market and therefore no longer needing to set ourselves the goal of external beauty for the camera.

But a different kind of angst arises when you fear your image as an older woman marks you as one not to be taken seriously, as one to be ignored.

It is a joy to hide, Donald Winnicott writes when describing the game of peek a boo as played by babies, of disappearing and then reappearing, but a tragedy never to be found.