It’s time I invested in a separate table for my jigsaw puzzle pieces.

The other day, one of my grandsons knocked over his water glass at dinner and water cascaded the length of the table down to my incomplete jigsaw puzzle where it enveloped several pieces.

This is an excellent puzzle with thick cardboard pieces, a few of which have now come unstuck from their base, like a wedge heel coming off a platform shoe. The pieces are intact but split down the middle.

My husband reckons we can glue them back together once dry but somehow their unstuckness represents so much more than a few unstuck jigsaw puzzle pieces.

The dog just joined me at my desk and is now there at my feet eager for company in the way of dogs.

It amazes me how little he needs by way of comfort, just the simple proximity of a human will do. Whereas we humans seem to need and want so much more, so much more that life can become a grind of satisfying our own and one another’s expectations.

I feel this strongly during holidays when my own expectations of getting a rest don’t necessarily match the events that life throws up and I’d prefer not to have the added burden of expecting to a rest on top of the usual stresses.

The other day, I heard Robert Dessaix on the radio talking to David Mann about Dessaix’s book The Pleasure of Leisure and the whole time I listened I found myself annoyed.

There was something cosy about the two men chattering to one another with their various definitions of laziness and indolence versus idleness. And they were talking from an historical perspective as well.

I only caught the opening of the talk, which was just as well. By the time, I pulled into the driveway of our house I had had enough of what I heard as the privilege of two older white guys going on about the need to take things easy.

These days I hear everything from this perspective.

Who is the privileged one – including myself at times – and who gets to do the work?

I’ve got it in for male writers at the moment, with apologies to any of my male readers here.

Yesterday, I went to the en suite bathroom and noticed my husband’s book, one of several he has on the go. Chris Masters’ book, No Front Line.

Could this be the same Chris Masters, journalist, whose mother, Olga Masters, I first heard about and read when I began on my writing journey forty years ago? She who had something like six children and who did not start her own writing career until later in life when her children were more or less grown and then she became a brief sensation in the literary world before dying young, or at least young in relative terms.

It saddened me then and it saddens me now. Her life cut short, her life split in half, between her obligations as a parent and her life as a writer.

How would it have been had it occurred to her she could have started earlier? And she might well have started writing earlier but it took till mid to later age before she could venture into seeking publication. And it all takes so long.

So there is Chris Masters’ book on the en suite vanity and I dip into it and read about war. I recoil at the language and at the pictures. Not a woman in sight except perhaps some poor peasant woman from Afghanistan caught up in the fighting and I despise war and the stuff that brings it about.

This violent approach to life polarises us and I know full well women can get into it too but women are not the drivers of war.

I helped my younger grandson make a gun yesterday out of an offcut of wood and a Texta, one of those Textas with a cap out of which a section protrudes onto which you can attach the caps of other like Textas so that they join in a row.

He used this section on the cap as his trigger and needed my help to fit the Texta and wood tight together with sticky tape so that he had his gun ready for firing then walked around the house shooting at imaginary targets.

I know these ways of operating are learned, constructed not hard wired and that he picked up such ideas from his online experience and from his older brother and peers, and it’s not a tragedy, it is what it is.

No matter we don’t run around with guns in Australia, my grandson is still drawn to them for all the complex reasons available to our understanding.

But it too feels spilt to me, between the need to develop some understanding of the dangers of guns and not idealise them as little boys do and the need to tolerate his aggressive impulses and learn to tame them as we girls are taught from earliest days to tame ours.

I was annoyed with my grandson when he spilled the water not that I carried on too much about it.

It was, after all, an accident, but it still rankles to see my jig saw pieces  damaged just as I was beginning to get into this new bright and cheerful experience.

Of putting together another world.  A cacophony of cats. 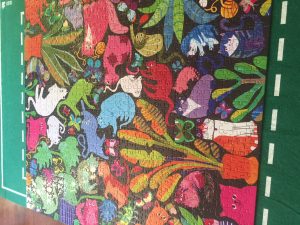 My jig saw on completion with the split pieces no longer visible.